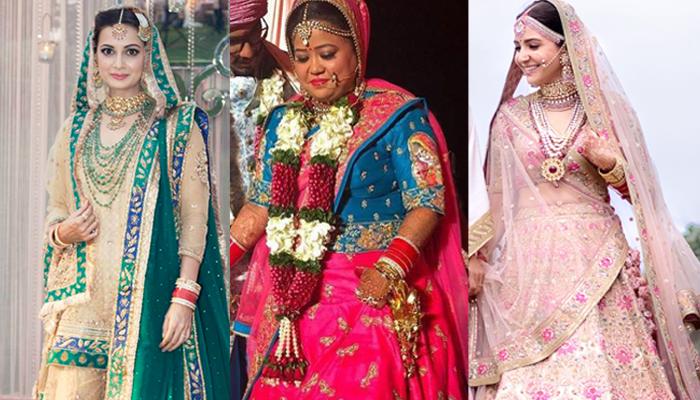 Red has been the age-old traditional colour for Indian brides, much like the white gown is for the Christian ones. Though for long, red has been considered to be a staple when it comes to Indian weddings, especially North Indian, but brides nowadays are often seen experimenting with different colours. Many a times, their hearts even move in the direction of unconventional colours, like whites and greys, when they are out selecting their wedding outfit.

Recommended Read: 15 Best Picks From Ace Couturier Manish Malhotra's Bridal Collections That You Will Lust Over

When it comes to fashion and style inspiration, one person in whose direction almost every girl would turn, is her favourite Bollywood divas and television actresses. Our actresses are not far behind when it comes to leaving behind the “staples” and embracing new trends. Take a look at a few stunning Bollywood divas who went for “non-red” wedding wear on their special day.

The Bollywood actress, Dia Mirza, let go of her “Miss” tag, and chose anything but red for her wedding. She wore a stunning beige and turquoise blue sharara, designed by Ritu Kumar. Well, leave aside the wedding day; this diva did not wear anything red for any of her wedding ceremonies.

Sharmila Tagore wore a ravishing golden gharara for her nikah when she tied the knot with the Nawab of Pataudi, Mansoor Ali Khan Pataudi. It bedazzled many; and it was so stunning that years later, even her daughter-in-law, Kareena Kapoor, wore the same outfit on her wedding day.

Recommended Read: 7 Absolutely Stunning Looks Of Sharmila Tagore For The Mother Of Soon-To-Be Brides And Grooms

One of the most beautiful women in the world (unarguably), decided to wear a golden-yellow saree for her transformation from "Miss" to "Mrs." According to sources close to the actress, she never had the colour “red” in her mind in the first place and wanted to try on something else. So, on her wedding day, no part of Aishwarya Rai’s outfit had the colour red in it.

When Soha Ali Khan tied the knot with her long-time boyfriend and actor Kunal Khemu, she decided to ditch the traditional red on her wedding day. Just like her mother, who wore a golden dress at her wedding, Soha chose a resplendent off-white lehenga teamed up with an orange dupatta. The traditional maang teeka of a Muslim bride, passa, completed her look.

Gul wore an onion pink lehenga on her wedding day, which was complemented by spectacular jewellery, made her look gorgeous and alluring. Famous designer JJ Valaya designed her lehenga and it had intricate golden work on it.

Bengali beauty, Konkona Sen Sharma, married Ranvir Shorey in 2010, in a delightful golden cream saree. She matched it with traditional jewellery, which belonged to her grandmother. She looked stunning and became yet another successful example of deviance from the colour red.

Karisma too steered clear of the colour red on her wedding day. She chose pink bridal wear that made her stand out from most of her contemporary brides. She went with an intricately embroidered lehenga choli, matching jewellery, traditional chooda and kalire, and she carried it all off so effortlessly and beautifully.

When actress Neelam, tied the knot with TV and film actor Samir Soni, she chose a subtle beige saree with a simple red border. Yes that, and a red shawl were the only hints of red in her look. Rest of her D-day look was kept sober and subtle.

Wedding of the decade, as many chose to call it, Anushka Sharma and Virat Kohli’s wedding on December 11, 2017, swayed everyone with its glamour and uniqueness. For her wedding avatar, Anushka broke the tradition and wore pink. Sabyasachi described her attire as, "Anushka wore a pale pink lehenga with Renaissance embroidery in vintage English colours embellished with silver-gold metal thread, pearls and beads. Bridal jewellery handcrafted with syndicate uncut diamonds, pale pink spinel and baroque Japanese cultured pearls by the Sabyasachi Heritage Jewelry collection.”

Aisha and Kai Po Che! actress, Amrita Puri tied the knot with her long-time beau, Imrun Sethi who is a restaurateur. The couple got hitched in Bangkok on November 11, 2017. For her wedding dress, Amrita chose an ornate off-white and gold lehenga. Her diamond choker, and golden kalires along with other jewellery, rocked her wedding look.

Kurbaan and Anwar actress, Nauheed Cyrusi got secretly married to her long-time boyfriend, Rustom. The couple had an intimate Parsi wedding on January 5, 2017. Nauheed looked stunning in her traditional Parsi bridal attire, a white saree with Swarovski. She radiated a look like a breath of fresh air in her blush-toned saree with embedded pearls and intricate Swarovski crystal panelling.

Asin got married to the CEO of mobile giant, Micromax, Rahul Sharma on January 19, 2016. For her wedding, Asin wore a golden lehenga by Sabyasachi Mukherjee (for her Hindu wedding). Her entire wedding attire, teamed with diamond jewellery and gorgeous maang teeka, made her look gorgeous.

Hrishita Bhatt and Anand Tiwari took the wedding vows on March 4, 2017. Hrishita also broke the wedding tradition of wearing red and looked stunning on her D-day in a heavily embroidered orange-red ensemble by Preeti Singhal. She chose to wear heavy choker set along with a beautiful pair of juttis. She looked very ethnic and beautiful in her wedding avatar.

Laughter queen, Bharti Singh got married to her long-time boyfriend and scriptwriter, Haarsh Limbachiyaa, in a Goan beach wedding on December 12, 2017. One of the most popular female comedians of India, on her D-day, wore Adhya’s blue and fuschia pink lehenga with a beautiful Swarovski worked dupatta. From her jewellery to her makeup to her hairstyle, everything was on point.

You May Like: Stylish Outfits Every Plus Size Bride Can Steal From Comedy Queen Bharti Singh

Anita Hassanandani got married to Rohit Reddy on October 14, 2013. For her wedding, Anita, however, chose to not wear red. She went for a typical South Indian bridal look on her wedding day. She draped a gold and white South Indian Kanjeevaram silk saree and completed her look with a gajra. She paired up authentic temple jewellery in gold and pearl.

TV actors, Dipika Kakar and Shoaib Ibrahim, got hitched on February 22, 2018. Breaking the tradition, in her wedding look, Dipika looked mesmerising in a pink sharara which she accessorised with kundan jewellery and passa. Just like a quintessential Muslim bride, Dipika looked ethereal in her bridal look which was enhanced by her kalire.

Aakanksha Singh got married to Kunal Sain on 7 December 2014. She chose to be a colourful Rajasthani bride. Her lehenga was in bright pink, orange and blue colours with Jaipuri embroidery. Her eyes were well done, while other features were not too loud. Her jewellery was in kundan and she wore a traditional borla.

TV actress, Panchi Bora and her boyfriend, Jaydeep took the wedding vows on January 17, 2017. For her wedding look, Panchi looked stunning in her beige-coloured elegant saree teamed up with minimal makeup and sleek gold jewellery.

Also Read: Dear Ladies, This Is How You Can Add Ruffle To Your Bridal Outfits If You Love To Twirl

Kratika Sengar and Nikitin Dheer walked down the aisle on September 3, 2014. The Jhansi Ki Rani fame actress flaunted a heavy and stunning lehenga in pink and red. Her blouse had beautiful net sleeves with zircon work on them.

Apart from these dazzling divas, many actresses have stayed away from wearing 'red' wedding outfit on-screen as well. Shilpa Shetty in Dhadkan went for a blue lehenga while Priyanka Chopra in Hero: Love Story of a Spy chose a white and gold lehenga for the wedding scene. So ladies, if you too do not feel that red is the colour you want to go for, then you can be inspired by these stunning and dazzling Bollywood divas.