Fan Forcibly Tries To Click A Selfie With Taimur Ali Khan, His Nanny Hilariously Shoos Him Away

Fan Forcibly Tries To Click A Selfie With Taimur Ali Khan, His Nanny Hilariously Shoos Him Away 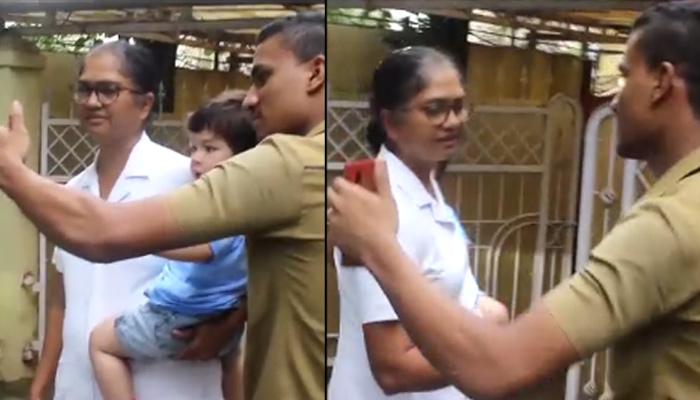 The very mention of his name is enough to make anyone go all ‘awww’! Taimur Ali Khan is the definition of celebrity ‘by-birth’. Having a bad day? Check out a Taimur Ali Khan photo! Have to impress your girl? Just tell her that you are equally fond of Taimur Ali Khan like her (which you already are!) and you are all sorted! As unbelievable as it sounds, this is the charisma of this one-and-a-half year old munchkin. (Recommended Read: When Taimur Ali Khan Made A New Friend On His First Day At Playschool, She Is Equally Adorable!)

Taimur is growing up fast and every new move and update of this munchkin becomes a headline overnight. Quite obviously, looks like the cheesecake understands the paparazzi running behind him since early childhood. In a particular tit-bit about the adorable Taimur, the munchkin was seen along with his momma, Kareena and his nanny, going towards Kareena’s mom, Babita’s house. Just as Taimur sees shutterbugs ready with their camera, Taimur frees himself of his mom’s clutch and poses for photographers! Here’s a picture of the same:

Looks like good looks run in the veins of the Pataudi clan! Isn’t it? Of late, cousins Taimur and Inaaya were spotted spending quite a deal of chill-time with each other. From meeting up for playdates to posing with their respective mommies for pictures, a single glance of these two munchkins in a single frame is overloaded with sugar! Recently, Taimur with his nanny, bua Soha Ali Khan and baby sister, Inaaya Naumi Kemmu were clicked by shutterbugs in the city. Do we need to say how cute they looked? Checkout the picture below:

As captured from their outing, a fan tried to come near Taimur and his nanny to click a selfie with Taimur. While all the photographers who stood there began warning the passerby, the nanny at once, hysterically shooed him away! Check out the video here:

When you are a celebrity, people will dream of getting themselves clicked, but understanding the time and situation is important. Recently, Kareena, Saif and Taimur were on a holiday to London. During one of the evening strolls, a fan tried to click Kareena and Taimur which largely angered Saif. A picture of angry Saif Ali Khan went viral in no time. Here’s the picture:

In a latest Filmfare interview, Kareena spoke about all the unwanted media attention that Taimur is receiving. She shared, “ I don’t like that at all, neither does Saif. As parents we are scared. I’d want my son to grow up as normally as possible. Saif’s even more particular about this. He wants Taimur to grow up, away from the eye of the paparazzi and the film scenario. Because Saif himself didn’t grow up in a film atmosphere, although his mother was an actress. His father (the late Mansoor Ali Khan Pataudi) as we know, belonged to the cricketing world. But in today’s time it’s tough. But I do wish he didn’t get photographed as much.”

In a throwback interview with HT, the doting mommy Kareena had shared, “Taimur is always chilled out. He is so gorgeous. The only thing he doesn’t like about me is that I kiss him about 20,000 times a day”. She further added, “And he (Taimur) keeps pushing me off. Saif says why are you doing this. But I always feel like hugging him.” No wonder! (Do Read: Unseen Picture Of 8-Months-Old Taimur Playing Game On A Tablet Is Every New Age Gadget Freak Kid)

Kareena also opened up about how she feels about all the hype and media attention that Taimur is exposed to since his very birth. The Veere Di Wedding star shared with Mid-Day, “Frankly, I am paranoid. So much attention on him is scary. The more I think of it, the more I want to put a kaala teeka on him. I don't want him to leave the house. But that's me going overboard. I control my feelings only so that my son can grow up like a regular kid. He deserves to have that chance sans any pressure."

Kareena, who wouldn’t be so protective with a son like that! How many of you adore Taimur Ali Khan? Let us know in the comments section below. Taimur Ali Khan is one such cutie who is everyone’s favourite. And next on the list is his cousin, Soha Ali Khan and Kunal Kemmu’s daughter, Inaaya Naumi Kemmu. One picture of theirs surfaces on the internet and people just can’t stop swooning over them. Now, from last few days,