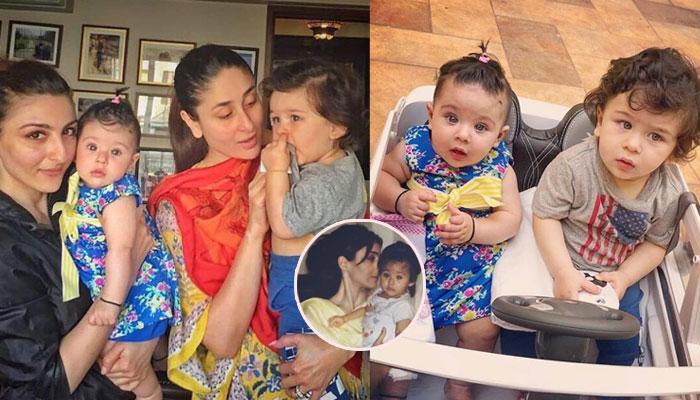 Taimur Ali Khan is one such cutie who is everyone’s favourite. And next on the list is his cousin, Soha Ali Khan and Kunal Kemmu’s daughter, Inaaya Naumi Kemmu. One picture of theirs surfaces on the internet and people just can’t stop swooning over them. Now, from last few days, it seems that Inaaya and Taimur can’t do without each other and are enjoying their play dates. Both the kids have eventually become a national obsession. (Also Check: Anushka Sharma Trolled For Being With Virat Kohli In The Team India Group Picture Shared By BCCI) 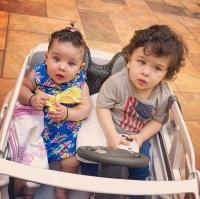 Yet again, yesterday on August 7, 2018, Soha Ali Khan was snapped outside Kareena Kapoor Khan and Saif Ali Khan’s Bandra house. And we are wondering if this was yet another lovely play date of Inaaya and Taimur. Soha could be seen wearing a white kurta, pink salwar and a contrasting dupatta. And the little cutie was looking even cuter in casuals wearing a white funky t-shirt and sky blue pyjama. See the pictures below: 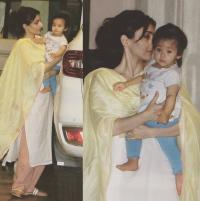 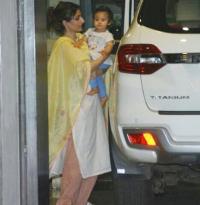 Whether it is chilling with the family or roaming in their toy car, Taimur and Inaaya are totally adorbs, and we can’t get enough of them. Both the babies have hardly any age gap and so Soha had a few clues in her mind for parenting Inaaya. In an interview, she said, “Taimur and Inaaya are both kids, just a few months apart from each other so it really helps to observe Taimur, follow his growth, the changes and milestones in his life and be more aware and prepared while raising Inaaya. Bhai and Kareena both help Kunal and I with handy tips from time to time which is a blessing when you are a new, first time parent.” (You May Also Like: 8 Plus Size Television Actresses Who Have Proved That Size Doesn't Matter, Talent Does) 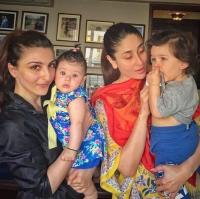 Talking about the fun times when the tiny tots are together, Soha quoted as saying, “Taimur is at an age where he wants to explore everything. He is now able to hold things, his grip is getting stronger. He is also into snatching things and throwing them away. Inaaya is too small now and so we are constantly scared to have them too close to each other. Especially Bhai (Saif) gets really worried whenever Taimur tries to get closer to where Inaaya is.” (Don't Miss: Anand S Ahuja Has A Special Note For Father-In-Law Anil Kapoor On Success Of His Film 'Fanney Khan') 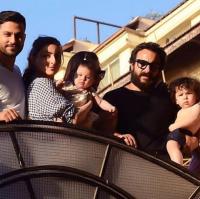 Further sharing about Inaaya and Taimur growing up together, Soha expressed, ”Bhai and I have an 8-year age difference. But Taimur and Inaaya will only have a year’s. I hope they grow fond of each other as they grow up, become best friends. Of course, Taimur is a little older so he will always be the elder brother to Inaaya, protective about her.” (Also Check: Sargun Reveals Ravi Is Very Unromantic, Once Gifted Her A TV And Washing Machine On Her Birthday)

We wish Taimur and Inaaya many more such play dates. And yes, all the fans surely want to see more of their pictures and some videos together!