Life’s been really hectic and chock-o-block for Kareena Kapoor Khan and Saif Ali Khan. It’s been months since the couple have been away from India, and are based out of London for work and family. 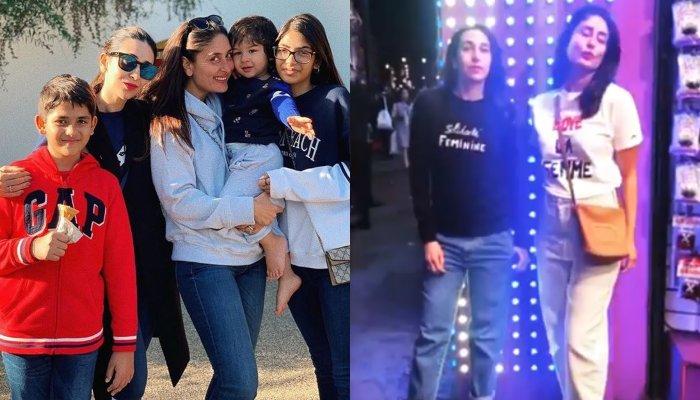 Months of hard work and no play make everyone dull and our favourite B-town celebrities have administered it on their brains like how! Plus to add onto it, when work feels like a vacation, we call it a dream job! That’s the beauty of this profession called acting. We have often seen many celeb families joining in their (and ours too) stars when they are on a work-cum-leisure trip and speaking of which, reminds us of one of the primitive families to have established the industry- the Kapoors! We are in awe of the luxury and extravaganza of the Kapoor holiday diaries and hence, as we near the end of this week, we bring to you the latest update of the Kapoors from tehir London vacay, which also includes our little sunshine, Taimur Ali Khan. (Do Read: Drashti Dhami Is Holidaying In Spain With Husband, Neeraj, Gives Us A Digital Tour Of Ibiza Island)

Life’s been really hectic and chock-o-block for Kareena Kapoor Khan and Saif Ali Khan. It’s been months since the couple have been away from India, and are based out of London for work and family. On June 2019, Karisma Kapoor, her kids, Samaira and Kiaan, sister, Kareena Kapoor Khan and baby Taimur Ali Khan were holidaying in Europe. Karisma, who is an active Instagrammer, had taken to the social media app and shared with all her fans, a sneak peek of her quite enviable European holiday. The picture had Karisma, Samaira, Kiaan, Karisma and Taimur, looking super-happy as they posed for the camera. Here's an image from the same:

While Karisma Kapoor had then returned to India, her sister, Kareena Kapoor Khan flew off to London to be with her hubby, Saif Ali Khan and Taimur Ali Khan. And what looks like it, her doting sister, Karisma Kapoor has once again joined Kareena on her London voyage, but this time, not just with her kids. Karisma took to Instagram and shared a family picture with sister, Kareena, kids, Samiara and Kiaan, mommy, Babita and not to forget, the super-adorable Taimur Ali Khan who looked away from the camera as he sat on a walker! Posting the picture, the Raja Hindustani actress captioned it with two hashtags that said it all “#famjam #londondiaries.”

Karisma Kapoor, a few minutes back, took to Instagram once again and posted a boomerang video of perfect #SisterGoals. The video had both the star siblings wearing the same dress as in the aforementioned picture, which suggests that it is from a similar outing. In the video, Karisma is seen looking towards the camera while her star sibling, Kareena gives out a glamorous pout! Sharing the video, Karisma captioned it as “And while she pouts I pose #sistersarethebest.” Here you go:

Individually or together, the Kapoor sisters always show us how to cull out time for oneself and family inspite of their busy schedules. For instance, during Karisma Kapoor and Kareena Kapoor Khan's mother, Babita's birthday in April 2019, the celeb sisters, along with their mother and babies had jetted off on a mini getaway to Nasik. (Must Read: Malaika Arora And Arjun Kapoor Show Off Their Style Game As They Step Out For A Romantic Lunch Date)

Karisma Kapoor and Kareena Kapoor Khan show us how to rule the world! From travelling together every now and then, and twinning when they head out for parties, there aren’t many whom we love like the ravishing Kapoor sisters! Talking about their professional lives now, Kareena made her debut in the telly screen as a judge on Dance India Dance. While we are all elated to see the power-packed performances, it is Kareena whom we all are eager to see every day. But the recent episode of the dance reality show had Karisma Kapoor filled in for her star sister, as Bebo is recently shooting in London for her upcoming film, Angrezi Medium. In the picture, Karisma had looked amazing in a pink beaded Zara Umrigar gown. Sharing her first look as a guest judge, she had written, “Filling in for my gorgeous sister as a guest judge on @danceindiadance.official #danceiconspecial #dancekajungistaan #zeetv.”

Karisma Kapoor and Kareena Kapoor Khan and their three munchkins (Samira, Kiaan and Taimur), comprising of the 'famous five' almost, always, keep on hanging out with each other. On Diwali 2018, Karisma Kapoor had shared a picture of ‘mama’s with their babies’ on her social media handle. She had captioned it as “Mama’s and their babies #aboutlastnight #onlylove #family #diwali #festivaloflights pic @khemster2”. In the picture, little Taimur Ali Khan can be seen perched in her maasi, Karisma’s arms, while Samiara and Kiaan pose standing beside their maasi, Kareena Kapoor Khan. (Also Read: Shah Rukh Khan's Quality Time With Kids, Suhana, Aryan And AbRam, Paparazzi Captures The Dine Out)

Guys, how did you feel upon spotting Taimur Ali Khan after a long time? Keep us posted!