On January 23, 2020, Aparshakti Khurana's wife, Aakriti Ahuja had turned a year older and to mark the same, her bhabhi, Tahira Kashyap penned down a beautiful note for her devrani.

If we talk about how the cinema has changed in the past decade, it would be hard to define without the mention of the Khurrana brothers, Ayushmann Khurrana and Aparshakti Khurana. While one has taken over the concept of mainstream films with his fearless choices and redefined ‘hero’ for everyone, the other has managed to steal the hearts of the audience by nailing his supporting actor roles with finesse. The Khurrana brothers are not just taking over the Bolly-world by nailing their every performance but are also each other’s biggest pillars of strength. (Also Read: Neha Kakkar Completes A Part Of Aditya Narayan's 'Heart' Amidst Their February 14 Marriage Rumours)

Not just on the professional front, the Khurrana brothers manage to grab the headlines for their personal life too. While Ayushmann Khurrana had embarked his ‘happily ever after’ journey with childhood sweetheart, Tahira Kashyap on November 1, 2008; on September 7, 2014, his brother, Aparshakti Khurana had decided on forever with his soulmate, Aakriti Ahuja. In an interview with the Hindustan Times in 2017, Ayushmann had spilt some beans on his traditional family and had said, “There are no devrani-jethani stories here. Our family is traditional. Hard to believe, but Aparshakti and Aakriti actually touch our feet.” To which, Aparshakti had added, “You can’t have conflicts when the relationship is like that. We can’t even complain because of that.” 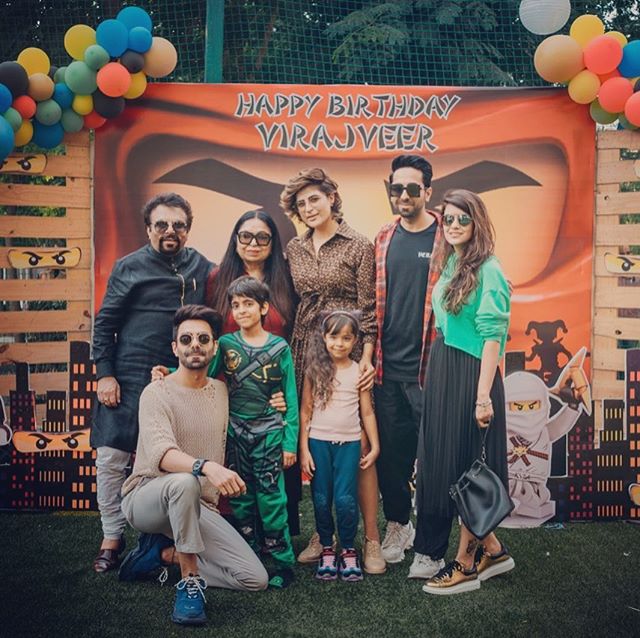 On January 23, 2020, Aparshakti Khurana’s wife, Aakriti Ahuja had turned a year older and to mark the same, the celebrations had taken place on the birthday eve and the wishes have been pouring in for her, even till now. Aakriti’s bhabhi, Tahira Kashyap Khurrana penned down a beautiful note for her devrani with the cake-cutting video from her birthday celebration. A while back, Tahira took to her Instagram story and wrote, “Happppy birthday @aakritiahuja For me, you are an embodiment of beauty and brains and wisdom beyond years! Lots and lots of love.” Aakriti reposted the story and wrote, “Always so sweet, thank you bhabhi” atop it. Here are the screenshots of the wishes that Aakriti received from her husband, Aparshakti, bhabhi, Tahira and bhaiya, Ayushmann Khurrana: 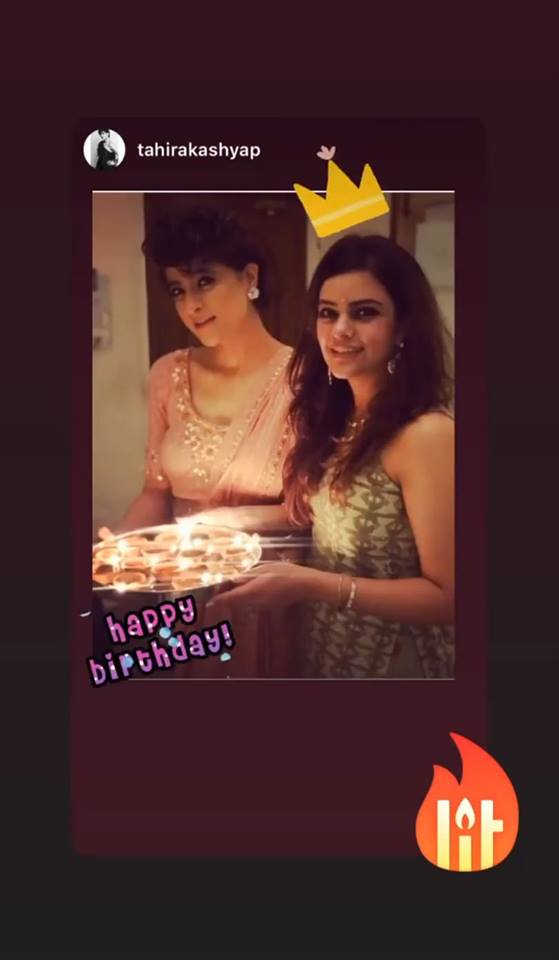 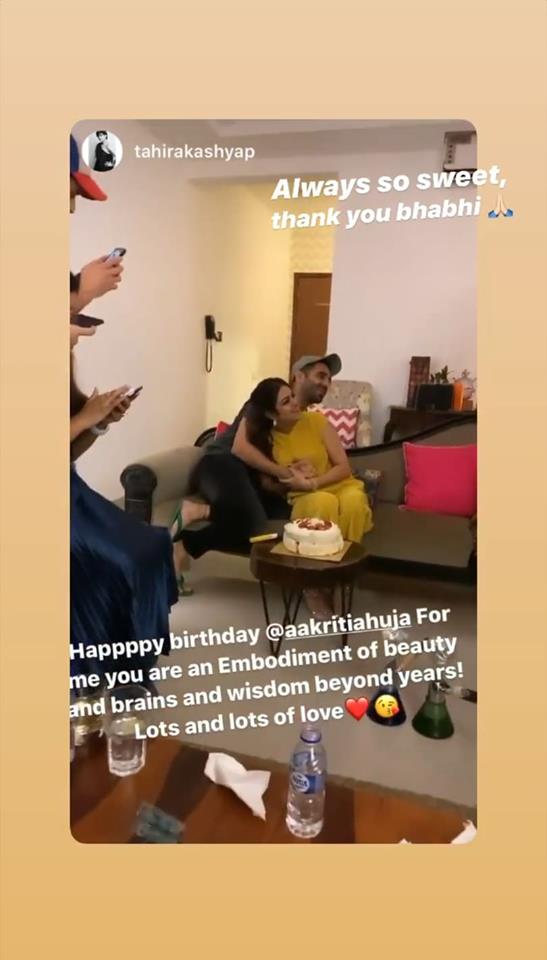 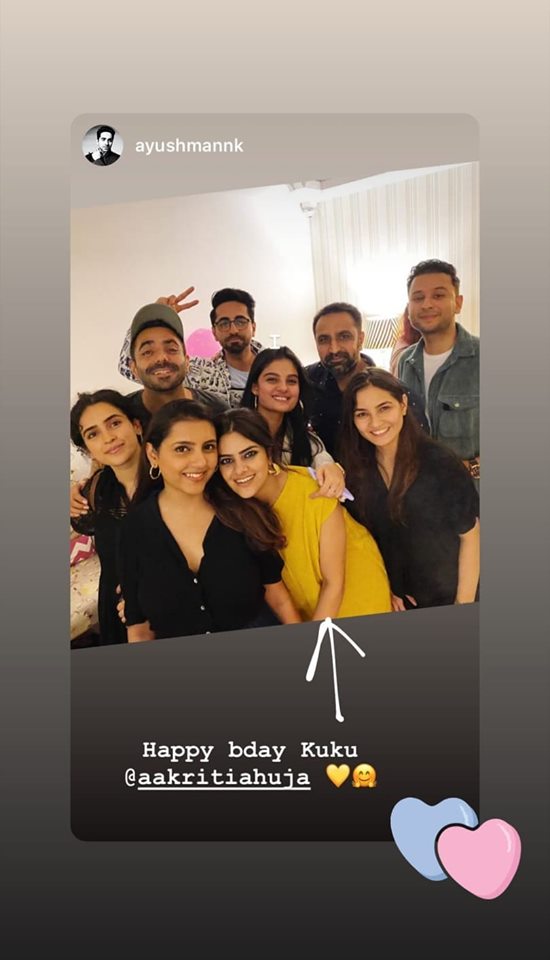 A few months back, Tahira Kashyap Khurrana’s doting devrani, Aakriti Ahuja had posted a super-adorable picture of her husband, Aparshakti Khurana and brother-in-law, Ayushmann Khurrana giving Tahira a sweet peck on her head. Aakriti had penned down a beautiful note, which could be read as “The happiest picture I’ve seen in a very long time. The girl here in the centre, she binds us all like. Our absolute support system and rock. My family, hearts, some Johny Bravo hair and a whole pool of love and togetherness. I miss you and you need to come here super soon!” (Also Read: Mahhi Vij Flaunts A Tattoo Dedicated To Her Husband, Jay Bhanushali With His Name Inked On Her Wrist) 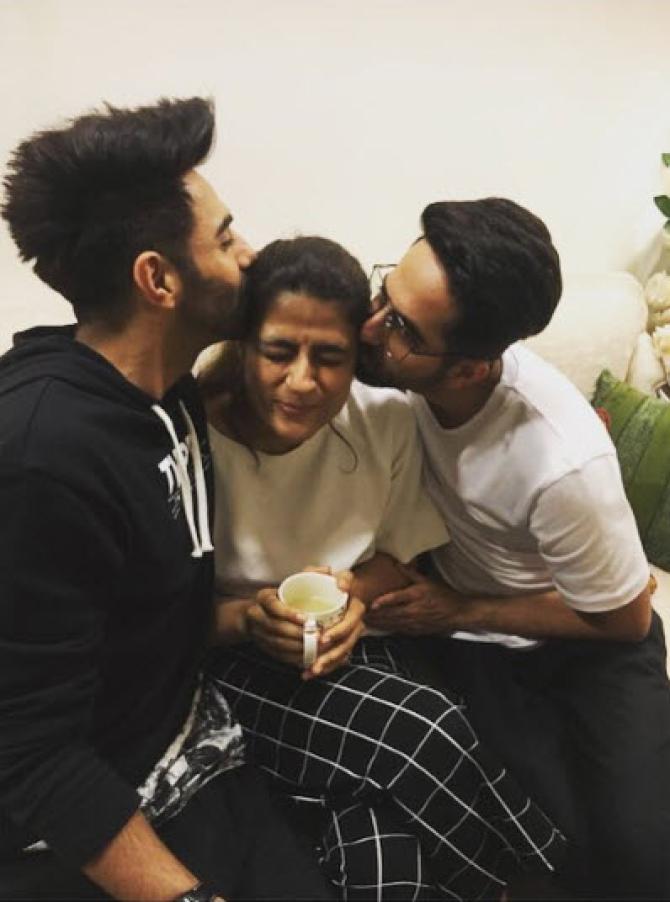 Just like his brother, Ayushmann Khurrana, Aparshakti Khurana is also a complete entertainment package as he too, is an actor, television host and radio jockey. And while we have heard of Ayushmann’s soothing voice many times, it was in 2017, when he had given their fans a glimpse of his younger brother, Aparshakti’s singing talent. Flaunting their soulful voices in a duet together and making the audience go berserk with their spirited performance and dancing their heart out, Ayushmann had shared a video of his power-packed performance with Aparshakti and had tweeted, “When you sibling goes berserk with you onstage. @Aparshakti #dubai #gig.”

When you sibling goes berserk with you onstage. @Aparshakti #dubai #gig pic.twitter.com/e7IHt42kXX

January seems to be a celebratory month for the Khurrana clan as on January 2, 2020, Ayushmann Khurrana and Tahira Kashyap Khurrana’s son, Virajveer Khurrana had turned 8-year-old. It was followed by Tahira’s birthday on January 21, 2020. 2 days later, Tahira’s sister-in-law and Aparshakti Khurana’s wife, Aakriti Ahuja celebrated her birthday on January 23, 2020. To celebrate Virajveer’s eighth birthday, the star parents had hosted a bash in Mumbai on January 12, 2020. Tahira had reposted the sneak peeks of the bash on her Insta stories and we had gotten a glimpse of her devrani-jethani bonding with ‘kuckooo’, Aakriti Ahuja as they grooved for a Boomerang. Here’s a screenshot of the same: 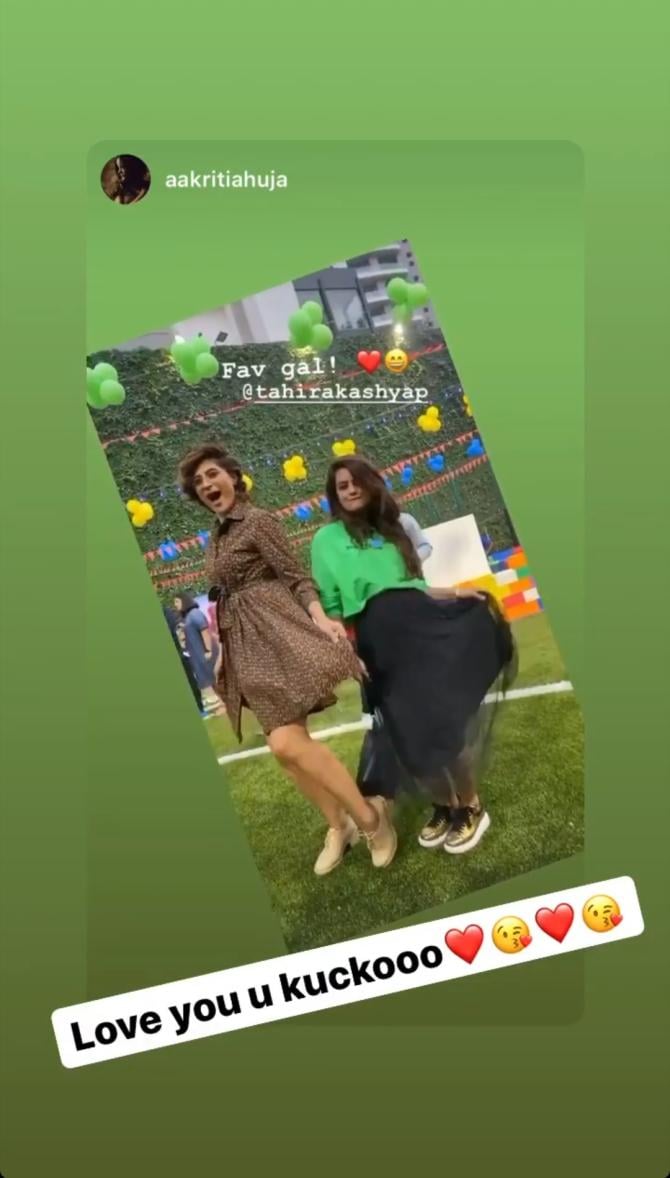 For Tahira Kashyap’s birthday, her devar, Aparshakti Khurana had posted a picture with his ‘prettiest girls’ from the celebration night. He had captioned it, “Prettiest Girls @aakritiahuja @tahirakashyap #HappyBdayBhabhi.” To this, Tahira had replied, “Love love love!! So blessed to have u both in my life.” When Aparshakti had wished his wife, Aakriti Ahuja on her birthday with a sizzling romantic picture, Tahira became one of the first ones to comment. She had complimented, "Ooooo what a lovely one!" followed by a fire emoji. (Also Read: Arjun Kapoor And Janhvi Kapoor Walk The Ramp Together For The First Time And Are A Sight To Behold) 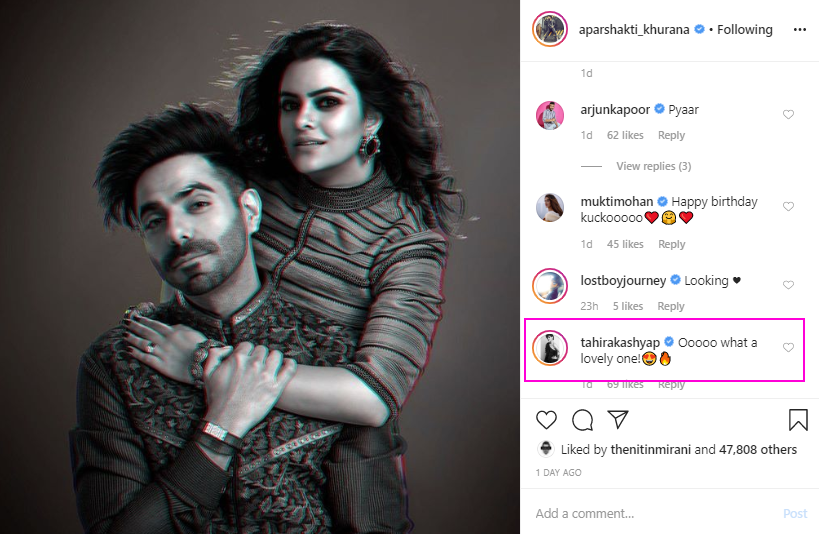 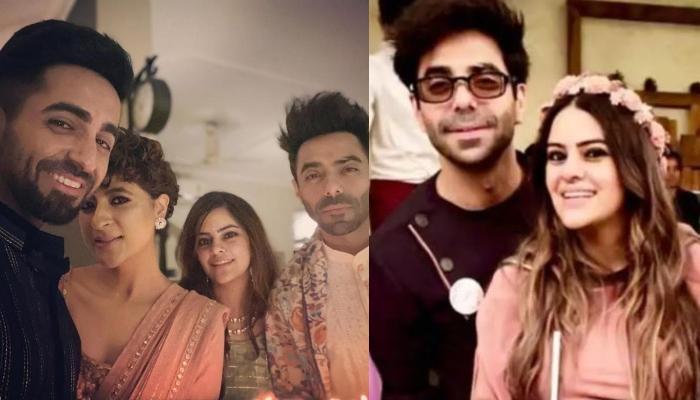 It is rightly said that happiness is the only thing that doubles when shared. Every good news is incomplete if not celebrated and shared with our loved ones. For the to-be parents of B-town, Aparshakti Khurana and Aakriti Ahuja, the celebrations of their pregnancy were incomplete without their family and friends.