Aparshakti Khurana and Aakriti Ahuja completed six years of their marital bliss and to mark the same, their sister-in-law and Ayushmann Khurrana's wife, Tahira Kashyap posted a lovely wish for them.

He might have made his debut in the industry as Ayushmann Khurrana’s brother, but over the years, he had managed to create his own niche and identity in the entertainment industry. Aparshakti Khurana is the man of the hour, who despite being the supporting character in the films, nailed his performances and left a mark in the audiences’ hearts. But did you know before making his debut in the Hindi film industry and made every girl’s heart swoon with his performances, Aparshakti had already lost his heart to his longtime ladylove, Aakriti Ahuja? (Also Read: Tahira Kashyap's Sister-In-Law, Aakriti Ahuja Praises Jethani For Her Writing Talent, Latter Replies)

For the uninitiated, let us give you a brief on who is Aakriti Ahuja! Aakriti is a budding entrepreneur and the founder of the company, La Feria Events. She is an MBA graduate from Indian School of Business (ISB), Hyderabad. Aparshakti and Aakriti had met each other in a dance class and since then, there has been no looking back for the couple. Stating how they had met, Aparshakti had once revealed to a media portal, “We met at the Shiamak Davar dance classes, and though I knew her from the past 7 years, we have been dating for just about a year.” 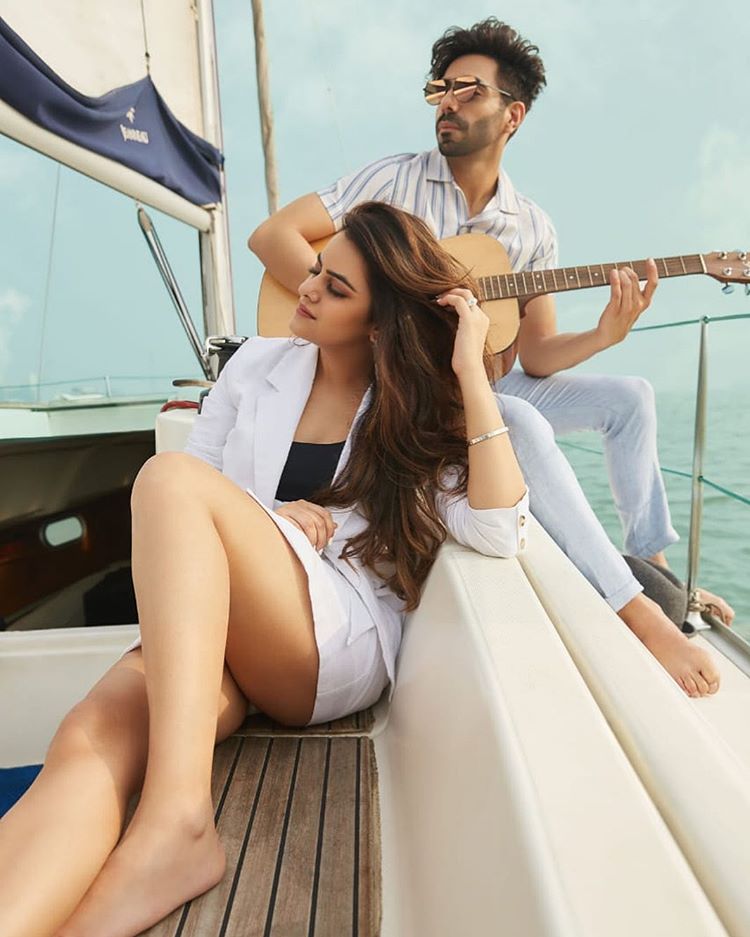 On September 7, 2020, Aparshakti Khurana and Aakriti Ahuja completed six years of their marital bliss and to mark the same, their sister-in-law and Ayushmann Khurrana’s wife, Tahira Kashyap posted a lovely wish for the couple on her IG story. Tahira posted a twinning-in-white picture of the couple, and wrote, “Jitne hot utne hi amazing couple!!! @aakritiahuja @aparshakti_khurana happy anniversary! Like I have always said you guys are couple goals!” followed by a heart emoticon atop it. Aakriti reposted the story on her Instagram and replied, “Haha! Thank you soo much bhabhi!” On September 6, 2020, Aparshakti had posted a dreamy picture with his wife, Aakriti and had written, “6 years Back. Same Date. Same Time @aakritiahuja.” 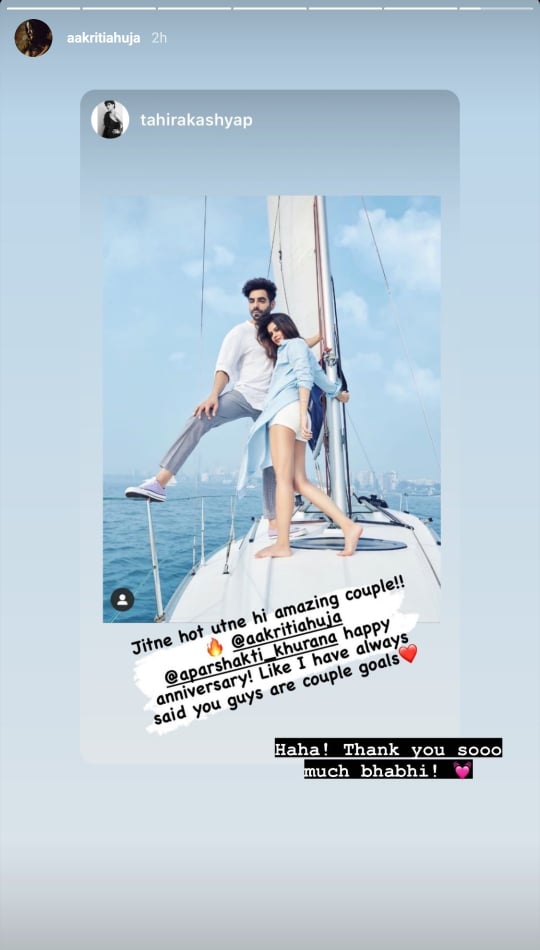 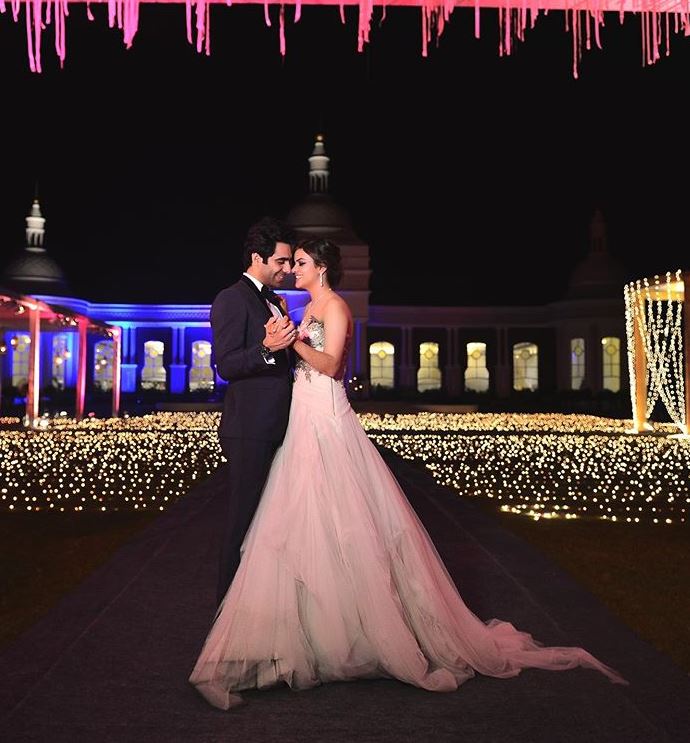 To mark their fourth and fifth anniversary, Aparshakti Khurana had posted the same picture with his wife, Aakriti Ahuja from their wedding rituals. On his fourth wedding anniversary, Aparshakti had captioned the post as “Thank you so much Kuckoo for saying YES to MY IDEA of getting married. Never felt sooo loved and special. Thank you so much for giving me amazing memories. Let’s make more such memories in years to come #Kuckoo #YouBringOutTheBestInMe #HappyFourYearsToUs @aakritiahuja @vineetmodi @studio63in” and next year, on September 7, 2019, Aparshakti had written, "5 years to this beautiful moment with the most beautiful @aakritiahuja #HappyAnniversary." (Also Read: Mira Rajput Kapoor's Sister, Priya And Brother-In-Law, Vidhit Shower Her With Love On 26th Birthday) Aparshakti Khurana’s brother, Ayushmann Khurrana and his sister-in-law, Tahira Kashyap had performed the bhaiya-bhabhi duties on his wedding and were involved in all the preparations. Speaking about the wedding, Aparshakti had stated to a media portal, “Yes, I am married. It happened on 7th September in Chandigarh and I am feeling so awesome and blessed. Life could not have had better in store for me. Aakriti is adorable and my entire family loves her. Ayush bhaiya and Tahira Bhabhi performed on the title track of Luv Shuv Tey Chicken Khurana. Papa and mumma danced to Aaj Kal Tere Mere Pyaar Ke and my friends danced to Veere Di Wedding (The Entertainment). It was a wedding staright out of a Yash Chopra film.” 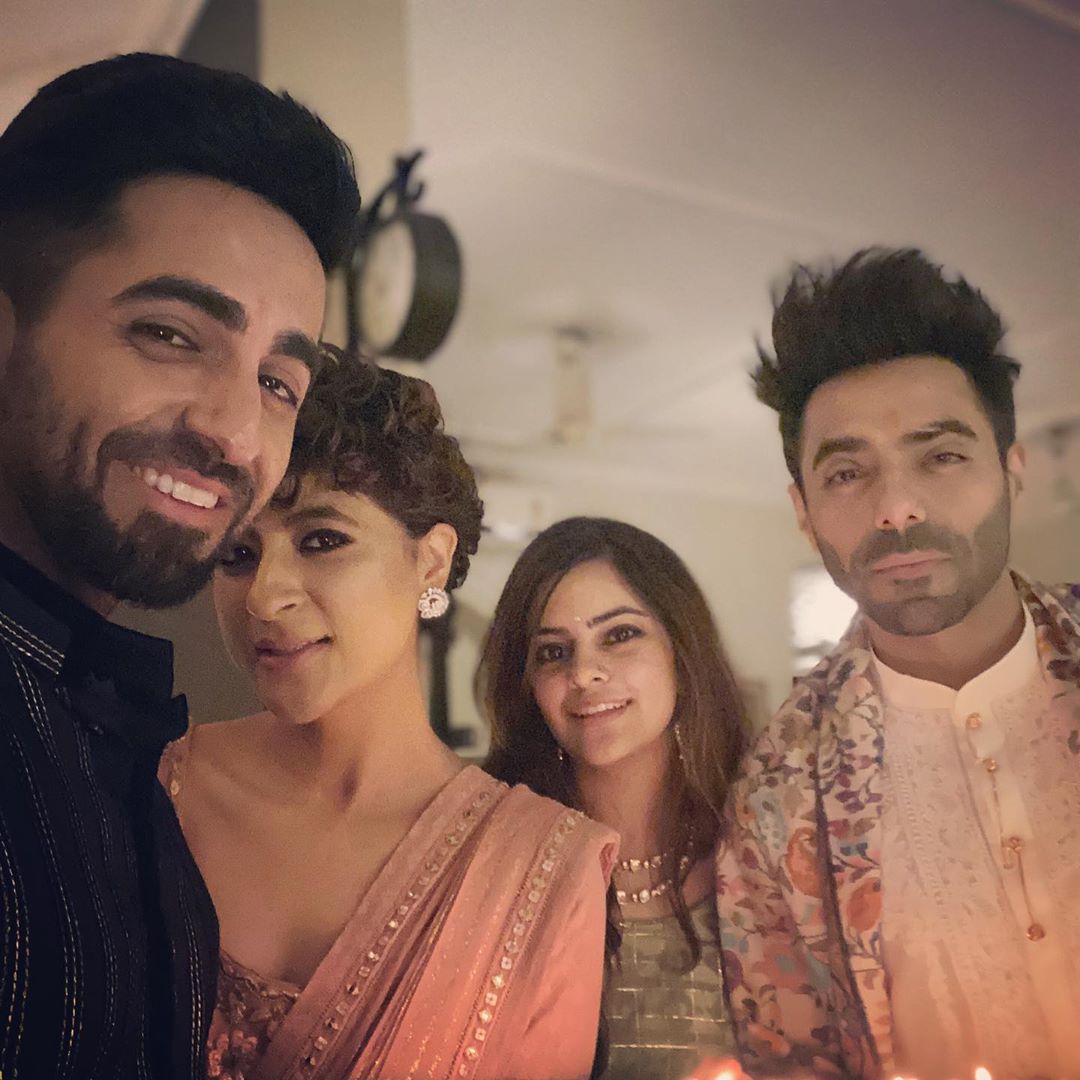 On January 23, 2020, Aakriti Ahuja had turned a year older and to mark the same, the celebrations had taken place on the birthday eve. Aakriti’s bhabhi, Tahira Kashyap had penned a beautiful note for her devrani with the cake-cutting video from her birthday celebration. Tahira had taken to her Instagram story and had written, “Happppy birthday @aakritiahuja For me, you are an embodiment of beauty and brains and wisdom beyond years! Lots and lots of love.” Aakriti had reposted the story and had written, “Always so sweet, thank you bhabhi” atop it. (Also Read: Aparshakti Khurana Spends Quality Time With His Wife Aakriti And Nephew Virajveer On Family Vacation)