'Pal Pal Dil Ke Paas' actor, Karan Deol became a victim of bullying in school for being Sunny Deol's son. In an interview, Sunny Deol opened about his reaction on the incident. 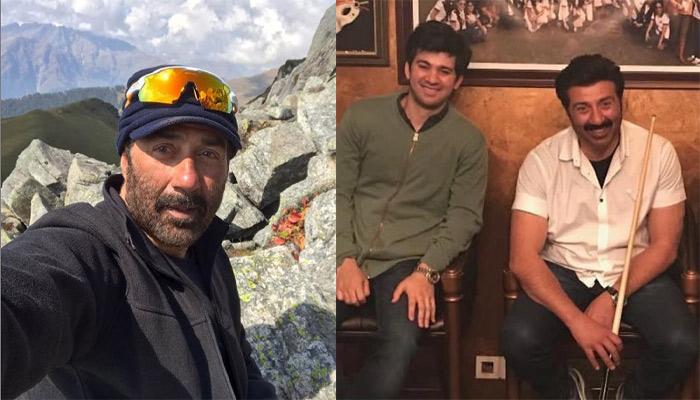 Karan Deol made his debut with the movie, Pal Pal Dil Ke Paas alongside Sahher Bambba. The movie is produced by none other than Bollywood actor and Karan’s father, Sunny Deol. Before the release of the movie, Karan in an exclusive interview with Humans Of Bombay had shared his experience with bullying in school for being Sunny Deol’s son. Recently, Sunny Doel reacted to the incident. (Recommended Read: Priyanka Chopra Reveals That Her Most Treasured Possessions Is A 'Mangalsutra' And We Agree With Her)

In an exclusive interview with Pinkvilla, Sunny Deol reacted to his son, Karan Deol’s bullying experience in school for being his son. He was quoted as saying, “I did not get to know too much about it (bullying) because the filter point has always been the mom. We have all been like that, mother has been the cushioning factor, always. That's the same with Rocky (Karan) as well. Obviously, he has gone through it. I think any guy or girl who is the son or daughter of a famous person goes through it. I had gone through it."

Sunny Deol further shares that he himself was a victim of bullying in school for being the son of the legendary actor, Dharmendra ji. He revealed, “I had changed nearly 4-5 schools myself because of all these issues but then one has to accept that this is a fact and that you cannot run away from it. People are going to treat you like that, either they will be nice or horrible to you. That is why when I was to start my career, I went abroad where nobody knows me and I could find my footing and understand what I want to do and how I want to do. I think Karan also went through the same. It is good that he spoke because people usually think everything is good because we don't talk about it too much. The grass is always greener on the other side."

Karan Deol also added to the experience of bullying in school and outside and said, “I think it is to any kid who is quiet and daydreamer, people don't speak to you and form judgements. Don't judge a book by its cover because that kid might be having his own problem and life, and he might be having his own talent but is perhaps afraid to showcase it."

Karan Deol had fought against all the odds and shared his fight back story during the interview. He recounted, “It was at a coffee house when I rapped Mocking Bird. The first time, in my life, I performed on stage when I was in 9th or 10th and I was nervous. I spoke to my dada about it, mom saw it, dad saw it later and it was one of the proud moments for me as I beat my stage fright. That point people make you feel that you are not good enough but who are they to make you feel that way?" (Suggested Read: Mona Singh Of 'Jassi Jaissi Koi Nahin' Fame Is Secretly In Love With A South Indian Guy?)

For the unversed, Karan Deol had faced bullying in school for being the son of Bollywood superstar, Sunny Deol. In an interview with the Humans of Bombay, he had shared the experience. Karan had shared, “The first memory I have of school, was when I was in 1st grade. We had a sports competition and I was taking part in a race. I was standing there when suddenly a few older boys surrounded me. One of them lifted me up, and in front of everyone, smacked me down. He then asked me, ‘Are you sure you’re Sunny Deol’s son? You can’t even fight back’. I was so embarrassed.”

Sharing his experience further, Karan Deol had added, “It didn’t get any easier from there. Most kids would either judge me or make fun of me, and even the teachers were the same. Once when I didn’t do well in an assignment, in the middle of the class, a teacher came up to me and said, ‘You’re only capable of writing your dad’s cheques, and nothing else.’ My mom was my only support through all of this, she kept telling me, ‘they're saying these things because that’s how they are as people, it says nothing about you.’ And that kept me going. It was tough but I had to stand up for myself and answer back instead of giving up and backing down. I had to understand that no one else, but I had the right to decide my worth."

Karan Deol had further talked about his turning point in life and had shared, “I think my turning point was when my school was hosting a talent competition, and I decided to take part. I realised that this was a chance to prove myself. I spent night after night, preparing a rap -- because that’s the only thing I knew I was good at. On the day, I remember walking up on that stage, and there was a sea of people, with all eyes on me. But I took a deep breath and performed my heart out. All the years of being bullied, of being ridiculed, of being identified as nothing else but ‘Sunny Deol’s son’, came out when I was up on that stage. The audience was cheering me on too -- I felt so liberated; like I’d finally broken free from the shackles.”

Karan Deol had concluded, “It took time, but that moment changed my life. I realised that sometimes, it doesn’t take people, and situations, to make your life better. It takes a strong belief in yourself, the power to see yourself for who you are, and not the way others want you to be. You’re not made to fit into moulds, you’re made to create your own identity -- one that’s unlike anybody else’s.” Isn’t that beautiful? (Must Read: Anil Kapoor Cannot Stop Praising His Wife, Sunita As He Calls Her The Best Host In The Entire B-town)

Karan Deol is such a fighter. What do you guys think? Valentine's Day is here and undeniably, we, as Indians, have been shaped by our larger-than-life love stories of Bollywood. With the whole world immersed in love today, on February 14, 2019, another Bollywood love story is all set to sweep us away in the romance. (Suggested Read: Boney Kapoor, Brother