In a world that believes more on logic and less on traditions, Bollywood actress, Priyanka Chopra Jonas is restoring our faith in marriages. Scroll down as she talks about her 'mangalsutra'! We live in a world that has fallen prey to trends and in-style fashion. The marriages in India are no longer a sacred affair and the rituals have become another set of ceremonies that we can flaunt on our social media. We want to celebrate and create a trend out of the most special day of our life. The mangalsutra, sindoor and chooda which is a representation of a married woman is considered another burden in the name of modernism. We are part of a world that believes more in trends and less in traditions, but Bollywood actress, Priyanka Chopra Jonas knows the value of it. (Recommend Read: 'Uri: The Surgical Strike' Star, Vicky Kaushal Spills Beans On His Relationship Status)

Priyanka Chopra Jonas and Nick Jonas had tied the knot in lavish ceremonies at Jodhpur’s Umaid Bhawan Palace on December 01-02, 2018. Her wedding was a dreamy affair, a blend of Nick's side of Christian rituals and her side of Indian traditions. While most celebrities opt for a destination wedding, Priyanka took the vows in her own country, proving that she values her Indian traditions. 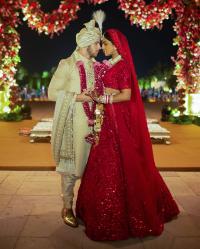 Recently, Priyanka's name was amongst Vanity Fair's 2019 Best-Dressed List. And during the interview with the magazine, she talked about her most prized possessions, and shared, "My mangalsutra. In an Indian wedding, it’s a necklace the groom ties around the bride’s neck. And a diamond ring my dad gave me." (Also Read: Neha Kakkar Shares A Cryptic Post About Not Stressing Over Someone And How Life Should Move On) 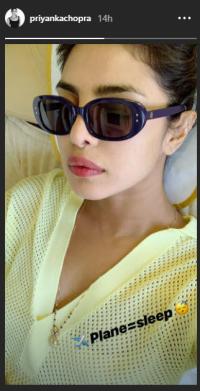 For those who don't know, a mangalsutra is a sacred thread that is tied by the groom on the neck of his bride after the pheras. It is worn as a symbol of marriage and a promise from a husband to his wife of protecting her from all evil. Nowadays, it has become more of a fashion statement.

Coming back to Priyanka's mangalsutra, she wore one of the most exquisite designs of all times. It is a sleek one with four uncut diamonds forming a pendant. The centerpiece of it is a huge pear-shaped diamond with a few beads at the beginning and rest made up of gold chain. Take a look at it below: 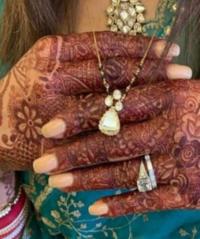 Talking about Priyanka and Nick's magical love story, in an interview with Jimmy Fallon, Priyanka had revealed how she wanted to take up Nick Jonas name. She had said, “I always wanted to add his name to mine because I feel, like, you know, we’re becoming a family and I’m a little traditional and old school like that. But it didn’t take away my identity. He gets added to who I am.”

In the same chat show, Priyanka had also shared that she wanted to get married on an island, “I wanted to get married on some private Island away from everything and we were like really stressed out about it. We thought Seychelles, Maldives, Mauritius or whatever. And nothing was working out”. She had further added, “The conversation took place when they were in Mumbai, and Nick said, ‘Why aren’t we doing this in India? Shouldn’t I be taking my bride from her home?’” (Don't Miss: Riteish Deshmukh Asks For 'Chumma' From Genelia In San Francisco, Her Reaction Is Epic [VIDEO])

Well, we love the fact that Priyanka still values her traditions more! Nick Jonas and Priyanka Chopra finally made their first appearance as husband and wife on December 3, 2018, at the Jodhpur airport. After the Mr and Mrs shared their sangeet and mehendi pictures on their social media profiles, Nickyanka fans were delighted with their first post-wedding look captured by the