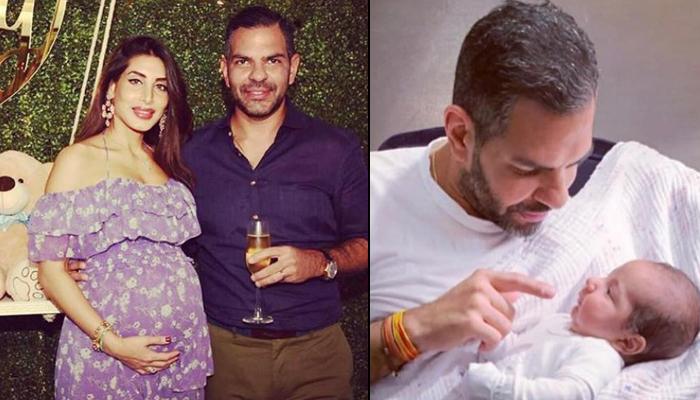 Welcoming a new life into this world, and the happiness that those beautiful 9 months bring in for the to-be parents is something that nothing else in life can match upto. Karisma Kapoor’s ex-husband, Sunjay Kapur and his second wife, Priya Sachdev Kapur are experiencing the same joy with the arrival of their little munchkin. After his divorce with Karisma, Sunjay tied the knot with model-turned-entrepreneur, Priya Sachdev in April 2017. And a year later, Priya and Sunjay welcomed a baby boy in their lives. (Also Read: Sania Mirza Shares Picture With Her Valentine Forever Izhaan, His Expressions Are Not To Be Missed)

Soon after the news came out that Sunjay Kapur and Priya Sachdev Kapur were blessed with a baby boy, fans couldn’t wait to get a glimpse of the little one. The newbie parents named their son, Azarius Kapoor. On February 14, 2019, Priya shared a post wishing the loves of her life on Valentine’s Day. Sharing pictures of her newborn son cuddled in daddy’s arms, a photo of her daughter from her first marriage, Priya captioned the pictures as, “Happy Valentines Day to Loves of my Life...love you all unconditionally #youaremyworld #myvalentines”.

Priya Sachdev Kapur’s sister, Charu Sachdev recently shared some pictures from to-be mommy’s baby shower ceremony. Seems like the doting sister and elated maasi-to-be, Charu organised the baby shower for her darling sister and sharing pictures from the same, Charu had written, “#babyshower for Sis 13.10.2018”. Priya looked stunning in a black floral dress, flaunting her baby bump and pregnancy glow like a pro.

Before Sunjay, Priya was married to a hotelier, Vikram Chatwal. But things didn’t work out between the duo and they parted ways in 2011. Priya and Vikram have a daughter named Safira Chatwal. On the other hand, Sunjay was earlier married to Karisma and the couple is blessed with two children, Samiera Kapoor and Kiaan Raj Kapoor. (Also Read: Unseen Pics Of Taimur Ali Khan From Karan Johar's Twins Yash And Roohi Johar's Second Birthday Bash)

Even on Samiera and Kiaan’s birthday, Priya posted birthday wishes for them on her Instagram handle. Sharing the birthday pictures of Samiera and Sunjay from Samiera’s birthday celebrations, Priya captioned it, “Happy Birthday Samiera. Wishing you a very Happy 13th Birthday Princess. You are officially a teenager now...! Love you.” Sharing a picture on Kiaan’s birthday, she wrote, “Happy Birthday Kiaan you are 8 years old today. You are the star in all our lives. Shine Bright!”

Priya and Sunjay completed their one year of marital bliss on April 13, 2018, and sharing a photograph from their wedding reception, Priya wrote, “Happy Anniversary my Darling Husband...Love you from the Sun and Back Infinite Times! You Complete Me in every way possible...Thank you for your unconditional love. This last one year has been beautiful and always a roller coaster with you...looking forward to a lifetime of more beautiful years of married life with you my Handsome Husband!”

Priya and Sunjay met each other for the first time in a flight and dated each other for 5 years before exchanging wedding vows. Priya was quoted as saying, “During the flight, we realised that neither of us was what our public perception had been made out to be. The barrier of those misconceptions came down and we kept in touch.” Further talking about how good Sunjay is as a father, Priya revealed, “Sunjay is an amazing human being and a very good father to his children. He loves them dearly. Both of us have never tried to instill any negativity in our children towards our ex-spouses.” (Also Read: Rohit Sharma Posts A Picture With His Baby Girl Samaira Wearing A Cute 'I Heart Daddy' Onesie) The world becomes a better place when people can co-exist despite a troublesome past experience. Bollywood has taught us to have cordial relationship with exes, especially when the kids are involved. We have seen many such couples, who normalise everything even after their divorce so that their kids don’t have