We've come to make your day by showing you a beautiful unseen picture of baby Janhvi Kapoor in her mother, Sridevi's arms, posing alongside Boney Kapoor!

Love doesn't see right and wrong and this aptly sums up late legendary actress, Sridevi Kapoor's love story with already married, Boney Kapoor. In the '90s their relationship was the talk of the town. It was in the year 1996 when the two had decided to start their own family as Sridevi was pregnant with her first child, Janhvi Kapoor. Scroll down to see an age-old, unseen picture of Sridevi with little Janhvi in her arms and Boney Kapoor. (Recommended Read: Sunny Deol's Extra-Marital Affair With Married Dimple Kapadia Still Not Over, After Almost 30 Years)

It's been more than 2 years now since we had a gem of the Indian cinema in an unfortunate incident. We can still feel that void that Sridevi had left behind in Bollywood. The Kapoor family is still trying to cope up with the huge loss and whether we talk about Boney Kapoor or two daughters, Janhvi And Khushi Kapoor, all of them recall the memories of their beloved Sridevi ji often on their social media handles! While scrolling on social media, we came across an age-old picture of Sridevi holding a little Janvi Kapoor in her hands with Boney Kapoor, and it is pure gold! In the rare old childhood photo, the little baby girl, Janhvi can be seen cuddled up in her mom’s arms. In the photo, Janhvi can be seen clad in a blue denim frock with matching shoes while Sridevi is seen holding her lovingly in her arms posing with her husband, Boney Kapoor. The picture speaks volumes of the love and affection between the mother-daughter duo. Check out the picture below: 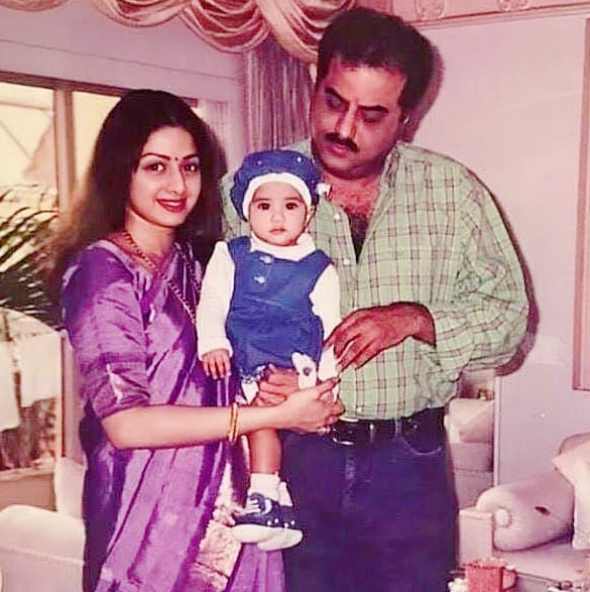 Once in an interview with the Filmfare, Janhvi Kapoor had talked about her late mother and legendary actress, Sridevi’s iconic dance numbers which she would like to recreate on the big screen if given chance. The young actress had expressed “I don’t know, all her songs from Chandni and Kaate Nahi Kat Te from Mr India. It wasn’t a dance number, but she was so expressive with her body, there was no dance movement as such, but she still caught the beat and the rhythm and those latkas and jhatkas were all so perfect. Hawa Hawai was such a fun song. The part where she’s having a ball of a time with the fruits and topi was done improvisation.” Further in the same interview, Janhvi Kapoor had talked about her mother’s views about dancing and how she used to tell her that the real meaning of dancing is to enjoy it thoroughly. She had said, “Mom always thought that in dance it’s not all about the steps, they are the last thing that you need to be thinking about. The most important thing, that she said one must do while dancing is to enjoy it thoroughly and have fun.” The Dhadak actress also revealed an incident talking about the way her mother used to rehearse for her performances on the events. Janhvi said, “I fondly remember one particular award function as a kid where I saw mom rehearse after a long time. I still remember that she was just marking the steps in the hall at home instead of rehearsing. When I saw her on stage, I was surprised to see her performing so beautifully. This was nothing that I saw at home. She’d blown everyone away with that performance. (Also Read: Kareena Kapoor Had Admitted Being Jealous When Saif Ali Khan Talks To A Pretty Girl, Video Inside) Boney had once said in a media interaction that it was Sridevi's innocence that had touched him. He had stated, “She's an introvert and doesn't communicate very easily with strangers and I was one at that point in time. But the few words she spoke, in broken Hindi and English, they touched me they moved me and I was curious to know her more. Gradually, she saw the man is too persistent and perhaps realized I was sincere and not looking for, what do I say, a fling. Little things made an impact on her and here I am as her husband today.” (You May Also Like: When Sanjay Dutt Revealed How His Once GF Tina Munim Had Taken His Mother, Nargis' Place In His Life) Well, for all we can say, Sridevi ji is dearly missed!