Sonam K Ahuja has returned from Doha after attending a jewellery event there and her hubby, Anand Ahuja welcomed her at the airport in the dreamiest way possible. Take a look!

In an era of breakups and patch-ups, certain couples make us believe that the concept of true love and steady relationships still exists. One such celebrity couple, who reminds us of the good golden days of true love, is Sonam Kapoor and Anand Ahuja, who are giving us couple goals since the couple had tied the knot on May 8, 2018. Ever, since Sonam Kapoor Ahuja and Anand Ahuja have gotten married, they are giving some serious relationship goals. (Recommended Read: Sana Khaan Reveals The Reason Behind Insulting Her Ex-Boyfriend, Melvin Louis On Social Media)

A complete fashionista, Sonam had married a businessman, Anand, who is the complete opposite of her and still never fails to make us blush with their social media PDAs and mushy captions. The duo was in a long-distance relationship earlier and now in a long-distance marriage but still manage to take out time for each other and make each moment memorable for one another. Recently, the actress has returned from Qatar after attending a jewellery event in Doha and her hubby, Anand Ahuja has surprised her at the airport.

On February 27, 2020, Sonam K Ahuja has returned from Doha, Qatar after attending a jewellery exhibition. In recent days, we have seen Sonam K Ahuja’s stunning and beautiful pictures on her Instagram handle. However, the best thing about her trip turned out to be her return to India. As her husband, Anand Ahuja has surprised her with a bouquet in his hands. The video of Anand Ahuja having a bouquet in his hands is going viral on the internet and a lot of its credit goes to his shyness. Take a look. (Don't Miss: Shweta Tiwari Twinning With Daughter, Palak Tiwari In Pastel Hues Gives Major Mother-Daughter Goals)

Aren’t this simply hubby goals from Anand Ahuja? Well, the businessman has always praised his wifey, Sonam K Ahuja for her bold decisions and career choices and never leaves a chance to compliment her. As per a report by Pinkvilla, in an interview, Anand had revealed that one thing for which he teases his wife, Sonam. When Anand was asked about Sonam’s fashion and style statement and was asked to name one fashion fad that he doesn't understand, Anand went on to reveal how his wife is versatile with her clothes and footwear and her fashion choices are something that they both have always admired. However, he did go on to say how there is this one thing he teases her about and that is her posting all these photos of the gifts she gets, and he is left wondering how can someone do that, and it leaves him confused. 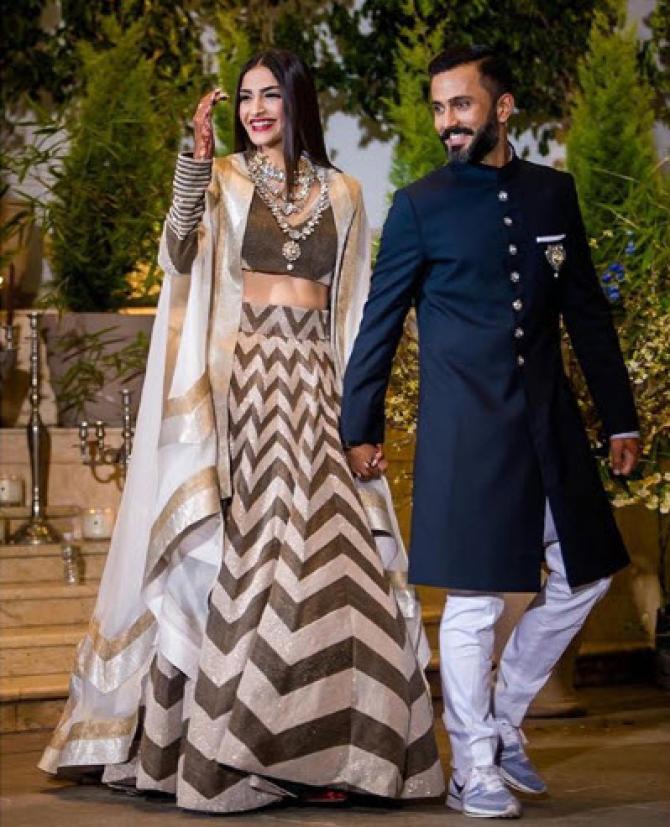 Sonam K Ahuja was last seen in the movie, The Zoya Factor and during one of the promotional events, she had revealed who her lucky mascot is? A PTI report had quoted Sonam sharing the details. She had shared, “My husband is my lucky mascot.” On September 19, 2019, Anand Ahuja also shared whom he considers his lucky mascot. He had taken to his Instagram handle and had recreated their wedding day pose. Anand had captioned the images as “girlfriend, best friend, wife, life partner, #LUCKYCHARM. (Five in one). #ZoyaFactor #EverydayPhenomenal.” Sonam had adorably replied to the post and had written, “I love you so so much my darling nothing compares to you", followed by a heart emoji. 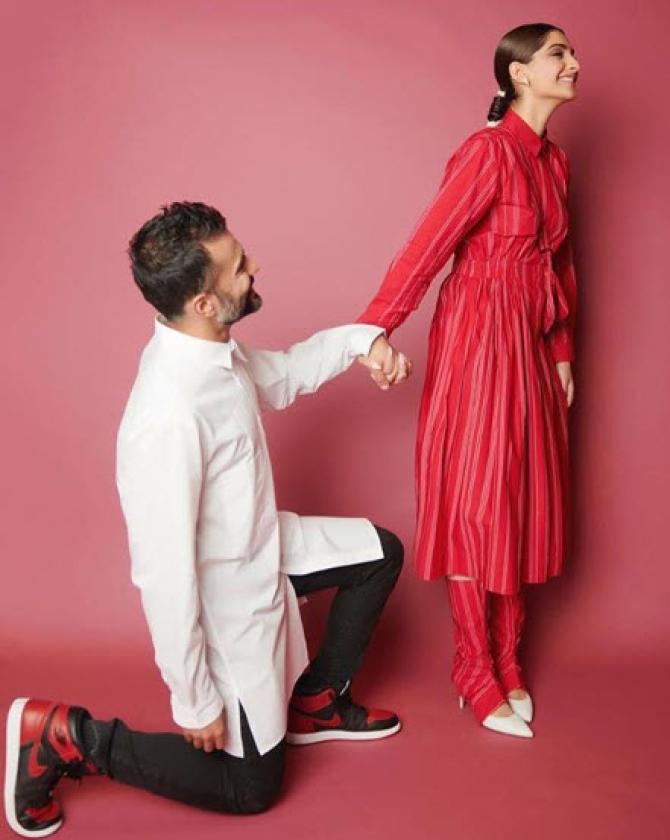 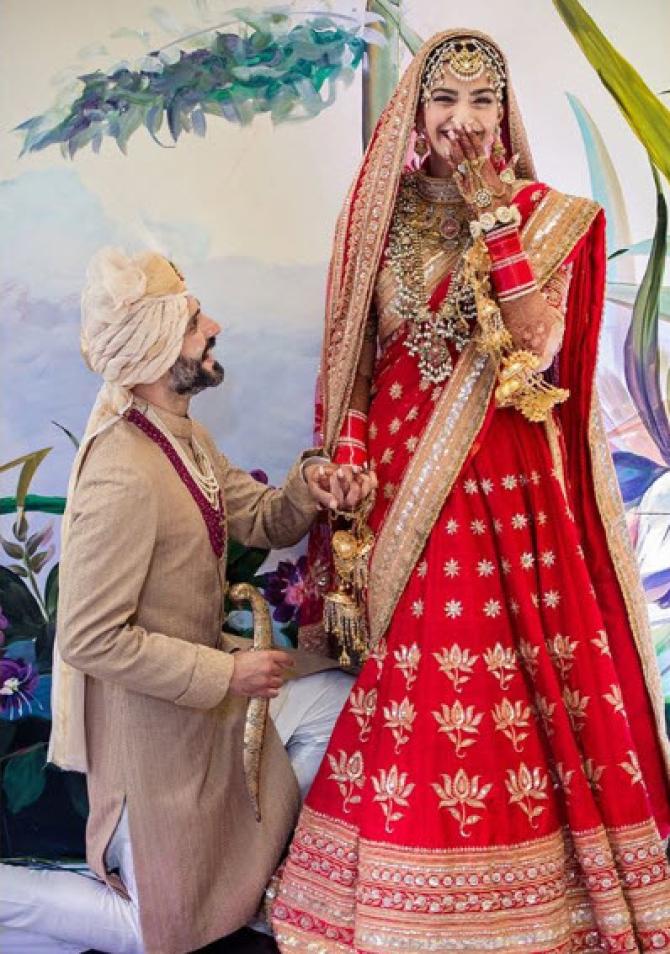 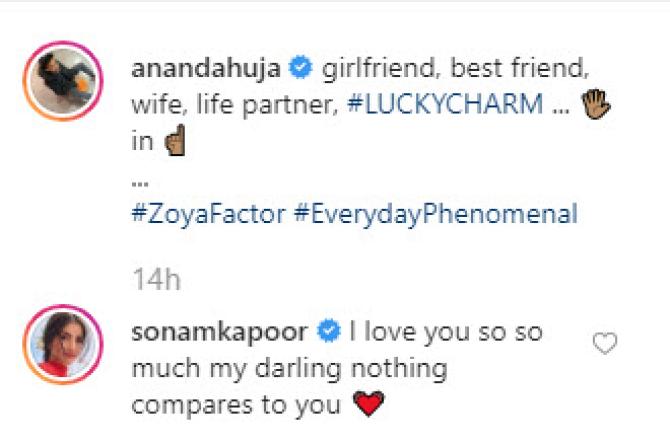 In an interview with Filmfare, Anand Ahuja had once shared how he and Sonam K Ahuja manage a long-distance marriage. He was quoted as saying, “When it comes to marriage, small things matter a lot. We eat meals together, even if we are in different time zones, on Skype. We also actively make sure that we don’t go over two weeks without seeing each other.” Not just marriage, their dating spree too, had begun long distance. Speaking about the same, the dapper entrepreneur had shared, “We would talk over the phone. It was seven weeks before we met. By then, we knew we were in love but (we) met in person to solidify it. At the end of the day, it's about being patient.” (Also Read: Konkona Sen and Ranvir Shorey Officially Files For Divorce After Living Separately For Last 5 Years) 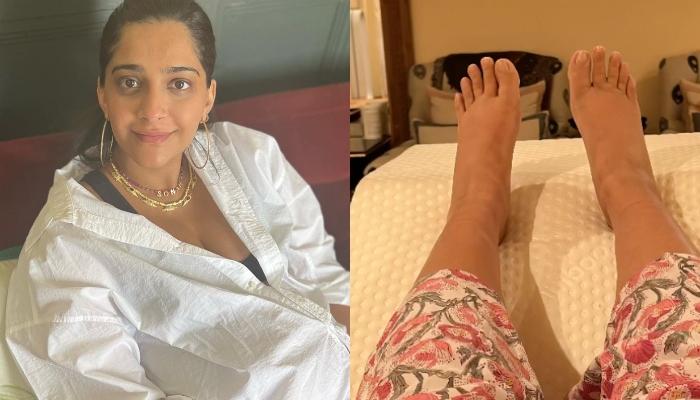 Bollywood actress, Sonam Kapoor Ahuja is winning hearts with her pregnancy diaries. From sharing her no makeup look to flaunting her fully-grown baby bump, Sonam has left the entire nation in awe. Likewise, the mommy-to-be is leaving us all in awe with her pregnancy fashion. And we are keeping an eye on