And she is finally Mrs Sonam Kapoor Ahuja! After heap-loads of planning, hard-work and shaadi ki taiyyari, Sonam Kapoor got married to long-time beau Anand Ahuja today (Save the date: May 8, 2018). Adorable pictures and videos of the couple, getting all candid and mushy (at times) surfaced on the internet like a storm.

We are sure that you remember the adorable and fun-modeled cake topping that Sonam and Anand cut right after their wedding. As per recent pictures, Sonam and Anand cut a giant 6-decker cake on their reception party. Woah! Check out the video below: (Also Read: Sonam Kapoor-Anand Ahuja's Post-Wedding Cake Is Unique And Tells A Cute Story About The Couple)

Sonam Kapoor-Anand Ahuja's Star-Studded Reception Was High On Style, See Who Wore What At The Party

In yet another video, see how the adorable couple fed the cake to each other and their family members. Don’t miss Anand’s expression when he feeds the cake to father-in-law, Anil Kapoor with Sonam’s new song, Tareefan playing in the background!

Checkout the picture of her giant cake and some other pictures from her reception: (Also Read: Kapoor Family Is All Decked Up For Dear Sonam Kapoor's Reception At The Leela (Live Updates)) 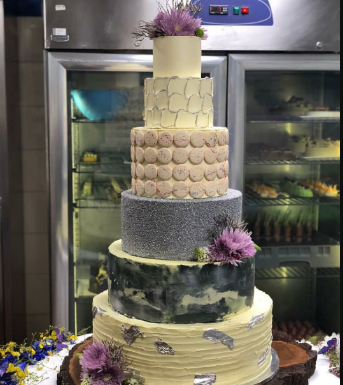 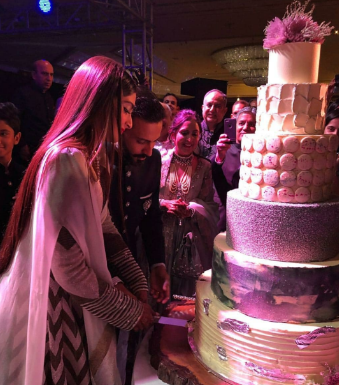 Sonam kept on surprising everyone with each and every outfit she changed into right from her mehendi to reception. Immediately after their traditional Sikh wedding, Sonam changed into a simple peach and golden lehenga-choli for her post-wedding cake cutting ceremony. She kept her make-up and hair bare minimal, because ‘Mrs Ahuja’ wanted all the focus to be on her chooda and the slight sindoor stroke on her forehead. (Checkout! Sonam Kapoor's First Look Post-Marriage, Looks Stunning In Chooda And Sindoor)

But that’s not all! Everyone was waiting to see the look of Sonam from her much talked-about reception. Sonam kept her look extremely minimal. She wore a black-white-golden lehenga, while Anand made it quirky with a black bandhgala which he teamed up with sneakers! How cool is that! (Don't Miss! First Look Of Sonam Kapoor Ahuja And Anand Ahuja From Their Reception (LIVE)) 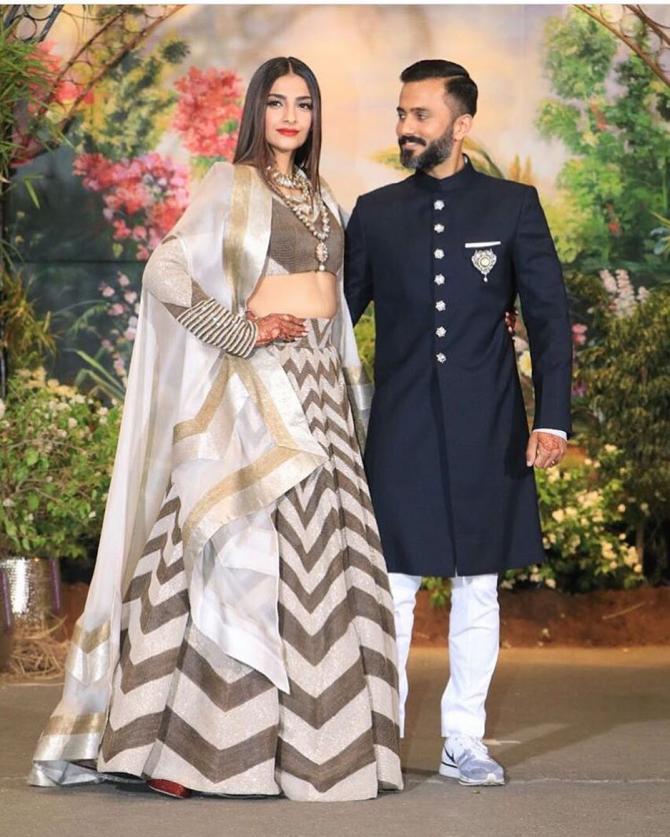 All the invitees at Sonam’s reception are in an all-black theme and needless to say, each and every guest looks no less than a dream at her reception. Celebrities who have arrived include Karan Johar with his mom, Hiroo Johar, Arjun Kapoor, Rishi Kapoor, Neetu Kapoor, Jackey Shroff, Juhi Chawla, Kangana Ranaut, Rajkumar Hirani, Vidhu Vinod Chopra, Javed Akhtar, and many others. B-town celebs have started pouring in, and we bring to you the pictures and videos from Sonam Kapoor and Anand Ahuja's reception party.

Sonam Kapoor and Anand Ahuja got married at a star-studded Sikh wedding today (May 08, 2018) in Mumbai. She looked beautiful in her red Anuradha Vakil lehenga which she teamed with a traditional and elegant chooda and jadau jewellery. (Read: Newbie Bride, Sonam Kapoor Adds Her Husband, Anand Ahuja's Surname And Is Now Sonam Kapoor Ahuja) Post-wedding scenes are very hectic for the new-bride and her hubby. As reported by leading daily, Mumbai Mirror, Sonam’s honeymoon is delayed as she will head off to French Riviera on May 14, 2018, to walk the red carpet at the Cannes Film Festival. Anand won’t accompany her to the event. A source close to the couple was quoted as saying, “Anand won’t be at Cannes with her, but the couple is planning an October-November honeymoon which will be delayed because of the bride-to-be’s choc-o-block schedule.”

Well, that's all for now folks! Stay tuned with us to know more about Sonam’s reception party.