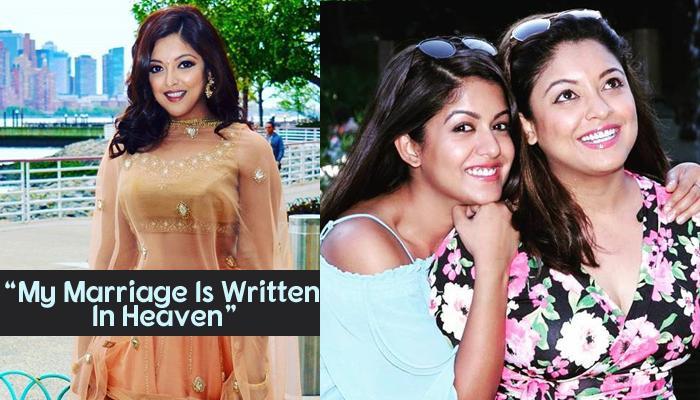 Wedding season is here and so are the weddings in the celeb world too. We along with their fans are enjoying the newsfeed being bombarded with the news of who is tying the nuptial knot, to who looked gorgeous and who is going a unique honeymoon destination. While we are getting close to Bharti’s wedding, one couple who recently got married is none other than the sister of actress Tanushree Dutta, Ishita Dutta and her co-star-husband Vatsal Sheth.

Recommended Read: When Hubby Saif And Ex-Shahid Met Before Kareena's Wedding, This Happened

One thing which was different in their wedding was that amidst all the celebs who came and graced the occasion, Ishita’s real sister, Tanushree was missing from her sister’s wedding. While that was really surprising for all of us, recently, a leading daily revealed the real reason behind her absence was that the former beauty queen was in the US and she couldn’t come to attend the wedding due to the travel permit issues.

Suggested Read: There Is A Connection Between Deepika In 'Padmavati' And Bride-To-Be Aashka Goradia, Know How

On the same, when sister, Tanushree was asked, this is what she stated to a daily tabloid and said:

"I am very happy for Ishita and Vatsal. It’s a new beginning for her."

She further added and said:

"I tried my best to be there, but unfortunately, could not make it. I am waiting to see my sister when she visits the US."

When asked about her marriage plans after her sister got married, Tanushree retorted:

"My marriage is written in heaven. It will happen whenever it is destined. I am single at the moment."

While we wonder when marriage is on Tanushree’s cards, we really hope it is soon to see her as the next beautiful bride-to-be. When asked to the newly-wed couple, Ishita and Vatsal about being married, this is what the cutesy couple said:

"It feels good to be married. For now, I just want to spend some quality time with Vatsal before I get back to work."

Also Read: 'Navya' Fame Somya Seth Got Hubby's Name Tattoed On Her Waist And It Looks Like This!

This is what newbie husband mentioned:

"I have always wanted to marry the right woman, no matter how long it took. With Ishita by my side, I feel that my life is complete."

Considering they always kept their relationship under the wraps and their engagement and marriage was also a private one when asked by a leading daily, this is what Ishita said:

"Our engagement and wedding were planned months ago, but we decided not to talk about it. For me, the only thing that mattered was getting married in the presence of my family and very close friends. We did not want a big fat wedding."

Like their secret wedding, their honeymoon plans seem to be on the same ground. Without the paparazzi knowing about the couple and without clicking them at the airport, the newbie couple has already left for their honeymoon.

Also Check:  When Bharti Asked Haarsh Why He Wants To Marry A 'Moti Ladki' Like Her, This Is What He Said

Yes, you read it right. As per one of the sources, it was revealed that the duo headed to Singapore as their honeymoon destination as they wanted to spend intimate time with each other. A source also revealed:

"Both of them wanted to go to Singapore. There was no discussion, no argument, they are so much in love."

For those who don’t know, the two met on the sets of Rishton Ka Saudagar....Bazigar and instantly clicked with each other. And so the love began thereafter. In fact, their love is such that it is being compared to legendary actor late Sunil Dutt and Nargis’ love story. Check how.