Shweta Tiwari is busy managing her professional and personal life. Recently, she took her son, Reyansh on the sets of her television show. Scroll down to see their fun-filled outing!

Being a mother is the most difficult job in the entire world because understanding your little one's needs is not at all easy. It requires you to be on your toes 24*7 without any offs. Things become even hard when you are a working mom as managing work and baby is a whole different experience. And television actress, Shweta Tiwari, who is all set to return to the small screen with show, Mere Dad Ki Dulhan, is trying hard to strike a perfect balance between her work and taking care of her almost-three-year-old son, Reyansh. (Recommend Read: Kareena Kapoor Can't Have Enough Of Punjab's Sarso Ka Saag, Makhan, Roti, Sis Karisma Kapoor Reacts)

Shweta Tiwari had given love another chance after a failed marriage with actor, Raja Chaudhary. She had tied the knot with Abhinav Kohli in the year 2013 and together they had welcomed their son, Reyansh in 2016. But this year, their marriage hit the rough patch as Shweta had lodged a police complaint against Abhinav and had accused him of domestic violence. And her daughter, Palak Tiwari (from her first marriage) had cleared the air with a long note. While the news of Shweta's troubled marriage has shaken the fans, the actress is back on her toes and is all set for a new start. Shweta is soon making a comeback on the small screen with a daily soap, Mere Dad Ki Dulhan. Currently, she is busy shooting for the same but being a super mom that she is, she made sure to take her son, Reyansh along. Today, on November 11, 2019, Shweta took to her Instagram handle and shared adorable pictures with her son, wherein the two are enjoying on the sets. In one of the picture, we can see Reyansh enjoying his time on swings. Alongside the pictures, Shweta wrote, "On the sets of #MDKD with #nanhayatri." Take a look at the pictures below: 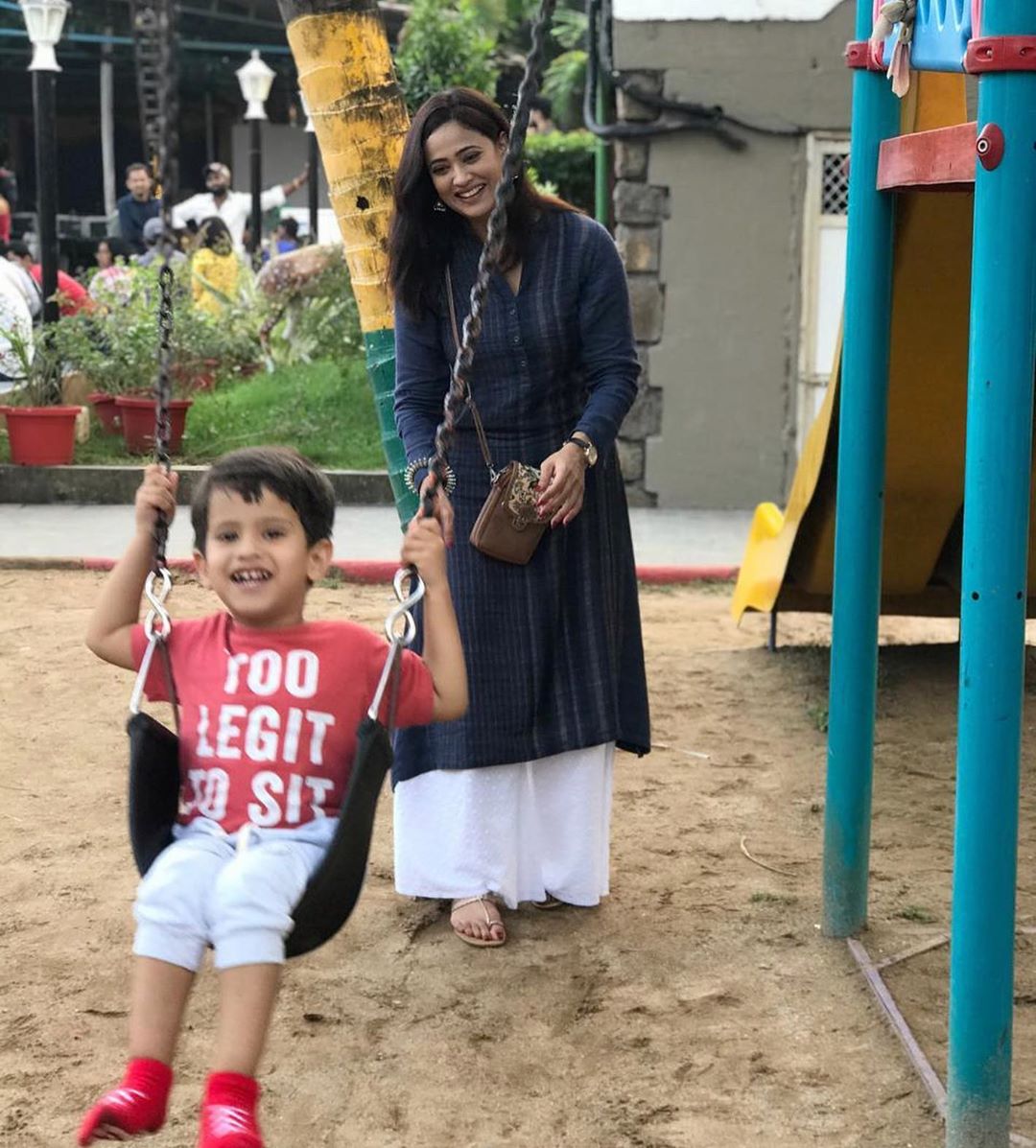 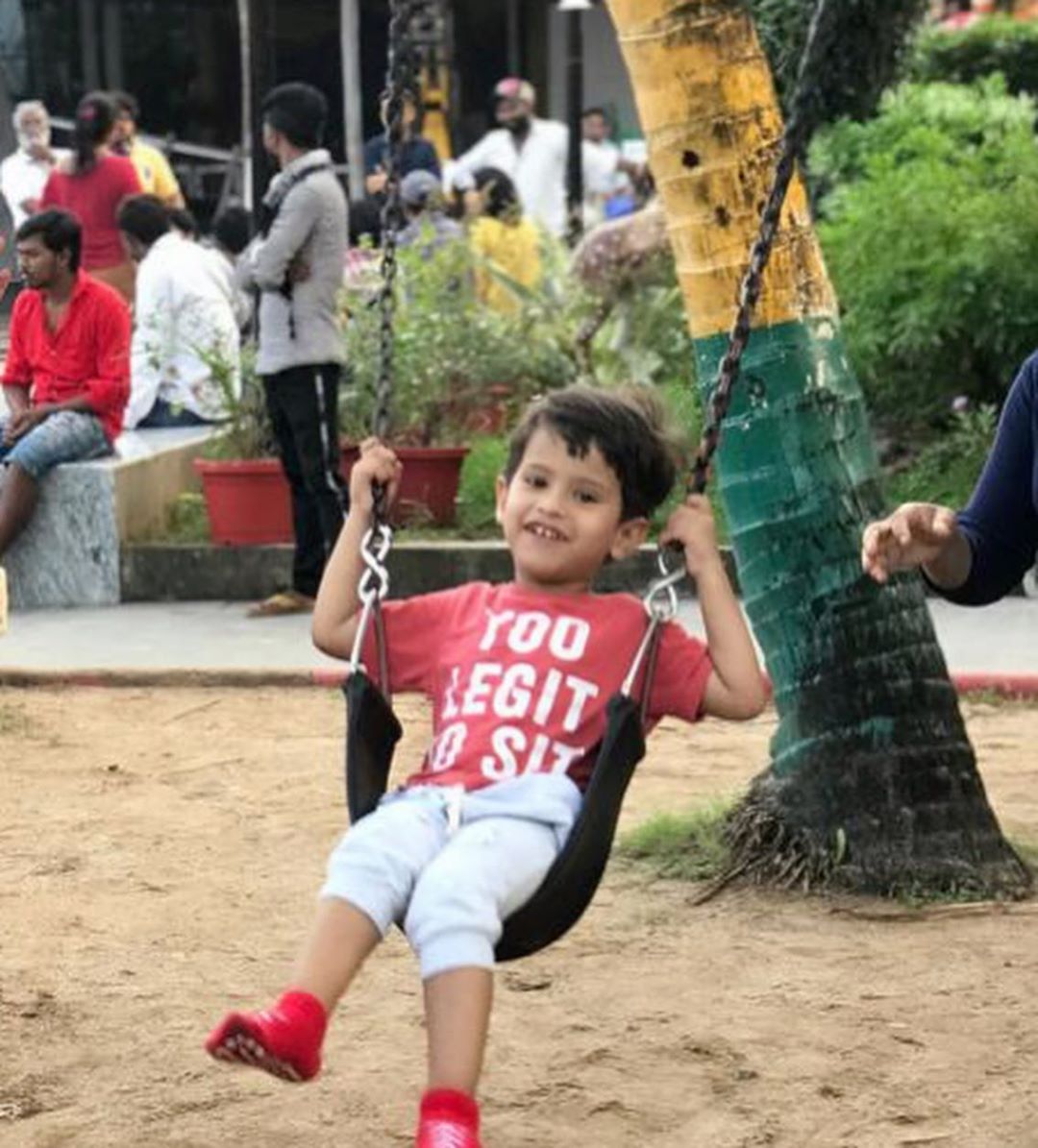 Ever since the news of Shweta's troubled marriage made it to the headlines, the gossipmongers had started speculation on what went wrong this time. Later, her daughter, Palak had opened up on the whole issue in a long note that could be read as "Firstly, I would like to thank everyone who’s reached out to express their concern and support. Secondly, I would like to address and clarify a few things out of my own rectitude: The media does not have the facts and they never will. I, Palak Tiwari, was on multiple occasions a victim of domestic abuse NOT my mother, except for the day that the complaint was filed he hadn’t hit my mother. As a reader of the news its often easy to forget that you do not know the truth of what goes on behind closed doors or how much fortitude my mother has shown in both her marriages. This is someone’s household you’re writing about, someone’s life you’re discussing. Many of you fortunately haven’t even dealt with something of such heinous proportions, and hence you have no right to comment, discuss or paint someone else’s image through your biased, misinformed views." (Also Read: Deepika Padukone Falls Sick After Fun At Best Friend's Wedding, Looks Like She Had Too Much Fun) 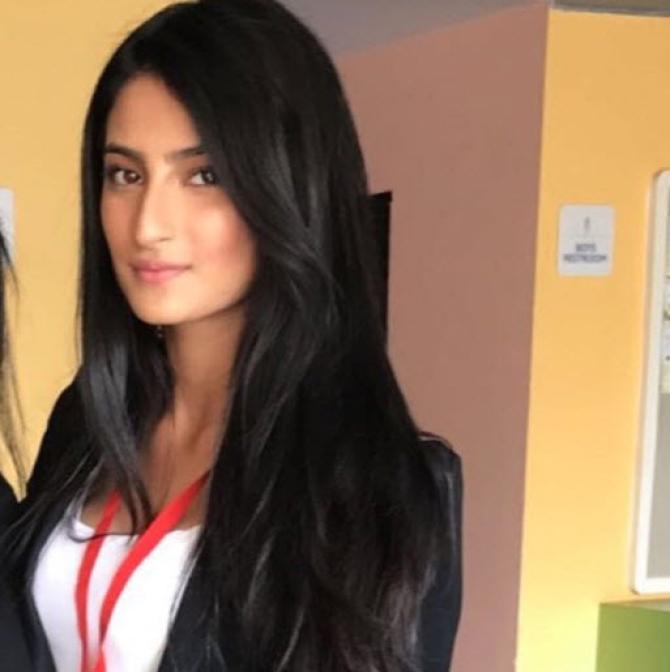 Palak had also written about the times when her step-father used to pass inappropriate comments that have left a mark on her. She had written, "It’s beyond disgusting and its time that I stand up for my mother for she is the strongest person I know and since out of all of us I’m the only person who’s witnessed her struggle day in and day out, my opinion is the only one that matters. Abhinav Kohli has never physically molested me or touched me inappropriately. Before spreading something of this calibre or even believing it, it is imperative you as readers know the veracity of the facts that you’re blindly divulging endlessly. However, he did persistently make inappropriate and disturbing remarks the impact of which is only known to my mother and me, and if any woman from any walk of life were to hear them she would be greatly embarrassed and provoked too. Words which would question the standing dignity of any woman, which you wouldn’t expect to hear from any man, especially not your “father”. Seeing our lives through social media, reading about us in the papers can only tell you so much about our struggles, but never enough to comment on them. Today as a proud daughter, I’m here to tell you that my mother is the most respectable individual that I’ve ever come across, the MOST self-sufficient, one who’s never required or even had a man provide for her and has always taken the social standing of a “man” in both the families that we’ve been a part of." On the other hand, Shweta has made a dignified silence and doesn't pay any heed to what the world is saying while her husband, Abhinav and his family is trying hard to prove their innocence. (Don't Miss: Sakshi Tanwar Feels Daughter, Dityaa Is The Answer To All Her Prayers, Gave New Meaning To Her Life)

Well, we cannot wait to see Shweta back on television! What about you?