While some celebrities like a lavish wedding affair, some choose to keep it an intimate and a secret one. And it seemed like Sonam Kapoor and Anand Ahuja was not the only couple who are speculated of getting hitched in 2018. The Telugu and Tamil actress, who has also worked in Hindi movies, has captivated millions of hearts with her amazing performances. We are talking about none other than Ajay Devgn’s on-screen wife in the film Drishyam, Shriya Saran.

According to Mumbai Mirror, Shriya was rumoured to tie the nuptial knot with her Russian boyfriend in March. Because Shriya hasn’t posted any picture of him on her Insta, so the details of her prospective groom are still not known. According to the sources, Shriya met him recently at a party and had decided to walk down the aisle with him. Shriya refused to talk about her personal life and said, “My life is filled with interesting stories. Let’s talk about my professional life. My private life is not for sale. I am an actor. I’m here to talk about my films.” Her mother was also quoted as saying, "No, it's all rumours that keep resurfacing. She has to attend her friend's wedding in Rajasthan and had ordered clothes and jewellery for it. In fact, she has to attend both, a relative's and a friend's wedding this month and in March. That's probably why this has gone viral." (Also Read: 'Fanne Khan' Actor Raj Kummar Rao Reveals His Marriage Plans With Patralekhaa)

But according to a source close to the actress, her wedding preparations are going on in full swing. The source said, “Preparations are on in full swing and Shriya has been ringing up close friends and colleagues to invite them for the wedding. It will be a traditional Hindu ceremony planned months in advance with a Holi-themed celebration, with the sangeet and mehendi preceding the shaadi.” Shriya earlier in an interview admitted that she is under pressure of getting married from her parents and will get hitched soon. There were reports that Driysham actress has zeroed to the city Rajasthan for her destination wedding. And apparently, she is in Russia to meet her future-in-laws to finalise everything.

Shriya has completed 18 years in the industry and having spent so many years in this profession, Shriya initially never thought that she will be in the film for a long haul. She is a Lady Shriram College alumnus, who auditioned for a music video on the motivation of her Kathak teacher Shovana Narayan. And this is how she bagged her first Telugu film, about which she said in an interview with The Hindu, “I was an embarrassment for the team. Vikram (Kumar) told me, ‘you finish this and go back to college; this world is not for you’. I’d sit on the floor and read between shots; I would walk to the shooting spot even if it meant being delayed. I didn’t understand this south Indian fixation with punctuality; I thought there’s no harm in a 10-minute delay.” (Also Read: Bigg Boss 11 Contestant Hina Khan Reveals When She Is Getting Married To Beau Rocky Jaiswal)

After an amazing professional career, we wish Shriya all the love and happiness for her personal life.

Next Read: 'Saath Nibhana Sathiya' Actor Vishal Singh Is Dating A Pretty Lady And She Is A Single Mom 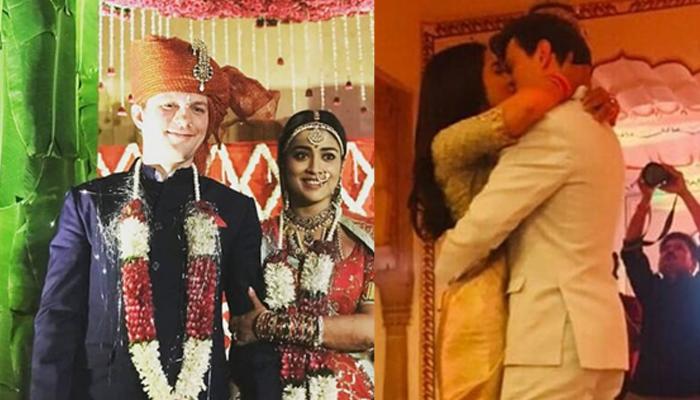 Drishyam actress, Shriya Saran got married to her long-time Russian boyfriend, Andrei Koscheev, on March 20, 2018, in Udaipur. Initially, Mumbai Mirror reported that Shriya and Andrei have settled in matrimony but when Shriya was asked about the same, she commented, “I don’t want to comment on it!” But then, no