A picture from Shloka Mehta’s mehendi ceremony has emerged which is enough to blow off our minds! Dressed in Abu Jani Sandeep Khosla ensemble which is a pastel-hued hand-embroidered lehenga. 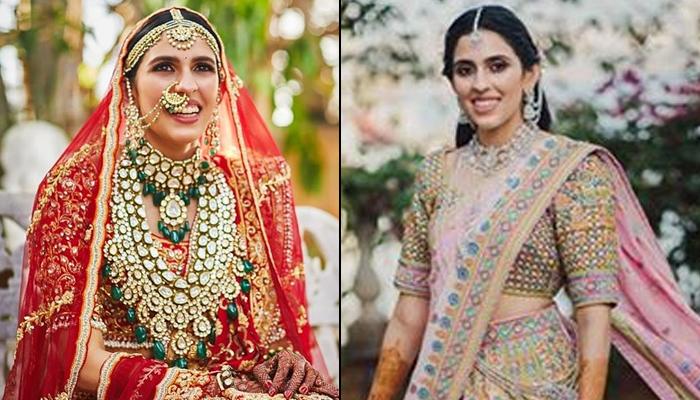 2018 was a season of love, weddings, fairy tales and no, we aren't complaining! 2019 began with the most grandiose and star-studded wedding of Akash Ambani and Shloka Mehta. After a week-long pre-wedding festivities in St Moritz, Switzerland and Mumbai, Mukesh Ambani and Nita Ambani’s son, Akash embarked on his journey of ‘happily ever after’ with Shloka Mehta, daughter of Russell Mehta and Mona Mehta, on March 9, 2019, in Mumbai amidst family, friends and bigshots from all around the world. (Also Read: Janhvi Kapoor Reveals One Thing She Fights About With Khushi Kapoor, Every Sister Can Relate With It)

For the wedding, Shloka Mehta dazzled in her super-happy bride look, donned in an all-red avatar and keeping her makeup minimal. The bride wanted to divulge maximum attention to her exquisite wedding jewellery, which included a heavy kundan necklace, maatha patti, nath and traditional earrings. The badi bahu of the Ambani parivaar went by the bridal colour of red and golden, and we loved her traditional bridal look. Here’s a photo of Shloka Mehta from her bridal photoshoot:

And now, a picture from Shloka Mehta’s mehendi ceremony has emerged which is enough to blow off our minds! Dressed in Abu Jani Sandeep Khosla ensemble which is a pastel-hued hand-embroidered lehenga that she has teamed up with minimal diamond jewellery. The designer duo captioned her first mehendi look as, “Love in Full Bloom! Shloka Mehta exudes romance in #abujanisandeepkhosla Photography - @reelsandframes Hair: @hairbypriyanka Make up: @puneetbsaini Draping - @dolly.jain #abujanisandeepkhosla #shlokamehta #mehendioutfit #stunning #gorgeous #lehenga #abujani #sandeepkhosla.”

On April 1, 2019, the newly-wedded couple, Akash Ambani and Shloka Mehta along with the Ambani clan including Mukesh Ambani, Nita Ambani and Isha Ambani Piramal went out for a family dinner at Wasabi By Morimoto, Taj Mahal Hotel. Dressed in casuals, the Ambani clan was all smiles for the camera as they posed for a happy family photograph. It was the first picture of Mrs Shloka Mehta post her wedding with Akash Ambani and she can be seen twinning with her darling husband in their monochrome look, on a casual outing with her in-laws:

Post getting engaged in 2018, Shloka Mehta had talked about the bond that she shares with Akash Ambani and keeping pace with her relationship despite their hectic schedules. Shloka was then quoted as saying, “Despite years and busy schedules, we have always found ways to stay connected. Akash is incredibly grounded, and we share a bond based on meaning and memories. We don't just get along - we also support each other's hopes and aspirations and are determined to build a sense of purpose into our lives together. We are lucky to have a love that began with being best friends and luckier still to have such supportive families.” (Also Read: Misha Kapoor Cuddled In Shahid Kapoor's Arms Proves That Two-Year-Old Missy Is Daddy's Little Girl)

In a 2018 interview, Nita Ambani was all-praises about her then soon-to-be daughter-in-law, Shloka Mehta and had stated, “I have known Shloka since she was four and we are all delighted to welcome her to our home and our hearts.” Akash Ambani also talked about his then-to-be wife, Shloka Mehta and was quoted as saying, “I am truly happy that our friendship has blossomed into love and Shloka and I are getting married, she is a truly special and extremely kind-hearted person.”

For the uninitiated, the newest member of Ambani family, Shloka Mehta is the director of the Rosy Blue Foundation and co-founder of ConnectFor, which matches volunteers with NGOs that need them. Do you know that Akash Ambani had proposed his ‘crush’, Shloka Mehta on the last day of school? Obviously, Shloka had said ‘yes’ to his proposal and they even told their families about it. Akash and Shloka were advised to keep their relationship a secret to avoid unwanted media attention. (Also Read: Twinkle Khanna Did A Health Checkup Of Akshay Kumar's Family Without His Knowledge Before Marriage)

This first glimpse of Shloka Mehta’s mehendi ceremony has made us crave for more. What about you, guys?