Years after their marriage, Twinkle Khanna had revealed that she had done a complete background health checkup of Akshay Kumar's family to avoid medical discrepancies. 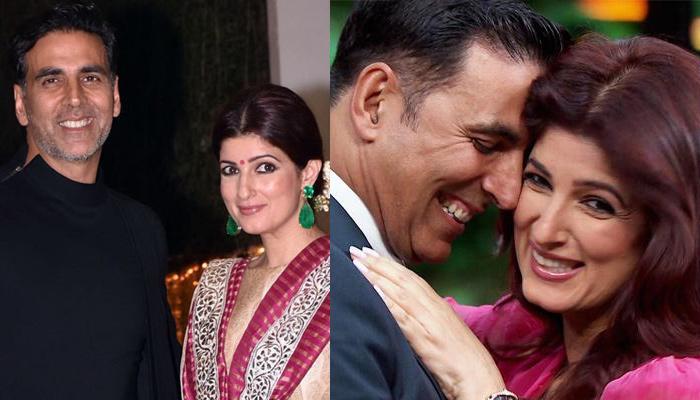 Admit it or not, during your multitudinous day-dreaming sessions, you have at one point in time or other, thought about marriage and who would your life-partner be (only for the singles though!). As exhilarating as it may sound, marriage comes with truckloads of love, happiness, contentment and not to forget, responsibilities! Keeping up with a happy marriage, can be the best thing for a couple and who can teach about a ‘happy marriage' better than Akshay Kumar and his gorgeous wife, Twinkle Khanna? (Do Read: Unseen Pics Of Radhika Merchant Dazzling In Pink-Orange Lehenga At Akash-Shloka's Wedding Festivity)

Married for over 18 years, Akshay Kumar and Twinkle Khanna redefine #CoupleGoals in themselves! While the Mister is famous for his energy, fitness and talent, the Missus can defeat anybody with her words and wit. Akshay and Twinkle had gotten married on January 07, 2001, amidst a gathering of just 50 odd people, and that too, in just two hours. News of their marriage came out in the media much later and it was only then people believed that then flamboyant-natured Akshay is now a married man.

After 15 years of their marriage (in 2016), an interesting fact about Akshay Kumar and Twinkle Khanna courtship days had come up, when at Koffee With Karan season 5, the latter had revealed that she had done a complete background health checkup of her then soon-to-be beau's family to avoid any medical discrepancies! Stating the reason, Twinkle had revealed, “The reason you get married is primarily to have children. So, you are introducing this genetic strain into your family line. I wanted to know what are the diseases running in his family. At what age did his uncles lose their hair. What did Kanchan chachi die of.”

While host of the show, Karan Johar, and his guests, Akshay Kumar and Twinkle Khanna burst out laughing, the Kesari star had stated that he got to know about the same only after they were married. While Akshay admitted to the fact that he was annoyed over this at the beginning but later realised that wife, Twinkle had a valid reason to do so. But the main question was, if Akshay’s family had passed the litmus test? And this is what Mrs Funnybones had replied, “They did pass my litmus test. Most of them are still alive because they have healthy genes!” (Must Read: Karan Johar Unveils His Wax Statue At Madame Tussauds, Singapore With Mom, Hiroo Johar)

While you still might be guffawing over Twinkle Khanna’s wit, remember that fun, throwback, Koffee with Karan chat, wherein, when Karan Johar had asked Twinkle about that one thing which Akshay has, but no other hero possesses and the Mela star had replied, “A few extra inches (pauses)…vertically.” And when it comes to taking digs at each other, Akshay Kumar too, isn’t left behind. In an interview on a chat show with Rajeev Masand for CNN, Akshay was asked about what he felt on Twinkle’s career switch (from acting to writing). To which Akshay had hysterically replied, “Yes, looking at the 14 films what she has done, writing has been her best decision!"

Twinkle Khanna in an interview with Mid-Day, spoke about their 18 years of strong friendship. She had shared, “I'd say our social, political ideologies, sense of humour, are very different. What's interesting is that after the first few years, we gave up trying to change each other. What we did instead was start to learn from each other. Luckily all his strengths are my weaknesses, and vice versa. What would I learn if we were more like each other anyway? I really believe two peas in a pod died of inertia. And we are not like that. So we continue to grow. Marriages essentially fail, when you try to clone the other person to become like you, it's not possible. We're two different brains. Mine is a washing machine, whirling, chaotic. His thoughts are neatly folded in the closet of his mind. I need his stability to hem me in. He needs me to push him out of his comfort zone."

Both Akshay Kumar and Twinkle Khanna have always been full of praises for each other. In an throwback interview with Filmfare, the Housefull actor had revealed how his wife has always been a constant source of inspiration and support system for him, “Twinkle has not only added to my wardrobe but also to my bank balance. I was a scattered person; she is the one who has put me together. After marriage, she has kind of raised me (Laughs). On a serious note, whenever I’ve broken down she’s given me emotional support.” (Also Read: Sonali Bendre Was Shattered But Never Thought About Death When She Learnt Of Her Cancer)

And at another interview with HT, Akshay Kumar had shared, “Tina (Twinkle) is my best friend. My wife is the best person any man could wish to wake up next to. She holds me up when I’m falling, and puts me down when I’m flying. She makes me laugh when I’m sad, and moans when I am sitting idle. Tina is everything for me. She is my reality check."

Isn’t this super-sweet? Guys, how do you take a dig at your spouse? Keep us posted!