Shilpa Shetty Kundra talks about balancing work and married life and recalled the time when she had to choose between a film and her then-boyfriend, Raj Kundra. 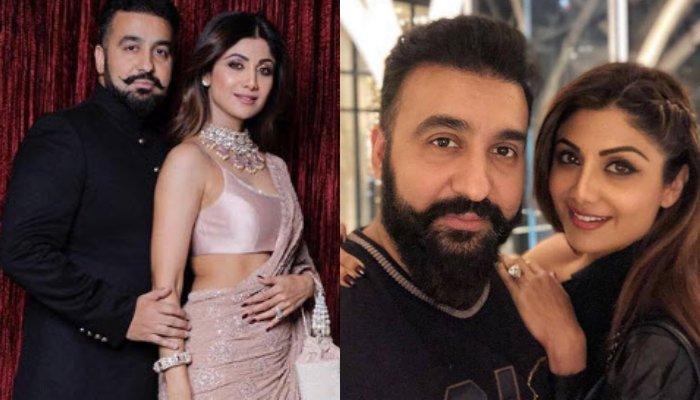 Wedlock is a pious bond. Two people, madly in love, all set to spend an eternity together. It might sound overwhelming, but believe us you, marriage is another gateway to a beautiful beginning. Sharing the load together, looking at individual problems and solving it as ‘us’, planning to introduce a third member in their lives, plus tacking finances and home, a marital bond has roots dug deeper than you imagine! And who can teach us how to multitask other than one of the hottest stars, who’s ageing like fine wine, Shilpa Shetty Kundra and Raj Kundra? (Do Read: Mira Kapoor Gives Us A Quick Glimpse Of Her 'Sunshine', Shahid Kapoor, Video Inside)

Shilpa Shetty Kundra and Raj Kundra have been married for over 10 years and are a super-happy couple. Whenever we come across glimpses pertaining to their daily activities or social media PDA, you will not believe that such kind of mushy romance exists even after 10 years of marital togetherness! From referring to each other as boyfriend-girlfriend to posting cheesy comments on each other’s posts, Shilpa Shetty Kundra and Raj Kundra are almost synonymous to #CoupleGoals! In a recent interview with the Bombay Times, Shilpa revealed some never known facts about her marriage.

In the interview, Shilpa Shetty Kundra talked about balancing work and married life and recalled the time when she had to choose between a film and her then-boyfriend, Raj Kundra. She revealed, “I had been working since I was 17 and I got married at 32. I was ready for marriage. I wanted to have a baby, which is one of the key reasons to get married. I was eager to accept a new role in my life — that of a wife, a mother, and so on. I’m very middle-class in the way I function and think. I don’t regret the fact that I married at a time when I was doing really well in my career. Being a wife is a great role to play in life and I do that to the T, par mujhe apni pehchaan bhi chahiye thi. I didn’t want to be dependent on another person in any manner. I am a feminist in that sense, I want my space to make my choices. I remember I was shooting for a film called The Man with Sunny Deol. His dates were constantly getting shuffled. Raj (husband) gave me an ultimatum to get married or quit the relationship. I had to choose between The Man and my man.”

And what did she choose? Shilpa Shetty Kundra shared, “I chose the latter. And guess what? Sunny eventually shelved the movie. Imagine, if I had made a different choice back then, I would have been sitting at a salon colouring my greys without my man (laughs!). Sometimes, you have to make a decision at the moment. I don’t live in the past or the future. I live for now. I had a chance to headline Eastenders (British TV series) and settle in London, but I was keen to begin a new phase of my life. I wanted to go on holidays, enjoy my time and find peace. When Raj proposed to me, it all felt right. And trust me, I am not a conventional thinker. I was okay with the idea of being in a live-in relationship and having a baby out of wedlock, if my parents had permitted me to do it. But I made some conventional choices for the love of my mother and the respect that I have for the institution of marriage.”

It is most likely that you will soon get to see Shilpa Shetty Kundra in films. She had stated, “We have long chats about my comeback to the movies and he’s quite prepared for it. He supports my decision. With the kind of equation that we share, I know he will be my eternal boyfriend. He hardly behaves like a husband. In fact, today, if I’m exploring various businesses, it’s because he showed me the way and I chose to follow it.” (Must Read: Diyvanka Tripathi And Vivek Dahiya Kickstart Their 3rd Wedding Anniversary Celebration With A Trip)

It was in 2017 when a sad rumour broke our hearts: 'Shilpa Shetty Kundra and Raj Kundra are getting divorced' it read. Shilpa personally had to intervene to banish all such rumours and let us heave a sigh of relief. She was quoted as saying, “It is complete rubbish. I don’t even know where these rumours came from. I believe in the institution of marriage, and I love my husband. Many of my relatives from London, UK, called up, and they were really worried about these rumours. They were going through all the news channels back home."

Not just this, Shilpa Shetty Kundra was furious over her divorce rumours. She had then shared, “Can you believe that? Kya sochkar likhte hai yaar. Even Raj and my friends were so embarrassed. I think some of my friends were having a party and they were scared to call Raj and me as they believed the rumour. One of them called and said ‘accha humne ghar par party rakhi hui hai aa jaana’. As I was traveling, I got to know from them about the rumour. I think it’s part and parcel of being a celebrity. People sometimes are bound to write rubbish. I have learnt to take it in my stride but that was very distasteful."

Shilpa Shetty Kundra had further added, “Why would there be a problem? You are mad or what? I love my husband. He is my soulmate, touchwood! I think because I kept quiet, it was blown out of proportion. I am not one of those who really believes that I need to clarify anything to anyone. Unless it is something that I just feel is uncalled for. I always believe ‘agar maine isse zyaada importance diya toh aur bada ho jayega’. That’s the reason I kept quiet and I suddenly saw it snowballing. I even called my PR, who is a very old friend of mine, and I said what the hell is happening, you will have to stop this now, it’s really irritating me." (Also Read: Rohman Shawl's Cryptic Posts On Relationships Make Us Wonder If It's A Hint For His GF, Sushmita Sen)

But all’s well, that goes on well! Isn’t it, dear readers?