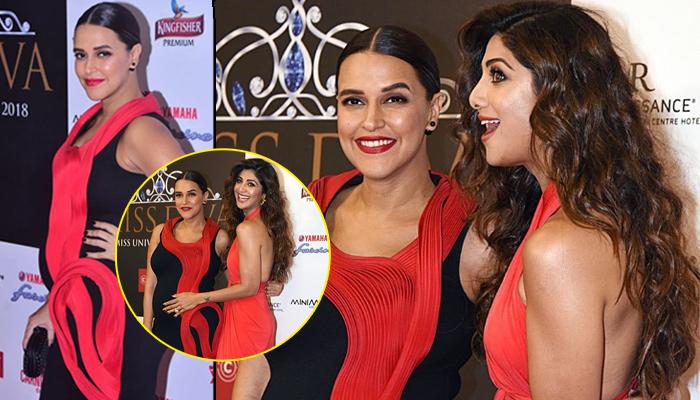 Turned out the rumours and speculations were indeed true! Tumhari Sulu actress, Neha Dhupia and Tiger Zinda Hai actor, Angad Bedi announced their pregnancy after four months of their hush-hush wedding. Just like they took everyone to a pleasant surprise with their intimate Gurudwara wedding, newly-weds Angad and Neha’s pregnancy announcement too gave their fans a sweet astonishment. (Also Read: Famous Bollywood Actresses Who Have Won Major Beauty Pageants And Their Husbands)

With 2018 bringing in a lot of firsts for the lovebirds, Angad Bedi and Neha Dhupia, the latter has made us drool over her maternity sartorial choices. Even before you pop, Neha’s fashion choices are the best vogue guide for all mommies-to-be to style themselves. And staying true to her style and her effortless silhouette choices, Neha graced the red carpet of Miss Diva Miss Universe India 2018 beauty pageant.

Neha opted for a fitted black gown with red detailing and flaunted the baby bump with her ‘not-to-be-missed’ pregnancy glow. She kept her hair in a sleek bun, neutral make-up and red lipstick. On the other hand, the other judge of the beauty pageant, Shilpa Shetty Kundra looked smoking hot in a scarlet red gown. Neha and Shilpa greeted each other at the red carpet, and the latter posed candidly with the former’s baby bump. Hugging preggy Neha, Shilpa congratulated her for the baby and said, “I’m so happy for you.”

In the media interviews post their pregnancy announcement, Angad and Neha seem to be on cloud nine while talking about welcoming their child and what kind of parents they will be et al. In one of the interviews with the Times Of India, Neha shared that her hubby, Angad will be a ‘rock-solid’ father, “This is a very tough one (to answer) but yes, his reaction was really amazing. Even before we are there, I can say for sure that he will be a rock-solid father, the way he is a rock-solid husband. And, in every aspect, he is respectful and has a great set of values. I have only seen him around our nieces and nephews, and he is absolutely wonderful with them. I cannot wait to see him change diapers… I will put up a video of that.” (Also Read: Neha Dhupia's Sister-In-Law Neha Bedi's Birthday Wish For Her Proves That She's Proud Of Her Bhabhi)

Neha Dhupia’s due month is November and she is planning to work until then. Speaking about balancing work and pregnancy, the Helicopter Eela star shared with PTI, “A lot of people think that when you are in a situation, especially the one I’m in, there are lots of people who work and caution around you and it is wonderful to see that love and care. I represent a certain section of women who believe in working.” She further added, “When I come out and work, I feel even better about it. As a couple, we don’t make a big deal out of anything which is also great. People are like ‘Oh my god. You should now go home and look after yourself’. They have been very supportive.”

On August 24, 2018, Neha and Angad gave the big and much-anticipated announcement on their social media handles. Sharing the array of pictures that they both shared from their pregnancy photo shoot, Neha captioned them, “Here’s to new beginnings ... #3ofUs #satnamwaheguru”, while Angad wrote, “Ha! Turns out this rumor is true.. #3ofus #satnamwaheguru”.

Isn’t the bond between two actresses, Neha Dhupia and Shilpa Shetty Kundra, beyond adorable? Do let us know in the comments section below.