Ever since Eve first ate the apple from the Garden of Eden, all the Adams in this world are trying to figure out what makes a woman happy! From how to impress their lady, how to know what she wants to how to know if you should confide in her and read between her lines, these questions are hounding men since the beginning and only some lucky men have found the answers. Shilpa Shetty Kundra’s businessman husband, Raj Kundra is one such lucky man. Shilpa and Raj tied the knot on November 22, 2009, but the speculations about them parting ways and opting for divorce have been surrounding them from time and again. (Also Read: Anil Kapoor And Anand Ahuja Twin On Their 'Boys Day Out', Arjun Kapoor's Reaction On It Is Hilarious)

Shilpa Shetty Kundra and Raj Kundra have successfully managed to keep their relationship guarded against such conjectures and have completed 10 years of marital bliss. Shilpa and Raj are blessed with a son, Viaan Raj Kundra and the trio makes for a perfectly happy family. Recently, Shilpa and Raj’s divorce rumours had hit the headlines again which got her mom, Sunanda Shetty worried. But this time, Shilpa’s co-judge and filmmaker, Anurag Basu is the one to be blamed. On the sets of Super Dancer Chapter 3, wherein Shilpa Shetty Kundra, Geeta Kapur and Anurag Basu are the judges, prankster Anurag played the deadliest prank on the Baazigar star and the choreographer revealed this prank to her much later. So, Anurag got hold of Shilpa’s phone and dropped a text to her mother that she had a huge fight with her husband, Raj and hence decided to divorce him. When Geeta told Shilpa about the prank, she immediately took away her phone from dada (as Anurag is commonly known), but the message was already sent. 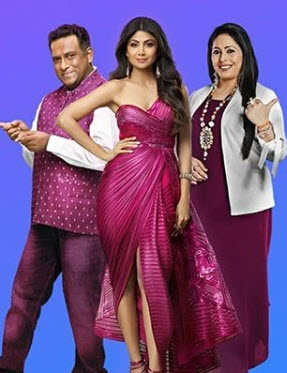 Shilpa Shetty Kundra then called her mom, Sunanda Shetty to explain to her that the text was only part of the prank. As per a DNA report, Shilpa had said to her mother, "No need to panic Maa. Everything is fine. Anurag dada sent that message from my phone. Don't ever believe if you get any messages that I am pregnant or separating till I myself come and tell you." 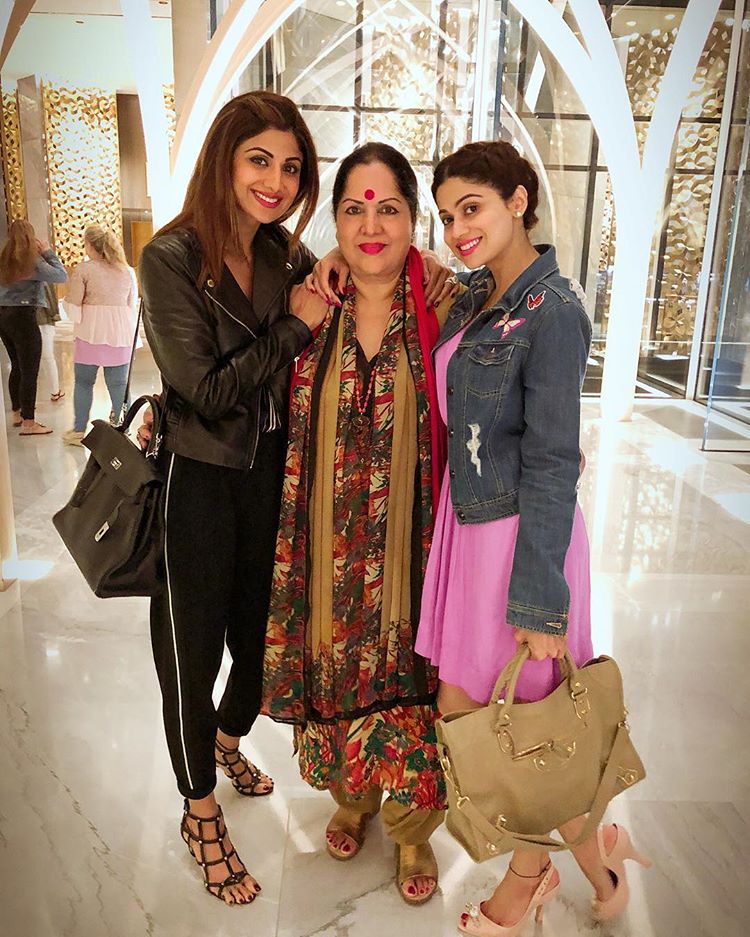 Shilpa Shetty Kundra shared some fun-filled candid clicks from the sets with her co-judges and wrote, “This picture/moment describes our relationship..no pretences, all heart, laughs and how much you both trouble me. I wanna throttle you #dada for the pranks you (both) play on me. This one was the pits (Can’t even ....) Uff !!!it’s for all to see this Saturday on #superdancer @geeta_kapurofficial some things I can’t describe, that’s my bond with you, like ..Stupendofantabulouslyfantasmagoricalymagical Love you both. Thank God for our madness I look forward to our days and more memories together. Thanks @tranjeet @sonytvofficial #ashish @rithvik_d @iamparitoshtripathi ...for this team that’s become family ( No this is not an ad nor it is the end) Sometimes u must express what you feel. So jusssss saying #superdancer #love #gratitude #happiness #dance #mad #judges #friends #forlife #cray #instapic”. 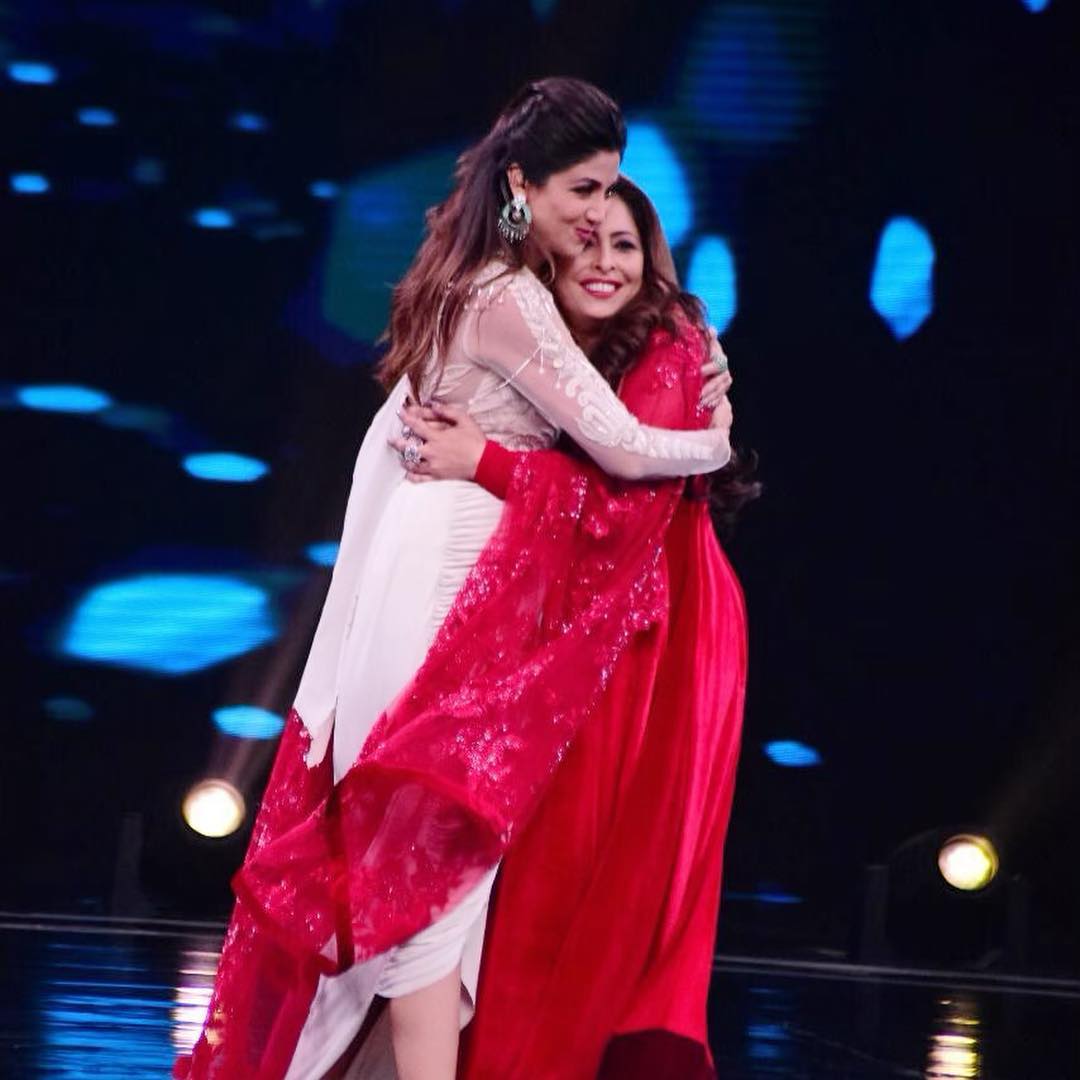 Earlier, Anurag Basu had managed to make Shilpa Shetty Kundra's sister, Shamita Shetty believe that Shilpa was apparently pregnant with her second child. According to a DNA report, the filmmaker took Shilpa's phone and texted Shamita to say she's pregnant. Anurag, Shilpa and Geeta bond well with each other on the sets of the show and keep pulling each other's leg. A source was quoted by DNA, “During the break when Anurag got the opportunity to take away Shilpa’s phone, he texted her sister Shamita Shetty from her phone that she is pregnant. Shilpa started getting a number of calls from her sister and congratulatory texts on the news!” (Also Read: Aarti Chabria Of 'Khatron Ke Khiladi 4' Gets Engaged To Visharad Beedassy, Details Inside) 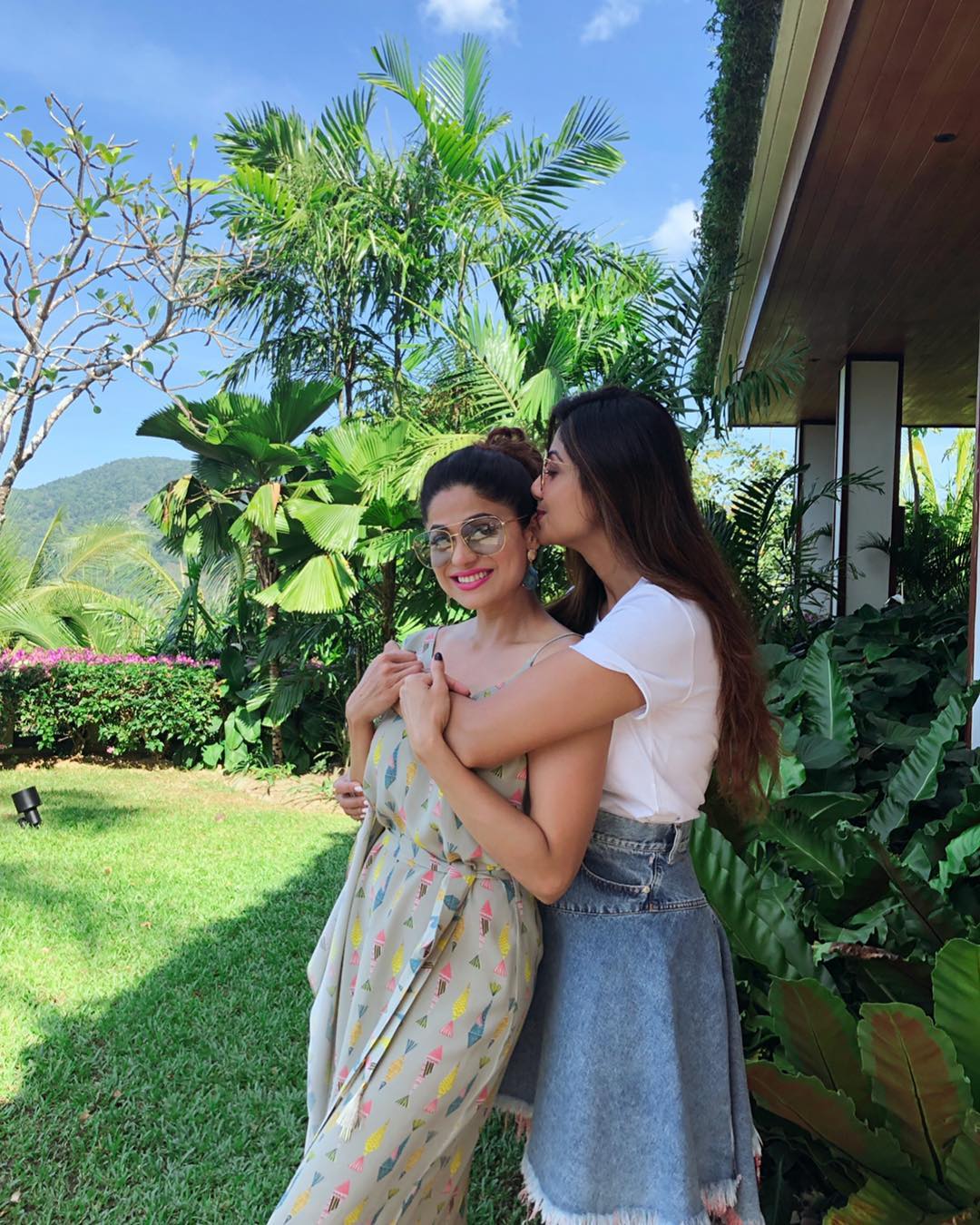 The source further added, “It took some time for her to convince Shamita that she is not in the family way again and then realised that Anurag was the culprit. She, however, laughed it off, as she is used to her Metro director’s pranks. Once he had removed the batteries from Shilpa’s mic without her knowledge and during the shoot, her voice couldn’t be heard. The shoot had to be stalled to get it fixed again!" Shilpa Shetty Kundra and Raj Kundra are a happily married couple and in his interviews, Mr Kundra has revealed secrets to their successful marriage. In one of his interviews, Raj talked about sharing the burden with his wife, Shilpa and he meant not only in domestic chores but also involving her in business and expansion plans. He had said, “One big perk is you get to share the stress of work and appreciate each other a lot more. You get to spend more time together. You understand each other better so decisions can be made much more easily.” 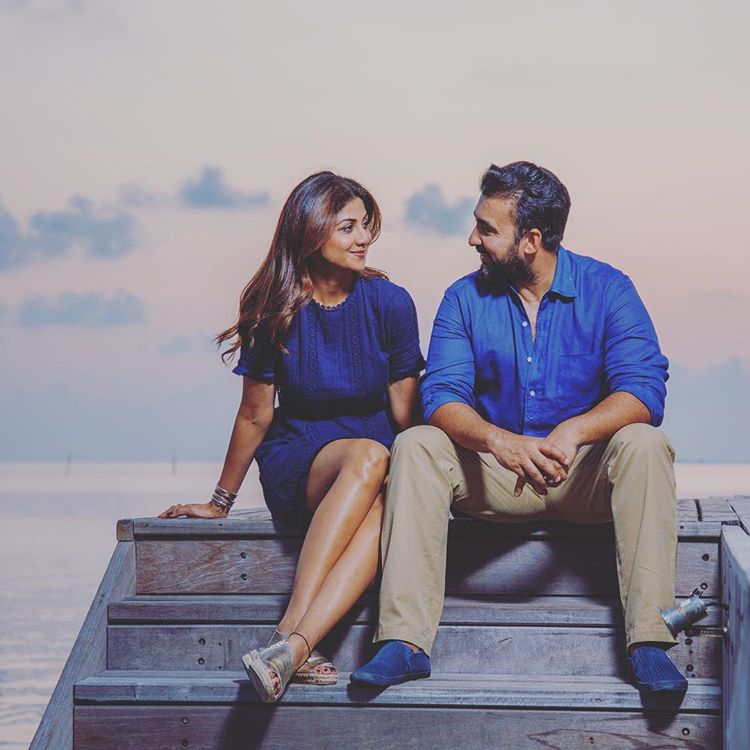 Sharing some tips on how to impress a girl, Raj Kundra had stated, “If your girl says she doesn't want a gift, trust me; make that day special! Every woman likes to share the joys of her man treating her right with her friends. So, the sweeter the gesture, the longer the way it will go.” How to make occasions even more special, he was quoted as saying, “Don't treat it as any other day. Show some enthusiasm towards the day and do something you wouldn’t normally do for her on a daily basis. A good way to impress your lady would be by doing something crazy for her that would make her feel like she means the world to you.” 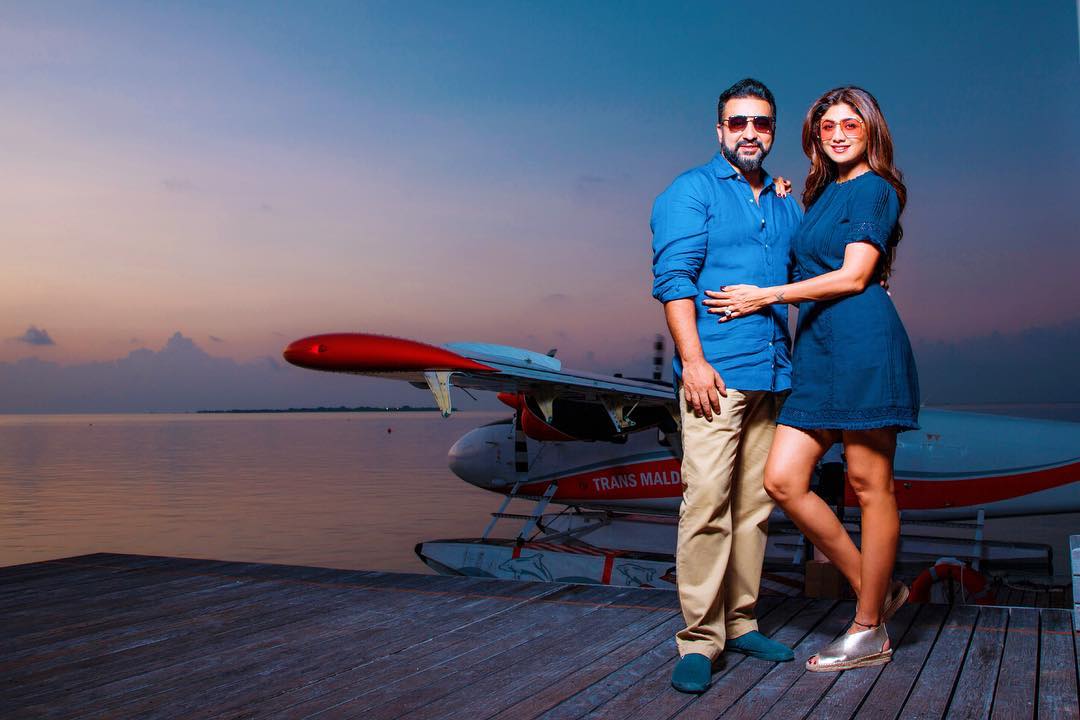 In 2017, when rumours about Shilpa Shetty Kundra and Raj Kundra’s divorce had grabbed the headlines, the actress clarified the same and had said, "It is complete rubbish. I don’t even know where these rumours came from. I believe in the institution of marriage, and I love my husband. Many of my relatives from London, UK, called up, and they were really worried about these rumours. They were going through all the news channels back home." 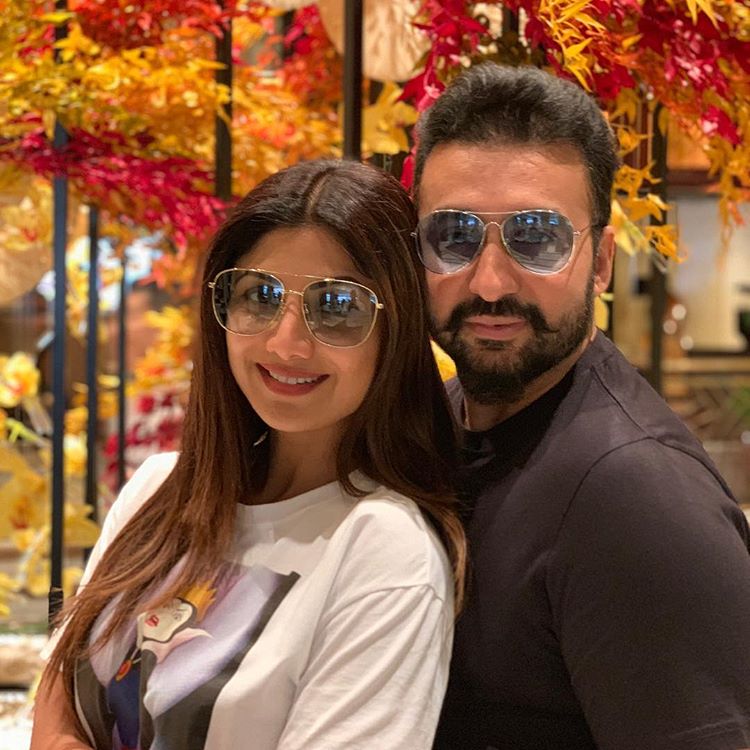 Speaking about such speculations being ‘unfair’ to the celeb couples, Shilpa Shetty Kundra had added, "There has to be a line drawn somewhere. If journalists hit us below the belt, it hurts, because we are only humans. Whoever put out that article should have at least cross-checked. It’s unfair to us." Furious Shilpa went on to add, "Can you believe that? Kya sochkar likhte hai yaar. Even Raj and my friends were so embarrassed. I think some of my friends were having a party and they were scared to call Raj and me as they believed the rumour. One of them called and said ‘accha humne ghar par party rakhi hui hai aa jaana’. As I was traveling, I got to know from them about the rumour. I think it’s part and parcel of being a celebrity. People sometimes are bound to write rubbish. I have learnt to take it in my stride but that was very distasteful." (Also Read: Neeti Mohan Blushes As Aditya Narayan Calls Her 'Nayi Naveli Mrs Pandya', Nihaar's Reaction Is Epic) 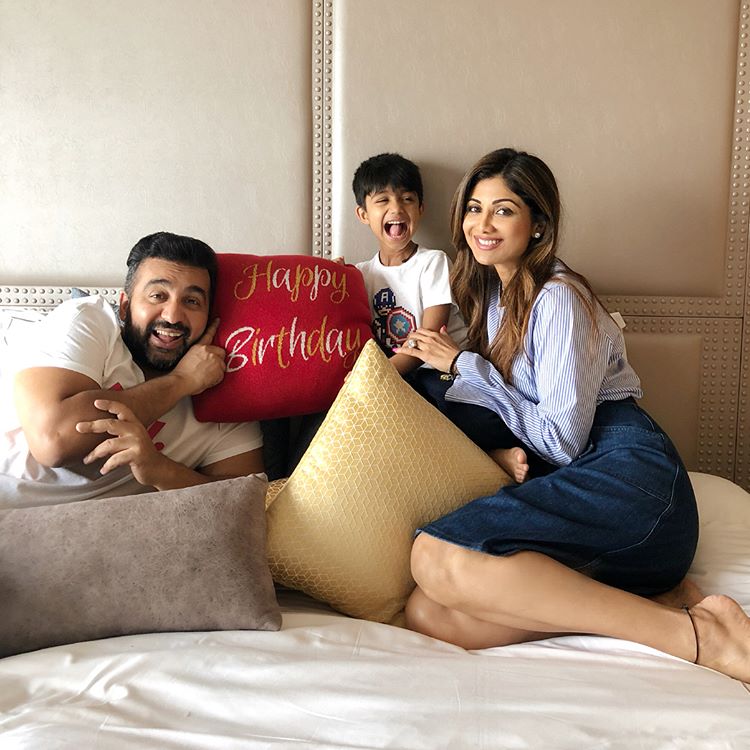 What do you think of Anurag Basu’s prank on Shilpa Shetty Kundra? Let us know!