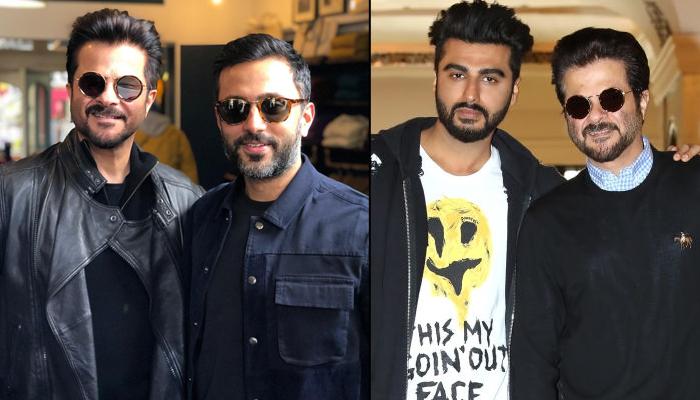 Every mid-week, sometime around late Wednesday or early Thursday, people start making plans for the weekend that are totally amazing and kickass! But reality has other plans for you and mostly you just end up ditching the ‘ideal weekend’ plans to sleep and recharge yourself over the weekend. This is what weekend is all about for ‘aam log’, but for our favourite B-town celebrities, Sunday means a brunch/lunch in Bastian or hanging out with their family or friends in the city. And Anil Kapoor with his damaad, Anand S Ahuja made sure to do their ‘Sunday right’! (Also Read: Taimur Ali Khan Shows Off His Boss Baby Side And We Wonder Why Little Tim Is Growing Up So Fast)

Anil Kapoor and his son-in-law, Anand S Ahuja stepped out for an all-men outing, and expressing a kind of brotherhood spirit, they both were twinning in a t-shirt and jacket look. While Anil looked dapper in a black leather jacket on a black t-shirt and completed the look with a dark pair of sunglasses, Anand too sported a dark blue jacket. Anil shared pictures from their ‘boys day out’ on his social media handles, and captioned it as, “Boys Day Out! Subtle, no? Calling myself one of the boys?! #sorrynotsorry #sundaydoneright”.

Anil Kapoor’s nephew, Arjun Kapoor had a banter over this post on Twitter as well as Instagram, and it was hilarious. On Instagram, Arjun commented on the photos, “What a guy used the youth and suced them dry!!”, to which Anil replied, “@arjunkapoor No no! I left some youth for you also Chachu! @arjunkapoor only because I love you”. On Twitter, giving a hilarious reaction to his chachu’s youthful picture and recalled a dialogue from their film, Mubarakan. He wrote on Twitter, “Baat youth mein rakhte hai...” Anil Kapoor’s daughter and Anand Ahuja’s wife, Sonam Kapoor Ahuja commented on to post, “Most handsome men in the world”. (Don't Miss: Anil Kapoor And Sunita Kapoor's Love Story Started With Prank Call, She Went Alone On The Honeymoon)

Sonam Kapoor Ahuja is a daddy’s little girl and she has found one gem of a person in her husband, Anand S Ahuja. The Kapoor clan loves the newest member of their family, and Anand too, reciprocates the love back by sharing lovely messages for them. On the success of Anil Kapoor’s film, Fanney Khan, Anand wrote a heartfelt message to congratulate his father-in-law. He had written, “One is nothing, one can do nothing, one can achieve nothing without working, dear. If you are poor, work. If you are rich, continue working. If you are burdened, dear, with seemingly unfair responsibilities, work.” (Also Read: Ranveer Singh And Deepika Padukone To Pair-Up For First Time For This Project Post-Wedding [Details])

Anand Ahuja’s post could be further read as, “Dear, if you are happy, keep right on working. Dear, idleness gives room for doubt and fear. Dear, of disappointment comes, please work. If your health is threatened, please work. Dear, when your faith and hope falters, work. Dear, when dreams are shattered and hope seems dead, please work. Dear, work as if your life were in peril. Dear, it really is. No matter what ails you, work. Dear, work with love, faith and patience. Work is the greatest remedy for mental and physical afflictions.” #SwamiRamBaba Wise words and favorite saying of the real life Fanney Khan @anilskapoor ... Always the hardest worker in the room, and that too with the biggest, most mischievous smile on his face! Congratulations on a job well done!”

Sometime back, in an interview with Hindustan Times, Anil Kapoor was asked how Anand S Ahuja is, as a son-in-law, Ek Ladki Ko Dekha Toh Aisa Laga actor replied, “He’s not my son-in-law, he’s like my son... I’d say friend. We bond over health, fitness and loving our parents and family. He’s very work-oriented, so we talk about that.” He further added, “Of course, there are things that I learned from him, since he has travelled so much, has studied in one of the best universities. These things I’m taking from him. He’s young, and comes up with great, fresh ideas where health is concerned. He has got a lot of depth and is very spiritual. It’s a combination of so many things we relate and connect to.” (Don't Miss: On Rhea's 31st Birthday, Anil Kapoor Remembers The One Mistake That He Committed On Her Birth)

In a throwback interview, Anil Kapoor had talked about his then would-be-son-in-law, Anand Ahuja and shared, “What father-in-law! From the very beginning, I made it clear to Anand that I was going to be his friend and not his father-in-law. The ice melted even before it was frozen. Anand has been a part of our family for a very long time. We are pals first, and relatives later.” (Also Read: Ranbir Kapoor's Romantic Birthday Gift For Alia Bhatt Is Making Boyfriends Across The World Look Bad)

Don’t they make for a perfect sasur-damaad jodi? Keep us posted!