Shahid Kapoor Says Mira Kapoor Is His Padmaavati, Reveals What Attracted Him Towards Her

Shahid Kapoor Says Mira Kapoor Is His Padmaavati, Reveals What Attracted Him Towards Her

When a baby is born, it instantly modifies the environment with his or her attractive giggles and innocent looks. And if it's a daughter, then it is sure that she will be daddy's little princess all her life. The Bollywood baby brigade has taken over the internet in no time. And one celeb baby who has created such an impact on her lucky parents is none other than Padmaavat actor, Shahid Kapoor and his queen Mira Kapoor’s sweetheart Misha Kapoor.

We recently told you about how a children's brand offered darling daughter Misha an ad but the doting father refuted the proposal. The concerned father, Shahid Kapoor considers it's too early to expose his daughter to the glam world and let her enter into acting. Recently, Shahid was asked one of the toughest questions by one of the leading tabloids, and his reply will make you share a laugh too. When asked whom will he choose between wife, Mira Kapoor and daughter, Misha Kapoor, this is what the actor was quoted as saying, “Please don’t make me choose between Misha and Mira, I have to go back home (laughs uncontrollably).”

He further added and retorted, “I can’t see beyond my daughter and I think my wife is slightly jealous. I keep teasing her that it’s karma, everything is coming full circle because that’s exactly how it is in her house. My mother-in-law keeps telling me how Mira is her daddy’s girl and she is the third spoke in the wheel. She is the apple of her dad’s eye; just the way Misha is mine. So, my wife has to live with it.” 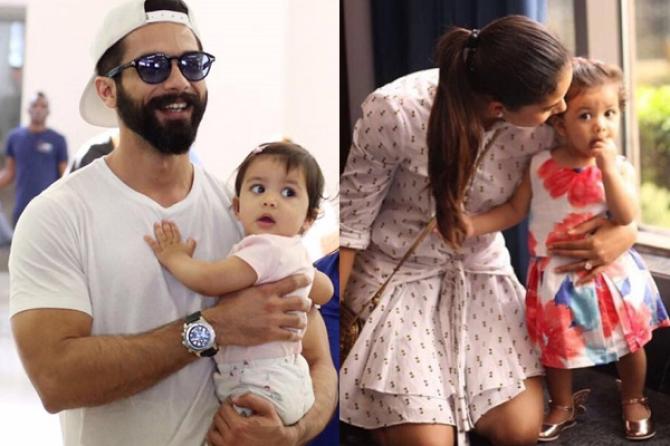 Isn't it a cute reply by daddy Shahid? When he was asked about his wife Mira and that one thing he really liked about her, the proud husband expressed his feelings for the love of his life and was quoted as saying, “Taking charge without being in your face is Mira’s natural personality. When I met Mira for the first time, one of the things that struck me about her is that she has a certain aura. She is individualistic and holds her own. When we had get-togethers and met huge stars from the fraternity, neither did she get intimidated nor was she awkward. Even at our wedding reception, there were so many big people. Just the way she conducted herself made me proud. She is so self-assured and graceful. She is humble yet confident. When I entered the industry, it took me years to get used to the ‘larger-than-lifeless’ of my surroundings. But Mira was different from the start.”

In another interview recently, Shahid was praising his wife Mira and gave her the credit for the endless support. He remarked, “I have a young wife, so I must keep fit. I have to keep up with Mira Rajput.” Talking about the success of his film Padmaavat, and the character of Maha Rawal Ratan Singh being played by him, he mentioned that being a married man in real life helped him play the ace character well. He was quoted as saying, “Padmaavat is the first time where I played a married man who is in a complex relationship. I don’t think I would have been able to play the character of Rawal Ratan Singh if I didn’t enjoy marital bliss."

He further added and said, “Our marriage has been a huge journey for Mira and me. The two of us come from very different backgrounds. And we went through our own struggle because she had a complicated pregnancy. It was then that we formed a bond and fell completely in love because we only had each other. Misha was our first big project together. Somewhere, subliminally all that I was facing in real life has played its part in Padmaavat." Shahid calls Mira his forever Padmaavati. On the same, Shahid exclaimed, “I do not think I would have been able to understand my on-screen relationship with my queen and the dynamic of that equation if I hadn’t been married for those one-and-a-half years. For me, Mira will always be my Padmavati.” Talking about how fatherhood has changed Shahid as a person, in an earlier interview, he said, “For the first time in my life, I don’t feel like leaving home to go to work (smiles). I used to hate staying at home. If I wasn’t working, I’d be at the gym, watching a movie or be out with friends, because I used to live alone and would feel lonely. Although I liked being on my own, there was too much of it. Now, I don’t feel like leaving home, and that’s a new feeling for me. I can spend the whole day at home with Misha and Mira, and that in itself is a day well spent. This thought never resonated with my personality before. So that’s a big change for me.”

We truly adore you both as a couple! And we cannot stop gushing over cute pics of Shahid Kapoor and Mira Kapoor along with their button-eyed munchkin, Misha Kapoor.