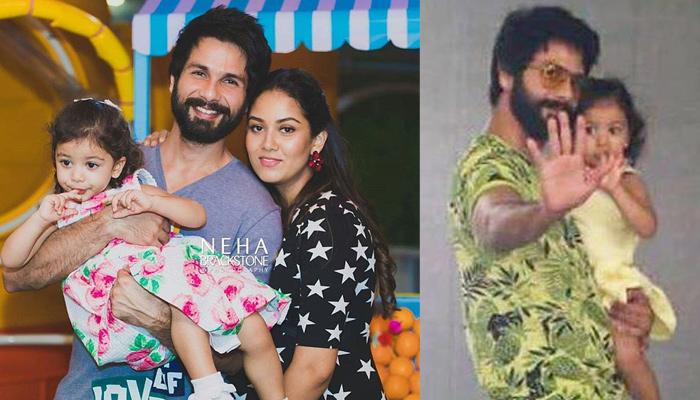 Tonnes of speculations, expectations and excitement were all gearing up since the beginning of September! Why? Shahid Kapoor and wifey, Mira Rajput Kapoor were expecting their second child and just like the couple themselves, fans couldn’t wait to know if Shahid’s first child, Misha will have a baby brother or a sister. And at late night yesterday, the world finally got to know! (Do Read: Shahid Kapoor And Mira Rajput Become Parents Again, Here Is Who All Wished Them From Bollywood)

Yesterday, September 6, 2018, the Kapoor household must have had a gala time as Mira Rajput Kapoor welcome her second child, a baby boy in their world. And ever since, people have been badly awaiting to catch a glimpse of the baby, or any update from the Kapoor clan on the arrival of a new star baby.

But hey! Here’s an interesting picture-cum-update for you. Mira is admitted to the Hinduja Hospital in Mumbai and her mommy, Bela Rajput, Shahid Kapoor’s mother Neelima Azeem and Ishaan Khatter were seen at the hospital. But guess who is spotted now? The doting daddy himself with the newbie ‘Big Sister’, Misha Kapoor. Shutterbugs clicked Shahid, with Misha cuddled in his arms, beaming with joy and waving at the camera. Checkout the picture and videos below:

Mira’s pregnancy was largely speculated earlier this year, when Mira was spotted sporting loose clothes with a slight baby bump. Putting an end to all speculations, Shahid Kapoor took to Instagram on April 20, 2018, and posted a beautiful picture of Misha, lying beside a blackboard, with chalked balloons which had the words 'Big Sister' written on it. Here’s the picture:

Speaking about Mira’s second pregnancy, Shahid had shared, “Yes, of course. I'm very happy. We just felt like sharing it with everybody. Mira said she wanted to put it out on Instagram and I thought the photograph was really cute. It was a spontaneous decision and it just happened." The second time newbie mommy, Mira too, had been extremely vocal in interviews quite a few times, that she would start her professional career once she has another baby. This is what the doting mom had said when asked about when she will begin her career, “Because I am going to have another baby, and then decide”. (Also Read: Shahid Kapoor Escorts His Pregnant Wife Mira Rajput Kapoor Safely To The Car After Their Dinner Date)

Shahid, too, supports his wife when it comes to decisions like these and had shared similar thinking during interviews. He once shared, “Mira, who is just 22, would prefer to have a second kid soon as well. She wants to flip the norm, get the kids to a certain age and then be free to do what she likes.” Mira took her pregnancy with quite a positive and joyful stride and kept on updating all her followers through her Instagram story ‘pregnancy diary’! Checkout some of the witty yet adorable Instagram stories that Mira had shared:

Mira had got into a controversy in 2017, when she shared that she doesn’t want to be a working mother.  She had then stated, “I love being at home, I love being a mother to my child, I wouldn’t have it any other way. I wouldn’t want to spend one hour a day with my child and rush off to work. Why did I have her? She is not a puppy, you know. I want to be there for her as a mother, seeing her grow up has, cannot be quantified.” (Don't Miss! Shahid Kapoor Holds Preggy Wife Mira Rajput Kapoor's Hands Tightly While Walking, Pure Husband Goals)

Absolutely Mira! Tonnes of congratulations to you and we can’t wait to catch a glimpse of the awesome-foursome cutesy Kapoor khaandaan!