While Shahid Kapoor is on a streak of sharing irresistible monochrome pictures of himself on his IG handle, just like us, his baby brother, Ishaan Khatter too, is impressed!

After making his debut with the film, Ishq Vishq, Shahid Kapoor was instantly given the tag of the 'chocolate boy' of the industry and made every girl Fida over his looks. Time and again, he has proved to be the most talented and celebrated mainstream Bollywood actor. At the time when the debate on nepotism in the industry is roaring high, it is difficult to convince that you are getting work because of your talent and merit, and not just because you are related to someone influential in the industry. Though Ishaan Khatter had entered the industry as Shahid’s brother, with his unconventional debut in the industry and acting skills, he had proved that he is much more than just a star brother and is here to stay! (Also Read: Mira Rajput Kapoor Flaunts Her Life's Motto Of Being 'Not A Regular But Cool Mom' To Misha And Zain)

Years ago, it was Shahid Kapoor, who had begged his mother, Neliima Azeem for a younger brother and when she was blessed with Ishaan Khatter, it was Shahid dancing with joy. Even the doctor had congratulated Shahid first on being blessed with his baby brother. Ishaan too, reciprocates the same love for Shahid and the respect he has for his elder brother is what we call sibling goals. A few weeks ago, Ishaan had posted a throwback childhood picture with Shahid wherein he could be seen siting on the lap of his big brother as he read the newspaper. Ishaan had written, "My pillar to lean on" atop it. Sharing another picture with Shahid from the stage of an award show, Ishaan had written, "Bhai, who has shown me by example the value of perseverance, hard work and patience" atop it. Ishaan Khatter makes sure to drop in love and witty comments on his brother, Shahid Kapoor and sister-in-law, Mira Rajput Kapoor’s Insta posts. While Shahid is on a streak of sharing irresistible monochrome pictures of himself on his IG handle, just like us, Ishaan too, is impressed! Shahid posted a black-and-white mirror selfie on his Instagram and captioned it as “So that’s what it feels like to be in front of a camera”. The picture left Ishaan impressed and he dropped a comment, “So that’s what it feels like to be ageless… thu thu” followed by an evil eye emoji. To which, Shahid replied, “@ishaankhatter did you just spit on me”. Ishaan clarified in his next comment, “@shahidkapoor with a mask”. When Shahid Kapoor had turned 39 on February 25, 2020, Ishaan Khatter had posted an array of pictures of his bade miya to wish him on his birthday. Ishaan had captioned the pictures as “OG Mere #bademiya Happy budddayyyy bhaijaaaaaaan.” To mark Shahid and Mira Rajput Kapoor’s fifth wedding anniversary on July 7, 2020, Ishaan had posted a five-star anniversary post for his bhaiya and bhabhi, where Shahid could be seen giving a sweet peck on Mira's forehead as they had posed in traditional outfits on the terrace of their residence. Ishaan had written, “Turned 5!” followed by a heart emoticon and five stars atop it. Mira had reposted the picture and revealed that Ishaan is the only one, who calls her 'bhabhi'. Mira had written, "@ishaankhatter the only one who calls me bhabhi". (Also Read: Mira Rajput Opens Up About Her Married Life With Shahid Kapoor And Acing The Role Of A Homemaker) 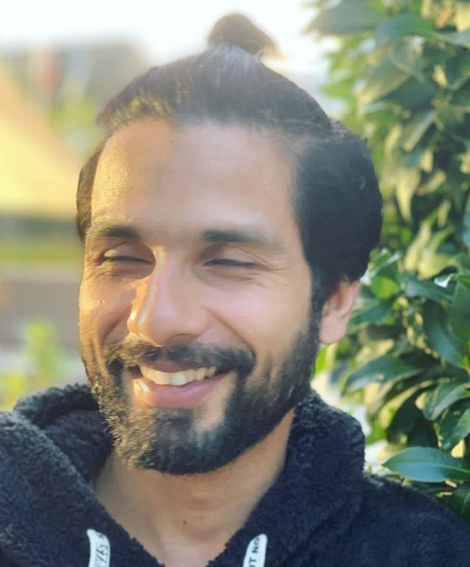 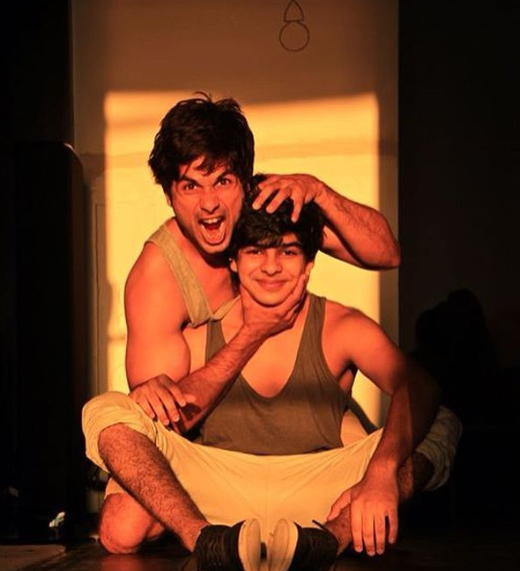 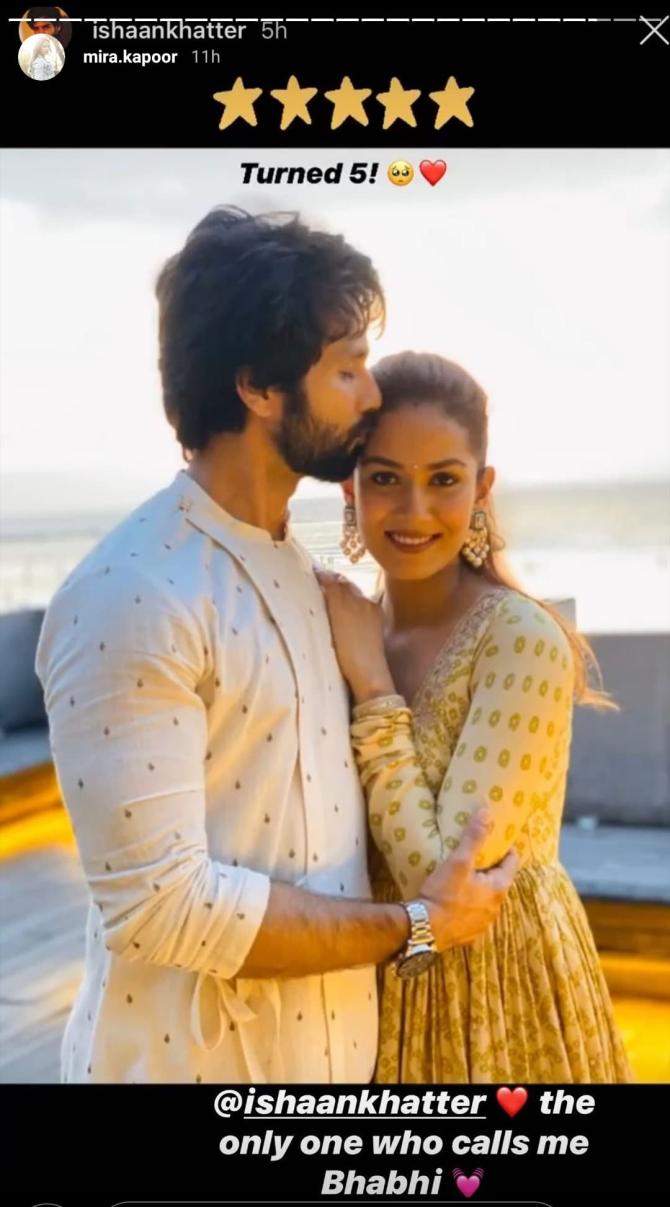 Ishaan Khatter has not only made the nation proud with his exceptional performances, but also the Kapoor clan is all-praises for the debutant! Ishaan’s brother, Shahid and sister-in-law, Mira Rajput Kapoor had taken to their Instagram handles and had posted a congratulatory note for the Beyond The Clouds star when he had taken the black lady (Filmfare Award for Best Male Debut) home. While Shahid had shared a still from the film, Beyond The Clouds and had tagged Ishaan followed by a clap emoji, Ishaan’s ‘bhabhidoll’, Mira had posted a photo of Ishaan holding the black lady. Mira had written, “Congratulations @ishaankhatter You make us so proud!” atop it.

Every milestone that Ishaan Khatter achieves or a new journey he steps on, he always has his family's back as they're there to cheer for him. For instance, when Ishaan had won the Star Debut of the Year – Male award at the 20th edition of the International Indian Film Academy (IIFA) Awards, his bhaiya and bhabhi, Shahid Kapoor and Mira Rajput Kapoor had posted Insta stories to express how proud they are of him. The award was even more special as Ishaan had received it from his big brother, Shahid. Posting the priceless moment on his Instagram feed, Ishaan’s one-word caption had spoken thousands of words. He had captioned his post as “Gratitude.” Shahid had reposted the same picture on his Insta story and had written, “Congratulations @ishaankhatter Proud” atop it. Ishaan's bhabhi, Mira too, had congratulated her 'little baby brother' for the award. (Also Read: Mira Rajput Kapoor Gives A Savage Reply To A Fan's Wish To Be Like Her Husband, Shahid Kapoor) 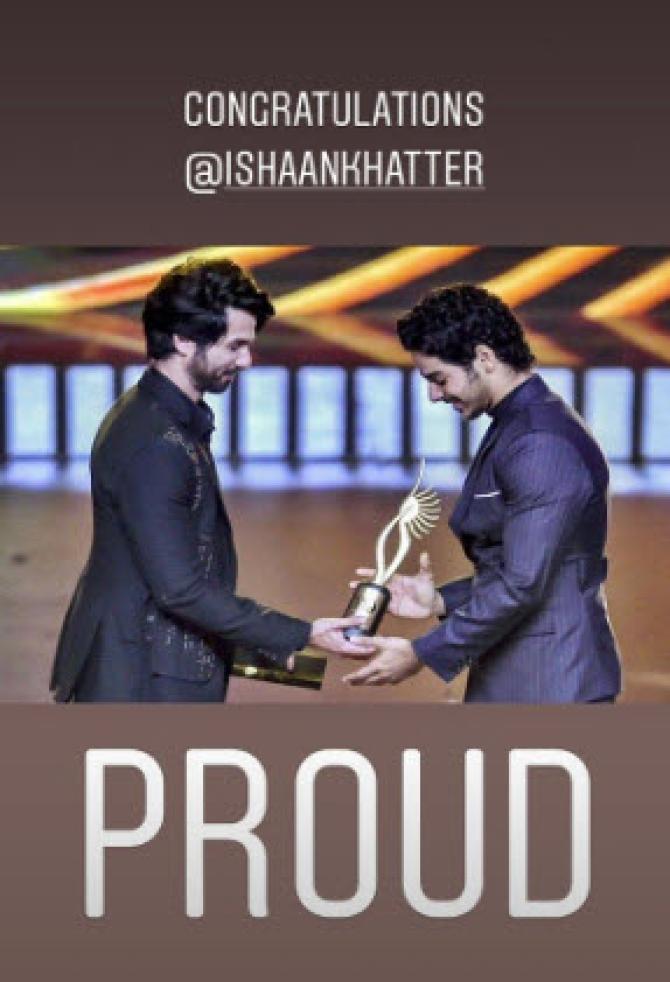 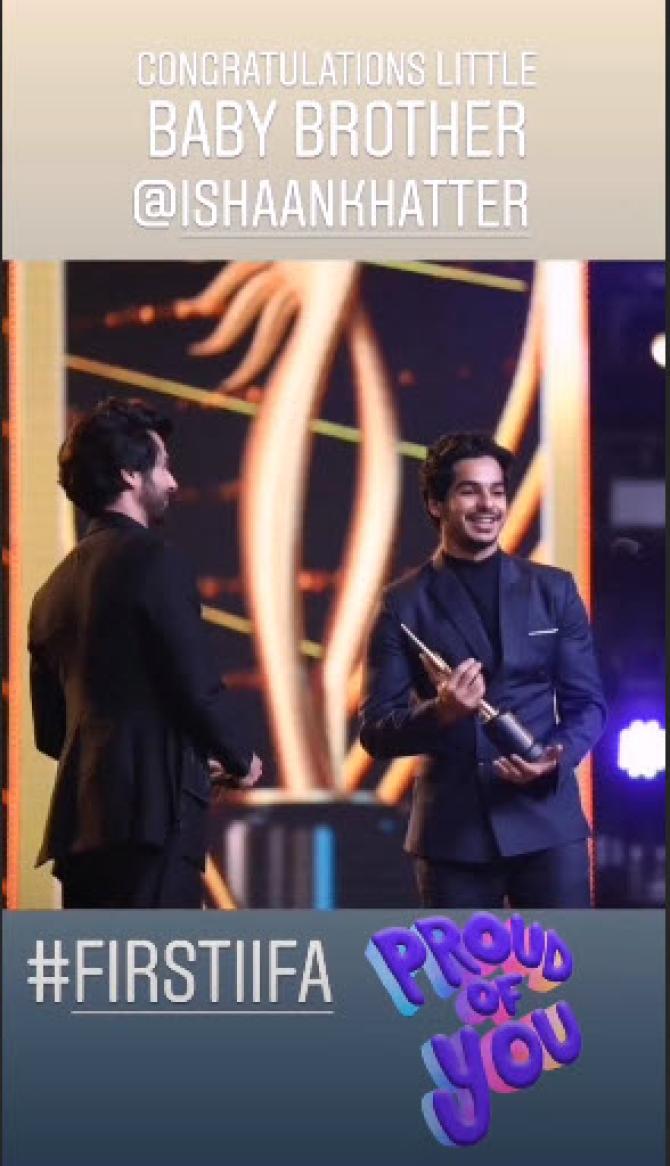 On the professional front, Shahid will soon start shooting for his film, Jersey while Ishaan is all set for the digital release of his movie, Khaali Peeli and is gearing up for Bhoot Police also starring Katrina Kaif and Siddhant Chaturvedi. Bollywood actor, Shahid Kapoor's massive fanbase is eagerly waiting for the release of his upcoming film, Jersey. Meanwhile, there are no doubts that his brother and actor, Ishaan Khatter has also engraved his status as one of the most promising youngsters in Bollywood industry. With two hit films, Dhadak and