Sara Ali Khan Reveals The Truth Behind The Reports Of Her Moving Out Of Mom, Amrita Singh's House

Sara Ali Khan Reveals The Truth Behind The Reports Of Her Moving Out Of Mom, Amrita Singh's House 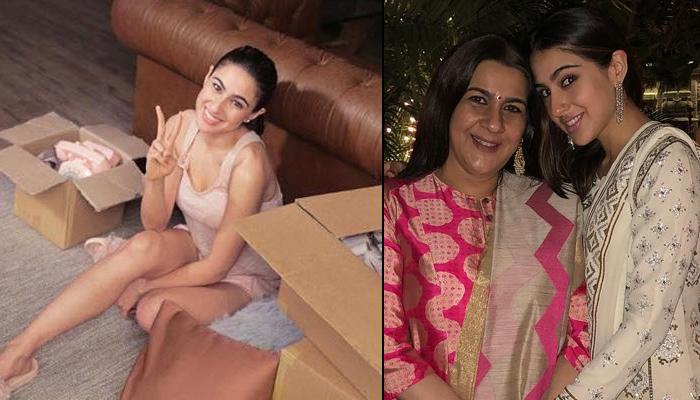 Following the league of Alia Bhatt, Ranbir Kapoor, Parineeti Chopra amongst other celeb kids, who took a step towards their independence and moved out of their parents’ house. The western tradition wherein the children leave their parental house to lead an independent life has been proliferating within our culture over these last few years. And Saif Ali Khan and Amrita Singh’s 25-year-old daughter, Sara Ali Khan seems to follow the trend like other celeb kids. (Also Read: Sonam Kapoor And Sunita Kapoor's Resemblance In Their Bridal Look Proves 'Like Mother Like Daughter')

On February 14, 2019, Sara Ali Khan shared a picture of her ‘new beginnings’, and captioned the picture from her new abode as, “Here’s to new beginnings!” followed by a lot of hearts. The speculations started to rise that Sara has moved out of her mother, Amrita Singh’s house after Sara was snapped stacking cartons of household items in the back of a car and she posted the following picture on her Instagram.

In an interview with Bombay Times at the Nykaa Femina Beauty Awards 2019, Sara Ali Khan clarified those rumours and revealed the truth behind the photo she had posted on her Instagram handle. However, it turns out that all the exercise has been just for the ad campaign. The Kedarnath debutante also said that she does not intend to stop irritating her mother anytime soon because she don't think she can live without her mother.

In a candid conversation on Famously Filmfare, Sara shared that in real-life her mom, Amrita is just like her on-screen character in the film, 2 States. She had said, "Okay, I love you, mom, but you have met her, right? You understand the whole behave yourself filter, Amrita Singh. It is the kind of the same problems as Sara. But Amrita Singh has no filters. Exactly! So, what is she going to say to me? For her, it is normal, right? I can say anything and chill. I get it from her." 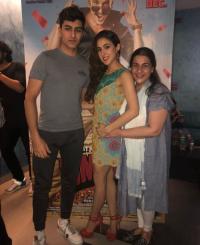 Sharing further that her mom ensures that as a star, Sara is mindful of what she speaks, the Simmba star stated, "The truth be told, the mother in her wakes up very often. Because suddenly with me, there is this, 'You can't do this.' I could have done it, but you can't do it. She also has a point. But she was incredibly cool for her time. To be honest, this is something she tells me very often. 'One could get away with a lot more back then, then you do now.' Mom could say something and get away with it because 5 people would laugh about it like twice a year. But now, it will be like, headlines. 'Says wrong thing!' See, I am being so good. I am not even giving an example of what it could be. But again and again, then everywhere there is this 'Says wrong things! Says wrong things!' You don't want that. You don't need that, I feel." (Also Read: Ranveer Singh Says 'Yeh Toh Meri Wali Hai' While Guessing His Wife Deepika Padukone's Name In A Game)

When asked if she will work with her mother, Sara had replied, "I don't think that she will work with me. I think my father might, but I don't think she will. Because she will be looking at me in a shot and be like eyebrow...dab.. because she is mom. So I think it will be the worst thing for her to work with me and probably the best thing for me to work with her. She won't do it." And along the similar lines, she talked about her father, Saif and said, “Especially because he is my father, it is no something that we can keep doing. I think it will have to be one special film."

In an interview with Bombay Times, Sara Ali Khan revealed the two roles of her mother’s that she’d want to play. She had said, “I don’t think I can do anything that mom has done. But if I ever have a chance to revisit a part that she has played, I would love to play her role in Chameli Ki Shaadi. I think she was brilliant. Her spontaneity and timing was brilliant. She was phenomenal in that role.” Sara continued, “I would also love to play her part if Aaina was remade. She won the award for the Best Supporting Actress. Although she wasn’t the leading lady, she was so damn powerful. It just proves that if you hold your own and keep doing what you believe is right, it will show.” (Also Read: Neeti Mohan Wore The Exactly Same Bridal Lehenga That Anushka Sharma Wore On Her Wedding Day?) 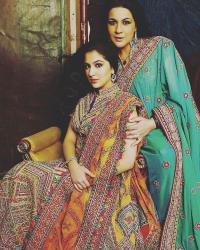 Sushant Singh Rajput’s sudden demise on June 14, 2020 had startled the nation, leading them to demand a CBI inquiry in his case. During the investigation, the focus of the case has completely shifted from ‘Sushant Singh Rajput’s Death Case’ to ‘Bollywood's Drugs Nexus’. It had all started with Rhea Chakraborty