Sonam K Ahuja shares a lovely relationship and bond with her family members. For the first time, she has shared screen space with her 'chachu', Sanjay Kapoor in the movie, 'The Zoya Factor'. Working in Bollywood has its own pros and cons and before entering the glam world one should be prepared to face all the hurdles. The constant media attention, long hours of shooting, busy promotional schedules, everything hampers the personal life of an actor. The Kapoor family is known for their unbreakable bond and lovely relationship that they share with each other. They love to spend some quality time together and are quite often spotted at various events.

Sonam K Ahuja entered the glam world and made her Bollywood debut in the year 2007 with the movie, Saawariya. Sonam has shared the screen space with her uncle, Sanjay Kapoor for the first time in the movie, The Zoya Factor. The much-awaited movie released this Friday (September 20, 2019) and has been receiving a lot of acclaims from the viewers and critics. We too, were eagerly waiting for the movie and most importantly, to see Sanjay playing the role of a father for his real-life niece, Sonam. (Recommended Read: Salman Khan Cheering For His Ex, Katrina Kaif At IIFA 2019 Awards Has Gone Viral, Checkout The Video) 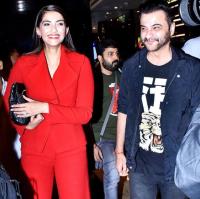 Sanjay Kapoor and Sonam K Ahuja share an amicable bond with one another off-screen. However, being in the glamour world, you don’t get much time to spend with your loved ones. During the shooting of the movie, The Zoya Factor, Sanjay and Sonam had gotten the chance to spend some quality time with each other. In an interview with the IANS, Sanjay opens up about working with his niece, Sonam. He said, “As an actor for me it is important to be part of a good story and "The Zoya Factor" is one such opportunity. Having said that, working with family members is always a good idea. Although we spend time when we have a family get-together, during the shooting of 'The Zoya Factor' I got a chance to spend quality time with Sonam." 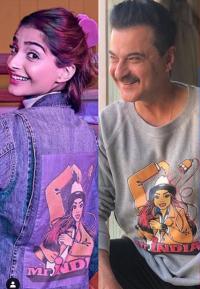 Sanjay Kapoor further talked about how their bonding deepened during the shoot of their movie and added, “We have seen her grow up before us and I think I spent the most quality time on the sets of this film because every day we are shooting for 13 hours. I think somewhere that bonding added a little more warmth to the on-screen father-daughter relationship." (Suggested Read: Kareena Kapoor And Saif Ali Khan Seal It With A Kiss On Her Birthday Bash, Check Pics And Video)

Sonam K Ahuja had tied the knot with her long-time beau, Anand S Ahuja on May 8, 2018. She was showered with lots of love and blessings from her friends and family members and the doting chachu, Sanjay Kapoor was not behind. Sanjay had taken to his Instagram handle and shared a throwback picture with Sonam from his wedding and had captioned the post as “20 years back when we danced at my wedding Sonam. Now I will be dancing at yours #timeflies.” And the doting niece had replied, “Love you.”

On May 8, 2019, Sonam K Ahuja and Anand S Ahuja had celebrated their first wedding anniversary and their Instagram handles were flooded with wishes. Anand had taken to his Instagram to wish his wifey, Sonam and had shared their ‘Shoefies’ and had captioned the post with a lovely note. The caption could be read as “Some of my favourite #shoefies w my (scroll to see our first one ever) ... I love posting these not because I love shoes (and you KNOW I love shoes) but because the idea of looking down reminds me to stay present, grounded and most importantly grateful! I could tell you exactly where we were and what we were feeling at the time I took these."

Sonam’s chachu, Sanjay Kapoor and chachi, Maheep Kapoor were not behind in wishing the head-over-heels in love couple, Sonam and Anand. Sanjay had shared an unseen picture from their sangeet night and had captioned it as “Happy anniversary family!!!!! I love you both more than hot sauce. #everydayphenomenal #hujas @sonamkapoor @anandahuja.”

Sanjay Kapoor’s wife, Maheep Kapoor too had taken to her Instagram handle and had shared an unseen picture from their wedding festivities and had written “Happy anniversary my cuties #CheersToYouTwo #Love&HappinessAlways xox.” (Must Read: Ranveer Singh Talks About His Wax Statue Placed Next To Deepika Padukone At Madame Tussauds)

How did you guys like Sanjay Kapoor and Sonam K Ahuja’s performance in the movie, ‘The Zoya Factor’? Do keep us posted.