Manish Raisinghan and his wife, Sangeita Chauhaan have shared some beautiful and candid unseen pictures from their wedding diaries. Take a look! In the ongoing lockdown, we have seen many couples tying the auspicious marital knot in intimate weddings with all the mandatory precautions. One such couple is popular show, Sasural Simar Ka fame, Manish Raisinghan and his fiancee and Ek Shringaar-Swabhiman fame, Sangeita Chauhaan, who had become the first couple to get married in the lockdown form the Hindi television industry. The couple had decided to have virtual mehendi and sangeet and had gone for a private Gurudwara wedding on June 30, 2020, with their close family members, relatives, and friends. (Recommended Read: Riddhima Kapoor Recreates Mom, Neetu and Dad, Rishi Kapoor's 'Twinning In Black' Picture With Mommy)

Well, the newly-wedded bride, Sangeita has started a new phase in her life, but the actress’ recent post on Instagram is a glimpse of the fun things that she’s going to miss after leaving her home. Also, the hilarious advice that her parents and brother had given to her during her vidai. Please scroll down to see her latest post! 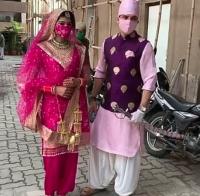 On July 3, 2020, television actress, Sangeita Chauhaan took to her Instagram handle and posted two selfies with her parents and brother. In the beautiful pictures, we can see her standing in her bridal outfit ahead of her vidai and posing with her family one last time before leaving her house for the next phase. Although it was an emotional moment for her, like any bride in the world, the actress has revealed a different side of this moment in the caption of these pictures. It can be read as “While leaving my home to start a new life when mummy papa said “Rona nahi hai” (do not cry) and @ankur_kchauhan said “Abe make up kharab ho jaayega” (u’ll spoil ur makeup) I realised where my strength comes from.” Take a look. 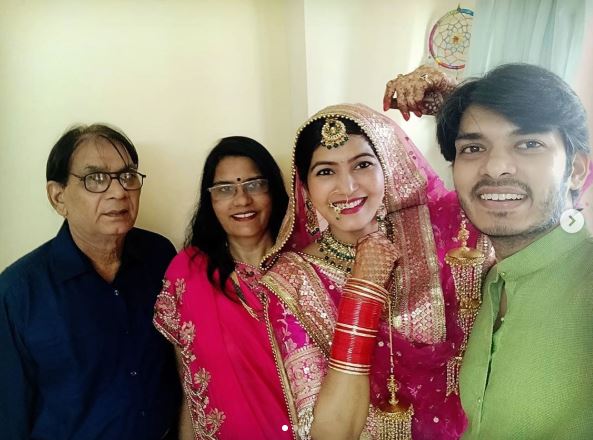 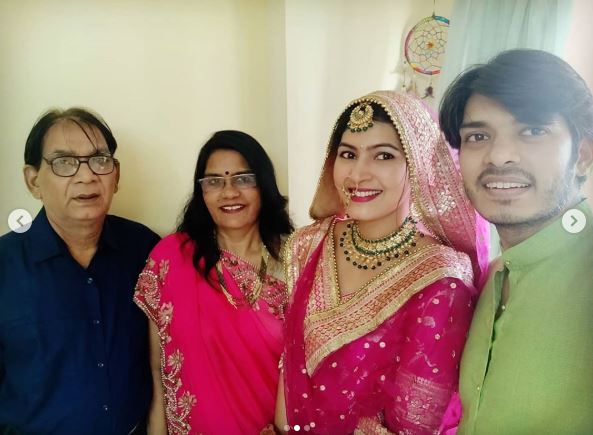 On the other side, Manish Raisinghan also took to his Instagram handle and posted some unseen candid pictures of him and wife, Sangeita Chauhaan from their wedding. Along with the pictures, he wrote a note thanking all the members of his family, his friends, and also his fans, who have blessed them with their warm wishes. His note can be read as "Just Married #sanman Thank you, everyone, for ur heartwarming wishes. Your beautiful blessings and all the love you all showered on us. Didn't get an opportunity to respond personally to all your messages but shall slowly and steadily cope up wid that...Thank you once again to one and all... love you all." The doting wife, Sangeita has also shared the same set of pictures on her Instagram handle with a beautiful note and it can be read as "Manisshhhh...Thank you for having me in your life.. I'm super Blessed and extremely Lucky to be your Wife..(please swipe to the fourth picture) Thank you for being the one I look up to and always being by my side.. Thank you for being my Support and Strength.. I Found You, I Found Myself.. I Love You..Thank you so much bhakti didi @bhakti_designer for these lovely colourful outfits." Take a look. 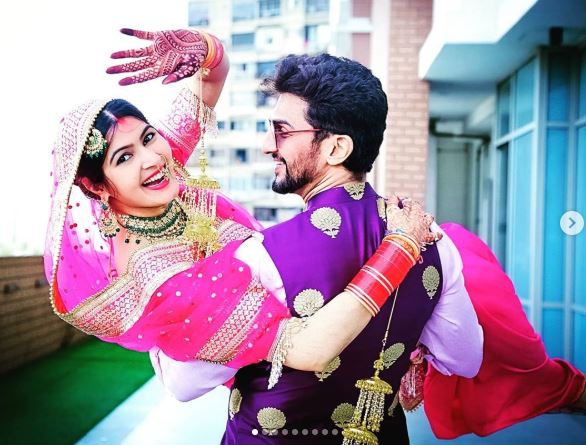 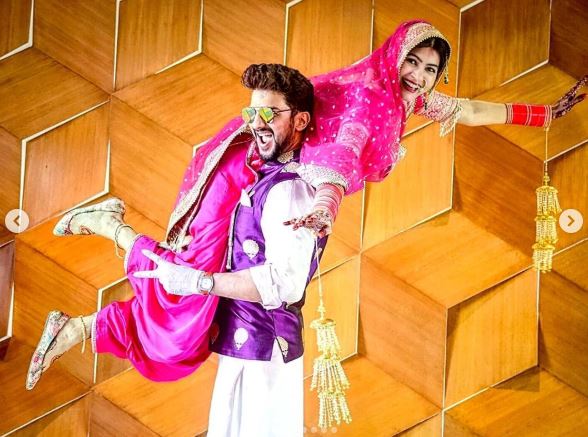 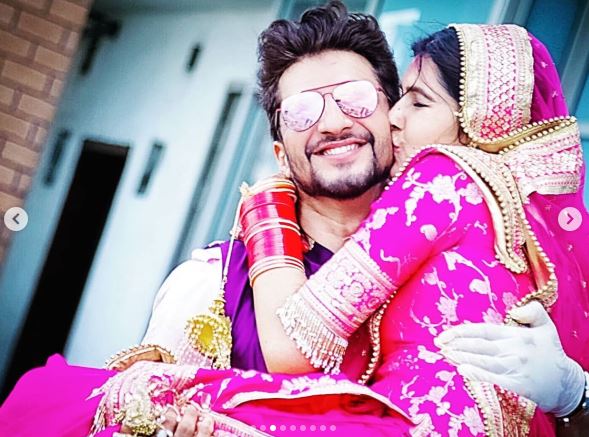 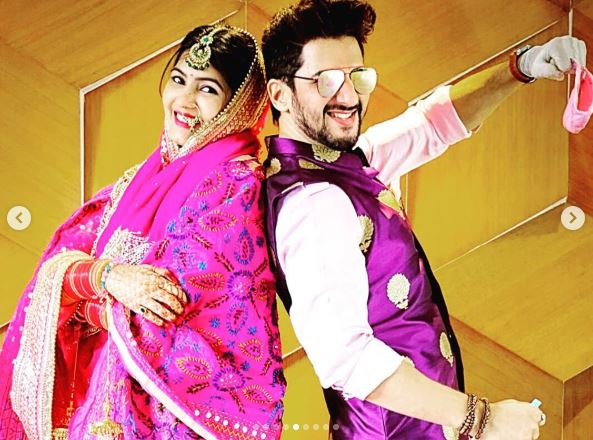 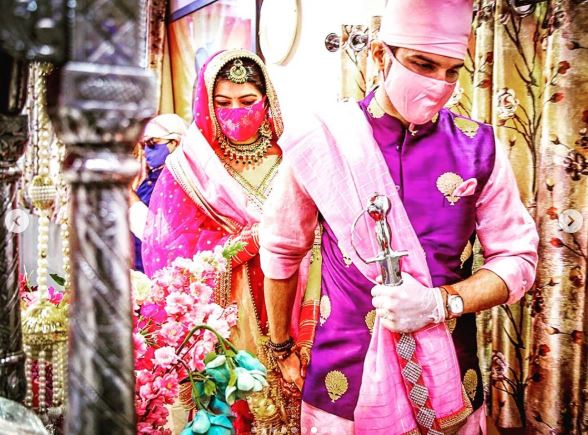 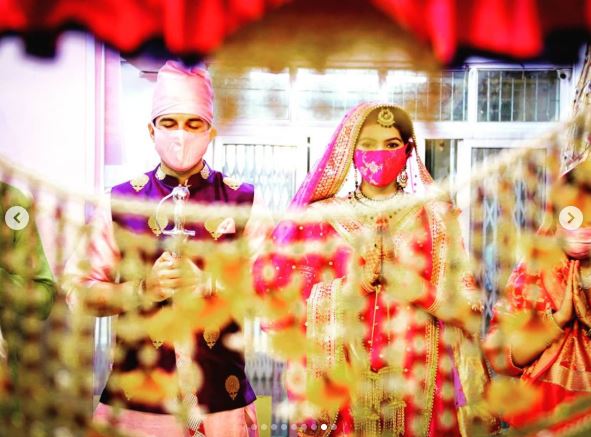 Talking about their marriage, then the couple, Manish Raisinghan and Sangeita Chauhaan had become husband and wife after taking chaar laava (four pheras) at a Gurudwara in Andheri, Mumbai. While the groom had looked dapper in a baby pink coloured kurta that he had teamed with a purple jacket and a matching face mask. The bride, Sangeita, had looked beautiful in a pink coloured suit with chooda and kalire accentuating her bridal look. Check out the video of the newly-married couple. (Don’t Miss: Mira Rajput Kapoor Posts Photo With Hubby, Shahid Kapoor, Shares Excitement For Wedding Anniversary)

There were a lot of fans, who were questioning and asking to know the reason behind the couple’s decision of marrying in the lockdown. And the newly-wedded groom, Manish Raisinghan, had revealed the reason behind this decision in an interview with SpotboyE. The actor had explained that it would surprise all of his fans and people, but it had started with a bit of casual, funny advice from his father, which had hit him hard. He had said, “It may surprise you, but the decision of getting married to each other was taken in a day’s time. During this whole lockdown, I was extremely busy with my song, and one day at the breakfast table, I told my father I am planning to take a day off today, and in a quirky way he said, ‘off le raha hai to shaadi bhi karle.’ It was a joke, but it hit my mind.” 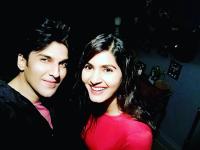 After which he had revealed that he had called his fiancee, Sangeita and had discussed the same and had convinced her for this unusual step. He had further added, “I instantly called Sangeita and said let’s get married, tell your parents to speak to my parents and she was shocked and said, ‘Achanak se kaise baat karu?’ Things don’t happen like this’, but I convinced her and said let’s make them meet on Zoom call today at 4, and she somehow agreed. They met via the video call and discussed things, and by evening the wedding date was also zeroed down.” (Also Read: Priyanka Chopra Jonas And Nick Jonas Are A Sight To Behold In This Intimate Picture For The Vogue) 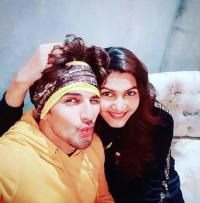 Do you find Sangeita’s parents and brother’s advice funny and valuable? Let us know!