Bollywood actor, Shahid Kapoor's wife, Mira Rajput Kapoor is super-excited for their upcoming wedding anniversary, and this picture is proof of it. Take a look!

Bollywood’s one of the most handsome, dashing, and a supremely talented actor, Shahid Kapoor had lost his heart to a Delhi-based college girl, Mira Rajput. But after seeing her pictures on the internet and her beautiful camaraderie with Shahid Kapoor, we were assured that they’re meant for each other. The pair had tied the nuptial knot on July 07, 2015, when the couple had their Gurudwara wedding and in the afternoon they had their jaimala and Hindu marriage. The pictures of their wedding are still crystal clear in the minds of their fans because of the way they had complimented each other on their big day. (Recommended Read: Tahira Kashyap Reminisces Mehendi Ceremony, Hubby Ayushmann Khurrana Is In Awe Of Her No Makeup Look)

Now, recently ahead of their 5th wedding anniversary, doting wife, Mira Rajput Kapoor has shared a lovely picture from their wedding and revealed that she can’t wait to celebrate their anniversary. Scroll down to see the beautiful picture and to relive those gorgeous moments once again!

Mira Rajput Kapoor's Day 13 Walk Is With 'Her Love' Zain Kapoor, She Shares A Cute Picture On July 2, 2020, Mira Rajput Kapoor took to her Instagram stories and posted a beautiful picture from her wedding with her hubby and Bollywood actor, Shahid Kapoor. In the photo, the charming groom, Shahid Kapoor, who had looked dashing in an ivory achkan with detailed work and churidar, designed by his friend Kunal Rawal. But, all the eyes were definitely on the bride, Mira, who had looked nothing less than a royal queen. Her outfit was designed by Anamika Khanna, who had chosen the lightest shade of pink adorned with silver and golden work for Mira Rajput. Atop of this beautiful picture, Mira wrote “5 Days to 5 Years.” Take a look. 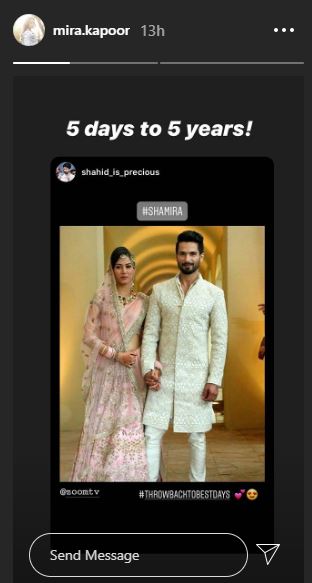 For the uninitiated, August 26, 2016, was the day when the beautiful couple had become proud parents for the first time to their baby girl, Misha Kapoor. After which, on September 5, 2018, Misha had gotten promoted to an elder sister’s place as they had welcomed a baby boy, whom they had lovingly named, Zain Kapoor. Ever since their marriage, both Shahid and Mira have been going strong and are giving us major couple goals through their commitments to each other. Talking about last year, on their 4th wedding anniversary, the star-wife had taken to her Instagram handle and had wished her superstar husband. Mira had shared a candid picture from their wedding with Shahid, and it had defined couple goals. She had captioned it as, “You make my world and me go round #happy4”. Take a look at it below: (Don’t Miss: Smriti Khanna Shares A Mesmerising Picture With Her Baby, Anayka, Reflects Beautifully On Life) In an interview with the Mid-Day before the birth of his and Mira’s second baby, Zain, Shahid had expressed his happiness and how the second time was completely different from the first time. The Kabir Singh actor had revealed, “It’s completely different this time. I think we are calmer and more relaxed. Mira and I would be asking questions and having doubts. But this time around, we feel like veterans. We have done it once so that we can handle it this time around.” Going further in the interview, when he was asked whether Misha understands what it means to have a younger sibling or not? Shahid had remarked, “With a two-year-old, you can’t tell them too much and at the same time, you can’t surprise them completely. So, we make subtle mentions because kids are absorbent. They learn from looking at things around. She is aware of the change without us having had a conversation with her.” (Also Read: Neena Gupta Enacts How She Talks To Hubby, Vivek Mehra In Sign Language As He's Always Busy On Phone)

Well, we all are excited to see how this couple will celebrate their 5th wedding anniversary! 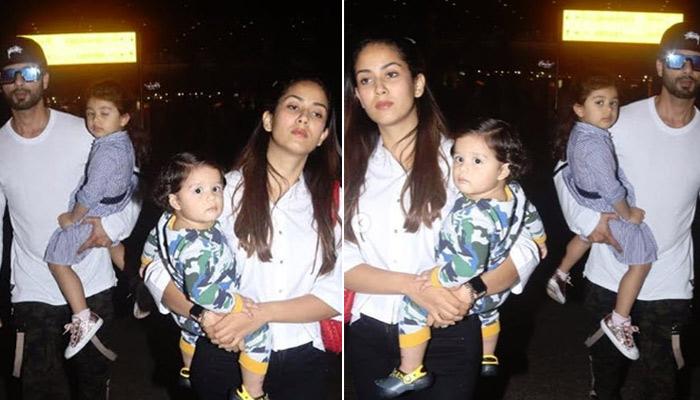 When a jodi is made in heaven, two people are bound to meet each other anyhow. One of the biggest examples to substantiate this point is the celebrity couple, Shahid Kapoor and Mira Rajput Kapoor. Who knew that the handsome hunk and chocolate boy of Bollywood would end up getting

Mira Rajput Kapoor's Day 13 Walk Is With 'Her Love' Zain Kapoor, She Shares A Cute Picture