Priyanka Chopra and Nick Jonas are one of the most sought-after couples of the glamour world. Recently, Priyanka shared a picture with Nick for Vogue and it just melted our hearts. Being a couple means not only sharing the ups but facing together all the downs as well. Being in love is definitely one of the best things in this world but more than that being with the right kind of person makes it even more special. And Bollywood’s gorgeous girl, Priyanka Chopra has proved it when she had tied the knot with American pop sensation, Nick Jonas from the Jonas brother’s band. Rumours of PeeCee dating the handsome singer had been doing the rounds since the two had been often spotted together but the pictures of her intimate roka ceremony had come as a sweet surprise to all her fans. (Also Read: Tahira Kashyap Reminisces Mehendi Ceremony, Hubby Ayushmann Khurrana Is In Awe Of Her No Makeup Look)

It was in the year 2016 when Nick Jonas had sent a direct message to Priyanka Chopra on Twitter and she had asked him to send her a text instead and the duo had exchanged numbers with each other. Before meeting at Met Gala 2017, Nick and Priyanka had met each other at the Vanity Fair Oscar’s after-party in 2017. It is said that at the end of the after-party, Nick and Priyanka were head-over-heels in love with each other. The much-in-love couple had tied the knot with each other on December 1-2, 2018 at Umaid Bhawan Palace in both Hindu as well as Christian weddings.

Recently, British Vogue magazine asked Nick Jonas and Priyanka Chopra to share an intimate snapshot of their life under lockdown to be published for their August 2020 issue. And on July 3, 2020, Priyanka shared the same picture on her IG handle and we couldn’t stop gushing over the adorable picture. In the picture, her hubby and in-house tutor, Nick was seen giving piano lessons to his doting wife and she, on the other hand, was seen obediently taking her lessons. One look at the picture will surely make you fall in love with them.

In an earlier conversation with the Vogue, Priyanka had spoken about how she had been spending her time during the lockdown. Talking about the same, she had revealed that she had started learning the piano and her hubby, Nick is the one teaching her the same. She had also revealed that she always wanted to learn an instrument and had asked Nick to give her a half-hour or 45-minute lesson every day. (Also Read: Smriti Khanna Shares A Mesmerising Picture With Her Baby, Anayka, Reflects Beautifully On Life)

During an interaction session on SiriusXM, Nick had opened up about giving piano lessons to his wife. Praising his wife, Priyanka being ‘very musical’, Nick had retorted, “She was signed as a recording artist in the US and in India. So she is very musical and she picked up very quickly. But I am not a very good teacher, I’ll admit that. I would love to learn how to best explain what is what because I learnt by ear so I had no sort of reference point.”

Priyanka and Nick are made for each other and have been giving serious relationship goals to the millennials. In an interview with the Harper Bazaar, Priyanka had talked about the reason behind dating Nick. She had revealed that it was his music video, Close, which had made her fall in love with him. Talking about the same, she had stated, “My life has always been pretty musical, and now with Nick, it's completely musical. I decided to date him after seeing the video for 'Close,' where his shirt comes off. So that song is my favorite." (Also Read: Neena Gupta Enacts How She Talks To Hubby, Vivek Mehra In Sign Language As He's Always Busy On Phone)

Aren’t Nick and Priyanka looking amazing together? What do you think about their picture? Let us know. 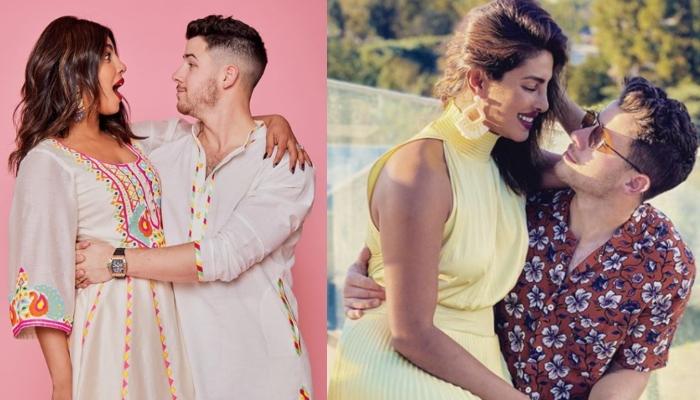 When the Desi Girl of Bollywood had decided to marry one of the most eligible bachelors, the handsome, Nick Jonas of the Jonas brothers’ band, we had waited with bated breaths to witness one of the biggest weddings of the year. Priyanka Chopra and Nick Jonas are the perfect examples of