Sameera Reddy shares an amazing bond with her mother-in-law, Manjiri Varde. On August 11, 2020, Sameera and her mom-in-law took a fun challenge and it was hilarious. A girl always wishes to get married to someone, who loves and respects her unconditionally. But the thought of leaving her parents and her own house bring jitters to her and all she prays is to be able to adjust in her new home. While many serials have portrayed in-laws, especially mothers-in-law in a bad light, some celebs have proved otherwise as they share a great bond with their in-laws. And Bollywood actress, Sameera Reddy is one of them, who shares a very warm bond with her saasu maa. (Also Read: Yuvika Chaudhary Shares A Picture Of Hubby Prince Narula With A Funny Filter As She Misses Him Badly)

Sameera Reddy, who had married businessman, Akshai Varde shares a great rapport with her mother-in-law, Manjri Varde. Sameera, who is a doting mother to two munchkins had embraced motherhood for the first time on May 14, 2015, when she had welcomed her baby boy, Hans Varde. On July 12, 2019, Sameera had become a mother for the second time as she had welcomed a little princess and had named her, Nyra. A darling wife, a caring mother, and a doting daughter-in-law, Sameera is an inspiration to all the mommies.

Sameera Reddy and her mother-in-law always give glimpses of their ‘messy mama’ and ‘sassy saasu’ avatars. From cooking together to celebrating all important events, the duo always has each other’s back and are an inspiration to millennials. On August 11, 2020, Sameera took to her IG handle and shared a video where Sameera and her saasu maa took a fun challenge an answered a bunch of hilarious questions. While the two were at their witty best, Sameera’s mother-in-law won the challenge hands down and proved that she is the sassiest saasu. Alon with the video, Sameera wrote, “Wife or Mother? Who does Akshai listen to?”

Sameera Reddy’s mother-in-law, Manjri Varde is one of the coolest saasu maas. On March 11, 2020, Sameera had taken to her Instagram handle and had shared pictures and video of 'flip the switch' challenge with her mother-in-law and had given a glimpse on how she had stolen her thunder. She had captioned the pictures and video as “When your mother in law steals your thunder. @manjrivarde you were epic! She #flippedtheswitch thank you for being as crazy as I am. Please Try this at home and tag us !! @oh__happy__family thank you for pushing us to do this!"

In a special JioSaavan podcast on Raising Parents, Sameera was invited and she had talked about the expectations and pressures that a lot of young parents face after entering into parenthood. She had discussed the challenges of parenting the 2020 generation and had retorted, “Parenting is not an easy journey with the 2020 generation. It’s the only role you play with no script in place. Right from getting your child to sleep through the night, to equal parenting, to raising a picky eater, body shaming, to rediscovering yourself after motherhood is all exhausting and few speak about it.” (Also Read: Suresh Raina Gets His Wife, Priyanka And His Kids, Gracia And Rio's Names Tattooed On His Hands) 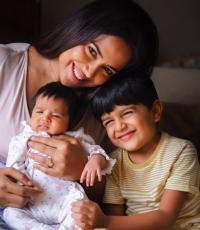 On May 2, 2020, Sameera had taken to her Instagram handle and had shared a funny video of their 'Sassy Saasu' and Messy Mama lockdown series. In the video, she had showed how before the lockdown she had lived a diva’s life and hadn’t done any household work. But the scenario had changed during the lockdown and she was doing everything from cleaning to cooking whereas, her mother-in-law is chilling. Along with the video, she had written, “Saas-Bahu Before/during LOCKDOWN. I ain’t your mama Mr. Vardenchi starring @manjrivarde aka Sassy Saasu & Messy Mama…ain’t your mama.” (Also Read: SSR's Father, KK Singh Had Tried To Contact Him Via Rhea And Shruti Modi, Reveals The WhatsApp Chat)

Don’t you also think that Sameera’s mother-in-law is the coolest? Let us know.