Suresh Raina has raised the bar of a 'perfect family man' a little too high by getting his wife, and kids' names tattoed. Scroll down to know more! 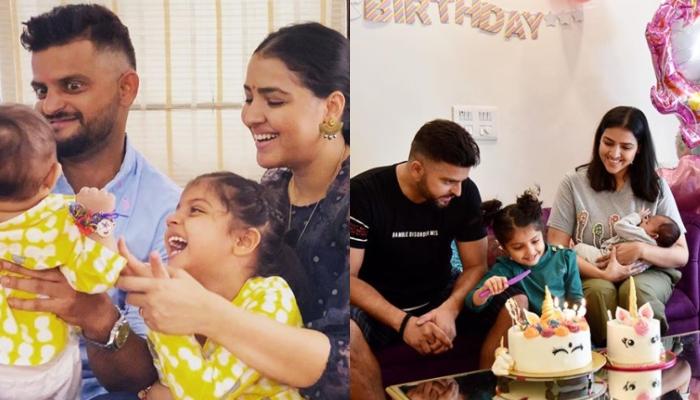 The families of the cricketer, Suresh Raina and his wife, Priyanka Chaudhary Raina were quite close to each other and had decided to turn their friendship into a beautiful relationship, and that is how Suresh had found his soulmate in Priyanka. Suresh and Priyanka had tied the knot and had become each other's forever on April 3, 2015. After a year, the lovely couple had embraced parenthood and had welcomed a little angel into their lives, whom they had lovingly named Gracia Raina. And their family of three had turned into four with the arrival of their baby boy, Rio on March 23, 2020. (Recommended Read: Sushant Singh Rajput Wanted To Sneak Into The Class With Niece, Mallika Singh To Study Astronomy)

Suresh Raina has transformed into this dedicated family man, who never shies away from showering love and compassion for his family and loved ones. And ever since he had embraced fatherhood, the evident presence of his kids, Gracia and Rio on his social media handle and his conversations in his interviews. Now, he has gone further and raised the bar a little too high by getting his wife, and kids' names tattoed. Scroll down to know more!

Ace cricketer and the backbone of the Indian batting order, Suresh Raina got inked yesterday with names of his wife, Priyanka Chaudhary Raina, and his kids, little Gracia Raina and baby boy, Rio Raina. The internet is swooning over his adorable gesture for his loved ones! Raina posted pictures and videos form his inking session on his IG handle with the caption, "They give me a reason to live", followed by a heart emoticon. Check out the pictures and videos below:

On May 4, 2020, Suresh Raina had posted a lovely family picture of himself with his wife, Priyanka Raina, little Gracia Raina and the new member of their family, little baby boy, Rio Raina his Instagram handle. They had looked as if they were sweating out in the gym, just before the picture was taken. Little Gracia could be seen sitting on daddy's lap, while baby Rio was cuddled in the arms of his Mommy, Priyanka. Raina had captioned the picture as "Happy & healthy parents, raise happy & healthy children. Lockdown has taught us various ways to strengthen the bond & love each other in unusual ways. #familyiseverything #loveyourfamily #saynotodomesticviolence #saynotochildabuse @priyankacraina @rainagracia #RioRaina."

Since Rio's birth, the doting daddy doesn't leave any opportunity to spend time with his little fellow. On July 22, 2020, Raina had given a glimpse of the same when he had taken to his IG handle and had shared a video with Rio. In the video, Suresh was seen playing with Rio, who, in turn, had responded to his daddy. Along with the video, he had written, "My favourite thing to do these days. He is so talkative already! #Rio." (Also Read: Sara Ali Khan And Ibrahim Ali Khan Cycling In The Rains During Monsoon Is Every Brother-Sister Ever)

Some days ago, Suresh Raina was spotted enjoying Delhi Rains with his wife, Priyanka Chaudhary Raina and his little girl, Gracia Raina. Suresh Raina was in Ghaziabad some few days ago, participating in the practice sessions, since IPL is scheduled to start from the last week of September. The doing daddy had taken some time out of practice and had taken his little princess, Gracia along with his wife, Priyanka for a drive in the city. And Delhi had welcomed him with showers! Raina had posted the video of his gala family time his IG handle, enjoying the rain with the caption, "Taking my little girl for a drive! She is so in love with the rains. #DelhiRains." (Don't Miss: Ira Khan Enjoys Her Father, Aamir Khan's 19-Year-Old Peppy Song, Focuses On One Particular Detail)

Do you also wish to get your loved ones' names tattooed? Suresh Raina is one of the most loved cricketers in India, courtesy to his 'Mr Dependable' tag and grounded nature. Cricket is not just a sport, but a religion in India and that is why the popularity of cricketers amongst cricket fanatics reaches another level. Be it their performances or