There is no bigger miracle than the miracle of giving life! And Bollywood actress, Sameera Reddy is all set to experience this magic for the second time. Checkout pictures of her adorable baby shower! 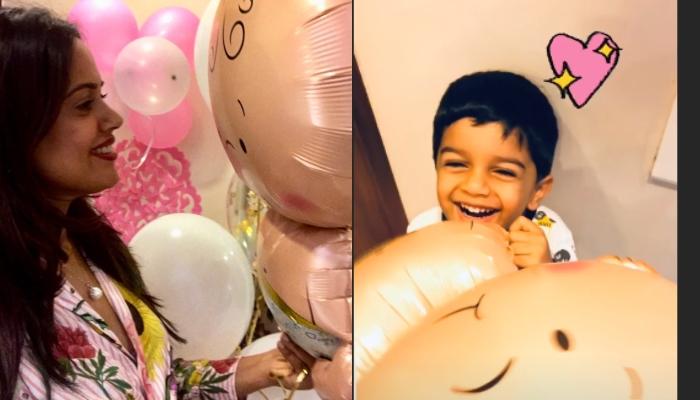 A baby is a blessing and a little bit of heaven sent down on earth! While being a mother is a magical process, the nine-month journey is a rollercoaster ride with a volcano of emotions. However, with the help of your friends and family, you can smoothly sail through it. And Bollywood actress, Sameera Reddy is all set to welcome her second baby. (Recommend Read: Deepika Padukone Talks About Becoming Mother And Pressure Women Face When It's About Pregnancy)

Sameera, who is enjoying her last trimester, had confirmed the news of her second pregnancy with SpotboyE. She had stated, “Gosh! How did you know? I have not told a soul yet. But now that you have called, yes, let me tell you the truth that I’m carrying for the second time. I’m four months pregnant. This is a planned baby. It is one of the reasons why I have refused quite a bit of work in the recent past. Akshai and I wanted to have the second baby in 2019. My due date is in July.”

On April 13, 2019, Sameera’s family and friends organised a pink snowflake themed baby shower ceremony. The actress shared pictures of the same on her Instagram handle. The baby shower was filled with balloons, laughter, gifts and of course, Sameera’s son, Hans Varde, who cannot wait to become the bhaiya of the house. Take a look at the inside pictures below:

Sameera is making most of her maternity fashion and it can clearly be seen in her pictures on Instagram. The actress had talked about the same, and had shared, “In my first pregnancy, I was very shy and thought about a lot of things but now I feel it's very different. I remember I used to cover up a lot during the first pregnancy now I'm like bring it on. I can also be hot when I'm pregnant. So it's just a matter of mindset.” (Also Read: Splitsvilla 10 Winner Baseer Ali Is Single Again After Dating Mystery Girl? Shares Cryptic Message)

Sadly, the actress was trolled brutally for flaunting her baby bump at the GQ Style Awards on March 31, 2019. However, Sameera gave a befitting reply to all the trollers, and had stated, “I want to ask trollers: 'Was your mom hot, when you came out?' It's shameful. Pregnancy is such a natural process. It's so beautiful. It took me time to (lose weight) with the first baby. Maybe it'll take me time with the second baby. But what's most important is to embrace yourself. And to all trolls: 'Say what you want guys, I think I have a superpower, I'm giving birth to a baby.”

In another interview, she had talked about how the second pregnancy made her feel beautiful from the inside, and had revealed, “This time around, the pregnancy has been a lot easier on me. It’s joyous and I feel sexy about myself. I am so happy to be out there. This should be the way to deal with such a beautiful phase of your life. That’s why I decided to step out and flaunt my bump.” (You May Also Like: Rare Throwback Picture Of Salman Khan And Aishwarya Rai Happily Posing Will Take You Back To The 90s)

She had further added, “The difference is that people are more accepting of these things now. Kareena and Neha have stepped out and done whatever they wanted to do when they were carrying their babies and people appreciated it. But, whenever society shames new moms for their weight, it makes me upset.” (Don't Miss: Karisma Kapoor's Ex-Husband Sunjay Kapur's Wife Priya Sachdev Wishes Him On Second Anniversary)