Be it the innocence of Prem in Maine Pyar Kiya, Andaz Apna Apna, Hum Aapke Hain Koun…!, Hum Saath-Saath Hain or his 'Dabangg' brawn and magnetic personality in Wanted, Tiger Zinda Hai, Kick, Jai Ho and many others, Salman Khan has come a long way in his professional journey. In a career span of almost three decades, Salman has emerged as one of the most precious superstars in B-town with an indomitable command on his fan-following. (Also Read: Karan Johar Reveals Whom Is Salman Khan Going To Marry In 2019 On Neha Dhupia's Show No Filter Neha)

On December 26, 2018, Salman Khan turned 53 and he threw a grand party at the family farmhouse in Panvel. Salman celebrated his birthday in style with his close friends and family. Having his 2-year-old nephew Ahil Sharma, son of Arpita Khan Sharma and Aayush Sharma, by his side while cutting the huge birthday cake, the evening was indeed a special one.

In a video that went viral on social media from the intimate birthday celebrations of Salman Khan, he can be seen cutting his birthday cake with Ahil, while his rumoured girlfriend, Iulia Vantur sings the birthday song. Here are the pictures and video from the night:

Salman Khan’s Maine Pyaar Kyun Kiya co-star, Sushmita Sen shared a video with the birthday boy on her Instagram handle and wrote a heartfelt wish for him. She captioned it, ““Whenever life gives us a chance to sit it out or dance...WE DANCE” The journey from falling in love with #Prem on screen in Maine Pyar kiya #1989 to sharing the screen with him in Maine Pyaar Kyun Kiya #2005 what a destined journey indeed!!! Happy Birthday to a man who never stopped celebrating ‘Being Human’ Have a blessed year @beingsalmankhan Know that I will ALWAYS love you!!! #friendforlife #happybirthday #duggadugga mmuuuaaah!!!” (Also Read: Salman Khan, Sohail Khan, Arbaaz Khan Dance Together At Nephew Ahil Sharma's Christmas Party)

Mouni Roy, who looked gorgeous in a short metallic number paired with knee-length boots and a black jacket, shared a birthday wish for Salman along with the pictures from the night on her Instagram handle. She wrote, “He s rid of thoughts & words of other people, has his own voice; his own language. Happy happiest birthday @beingsalmankhan; am a fangirl for life! Wish you all the happiness & love you bring into everybody’s lives. Also, laughter & food were the main ingredients of the evening amongst lots of dancing.” Salman Khan has turned 53 and his fans are eagerly waiting for the superstar to settle down in life and get married. But in a throwback interview with a leading tabloid, Salman talked about his marriage plans and said, "Wo mere paas uska koi jawab nahi hai, mujhe iss baat se bahut khushi hoti hai ki bahut sare logo ko meri shaadi ki chinta hai, pareshani hai, lekin mujhe hairat yeh hoti hai ke meri shaadi se inka kya faayda hoga. Toh aisa koi jawab hai hi nahi, haan ka bhi nahi, naa ka bhi nahi, maybe ka bhi nahi, lekin jis waqt hogi, hogi, nahi hogi toh nahi hogi. Main bahut khush hoon, main bahut zyaada khush hoon (I am happy about the fact that people are concerned about my wedding, but it makes me wonder what good will it to do to people who are so concerned about my marriage. I don’t have an answer, neither yes, no or maybe. If it happens, it happens. If it doesn’t, then it doesn’t. I am very happy, very very happy. Seriously)!” But Salman has shown his interest in embracing fatherhood through surrogacy. In an interview with The Times Of India in 2017, he was quoted as saying, “I do want to have a child, but with child, the mother comes. And when the mother comes, big complications happen as I am not the husband material. I am the father type. It will be unfair for anyone to think that I will change him. I will not change. I sometimes feel surrogate type ka ho jaye, but then look how close we are to our mothers so when the kid grows up he or she will ask maa kaun? They will then think that my father for his own selfish reasons has kept us without a mother. And then my parents too would like to see my children. So it’s all very complex.” (Also Read: Salman Khan Confesses That Dad Salim Khan Allowed Him To Bring His Girlfriends Home, On 'Dus Ka Dum') 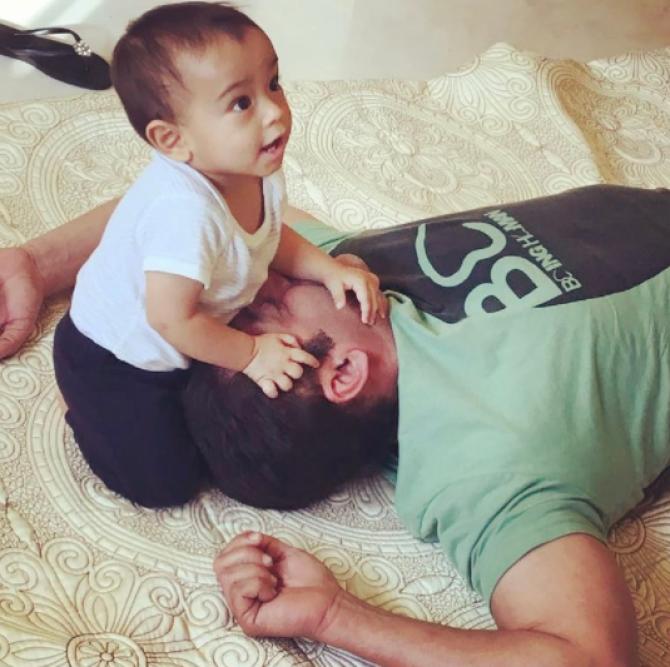