'Jawani Janeman' actor, Saif Ali Khan was asked about going for clubbing along with Taimur Ali Khan and younger son, Ibrahim Ali Khan and his reply will leave you to roll in the aisles. We have seen a lot of incredible actors over the decades in Bollywood. However, every single of them had something unique in their acting style. Some actors are born to play romantic roles, whereas some are born to be villainous characters. Nevertheless, the most exceptional actors are the ones who know how to shine in both negative and positive roles. The list with the names of these extraordinary stars is a long one, some of the most notable names from this list include the likes of Rajesh Khanna, Sanjeev Kapoor, Amjad Khan, Amitabh Bachchan, Om Puri, Nana Patekar, Irfan Khan, Anupam Kher, Aamir Khan, Ajay Devgan, Naseeruddin Shah, and the list goes on. Well, there’s one more name that deserves a mention in this remarkable list and that is, Saif Ali Khan. (Recommended Read: Himanshi Khurana Reveals How Shehnaaz Ruined Her Love Life And How Channel Showed Her As A Villain)

The son of Bollywood’s one of the finest actresses, Sharmila Tagore and Cricketer, Mansoor Ali Khan Pataudi, Saif Ali Khan is known for doing versatile roles. Some of his notable characters include Sameer from Dil Chahata Hai, Shekar Roy from Parineeta, Langda Tyagi from Omkara, Bullet Raja from Bullet Raja, Boris from Go Goa Gone, Sartaj Singh from Sacred Games, Naga Sadhu from Laal Kaptan, and many more. Recently the trailer of his forthcoming film, Jawani Janeman was dropped and seeing the trailer, everyone fell in love with Saif’s charm all over again, as he’s back in his trademark flirty and romantic version. However, Saif Ali Khan is also famous for his witty replies during media interactions and events. 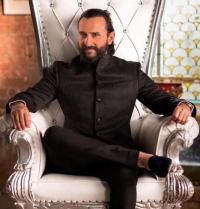 Currently, Saif is busy in promoting his upcoming film, Jawani Janeman and during the song launch of the same, he was asked an intriguing question by a media correspondent, as to what will he do if he goes clubbing with his two sons, Taimur Ali Khan and Ibrahim Ali Khan. Saif promptly answered the question in his trademark witty style saying that, “Taimur and I often go to the same club and we often like the same girl but then I pick him up and send him home. Ibrahim is a bit bigger than me so I don’t know if I can do that.” Woooah! What a witty reply from Saif, who knows where were we busy, when God was distributing humour to humans. (Also Read: Akanksha Puri Talks About Her Beau Paras Chhabra Getting Intimate With Mahira Sharma Inside BB House)

It’s hard to digest the bitter and harsh truth that our beloved Saif Ali Khan is on the edge of turning 50. However, the actor seems to be quite comfortable as he had added to the same media statement that, “I’ll leave girls & pubs to Ibrahim and will probably stay at home & read to Taimur, I am an old man now just pretending to be cool.” It’s not a secret that Saif loves his children whole-heartedly but holds a special corner for his youngest son, Taimur Ali Khan. In an interview with DNA, Saif had revealed the way he spends time with his little Tim “Taimur wakes up at 7.30 a.m. I am up by 9 am. He comes, takes the torch by my bed and puts it in his mouth like the doctor. He keeps doing things like that. He likes to see the moon, which is nice. He watches it before he goes to sleep every day. He loves nature and is quite outdoorsy. He imitates us doing yoga by making some painful noises which obviously, I’m making while I’m stretching. He does a good side bend and falls over.” 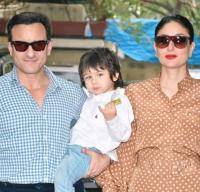 On the other side, Saif is also concerned about his elder son, Ibrahim Ali Khan’s future too. The actor doesn’t want to push his son to have a career in Bollywood, but if one day he wants to be an actor, then he should do it without using his father’s name. In an interview with News18, Saif had talked about the uncanny resemblance with his son and how Ibrahim guides him in some situations, “There are scenarios where people, whether it’s an old relative, my mother or a family friend tell me, ‘Oh my god, you’re just like him (Saif) and he does that too!’ I guess maybe we are similar but I wouldn’t know that. But, regardless, he is special to me. He is also my guide when it comes to man-to-man conversations.” (Don't Miss: Bigg Boss 13: Arti Singh Reunites With Brother, Krushna Abhishek After Molestation Confession) 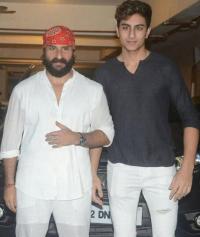 Saif Ali Khan’s Jawani Janeman is going to hit theatres very soon. We wish him all the best for his future endeavours.