Sachin Tendulkar shares a warm bond with his kids, Sara and Arjun. He recently shared some pictures from his vacation and we couldn’t help but notice Arjun’s striking resemblance with his daddy.

For a son, his father is always his first hero, whom he had idolised throughout his growing years. From the first bicycle ride to the important career decision, a father’s role in shaping his children’s future is pivotal. He is always there to guide and protect his children throughout their lives and one such relationship is shared between Sachin Tendulkar and his kids, Sara Tendulkar and Arjun Tendulkar. Both the kids have opted for their parent’s profession as Sara had followed her mother’s footsteps by choosing medicine as her profession, whereas, Arjun has taken cricket as his profession. (Also Read: Shilpa Shetty Twins In Black With Hubby Raj Kundra For Dinner Date, Riteish-Genelia Deshmukh Join In)

Tagged as the ‘God of Cricket’, Sachin enjoys a huge fanbase. He had started his career at the age of 16 and had become a role model for every cricket lover. In his 24 years of career, his achievements are immense and he is considered as an inspiration by millions. His personal life is also as stupendous as his professional life. Sachin Tendulkar had married the love of his life, Anjali Tendulkar and the beautiful couple dotes on their kids, Sara and Arjun.

Arjun Tendulkar had followed his father’s footsteps and had made his T-20 Mumbai league debut last year where his performance was highly appreciated. Arjun had proved that cricket is in his genes. Well, the doting son had not just opted for his father’s career, but is also a carbon copy of him. On December 3, 2020, Sachin took to his IG handle and shared pictures from his vacation and in one of the pictures, wherein, he posed with Arjun, we couldn’t help but notice their striking features. Arjun looked as handsome as his daddy. Sachin captioned the pictures as “Vacation Vibes.”

Sachin is a doting father, who always supports his children’s dreams. In a press conference, Sachin Tendulkar had talked about his son, Arjun’s interest in cricket. He had shared, "He is passionate and I have not forced him for anything. I never forced him to play cricket. He earlier used to play football, then he developed interest in chess and now he is playing cricket." (Also Read: Late Chiranjeevi Sarja's Wife, Meghana Raj Remembers His Last Moments And Reveals What He Told Her)

Arjun Tendulkar shares a very warm bond with his sister, Sara Tendulkar. On October 12, 2020, Sara Tendulkar had celebrated her 23rd birthday, and her brother, Arjun Tendulkar had posted a childhood picture to wish her. Arjun had posted an adorable picture with Sara from one of their vacations, and it was all about brother-sister love. Arjun had written, “Happy birthday @saratendulkar” followed by a heart emoticon. In September, 2020, when Arjun had turned 21, Sara had posted two pictures, one from their childhood and a recent selfie, to wish him on his birthday. Sara had written, "Can't believe you are 21. Happy birthday @arjuntendulkar21" and "Love you more than anything" atop her IG stories.

In an interview with the Hindustan Times, Sachin had shared the important lessons, he had taught his kids. He had stated, "I tell Sara and Arjun to value whatever you have got. If you are complaining about things you don’t have, trust me, even at 80 you will be doing the same and life will pass you by. Each one has his own share. God fixes a quota of things for everyone. You can’t have everything always. It is important to make the most of what is allotted to you. I have enjoyed every stage of my life. I am happy where I am, and thankful to God for blessing me with so much." (Also Read: Sonu Sood Pens A Sweet Note For His Beautiful Wife, 'Sonu' On Her Birthday, Shares A Cute Picture)

Do you also think that Arjun looks exactly like his father, Sachin? Let us know. 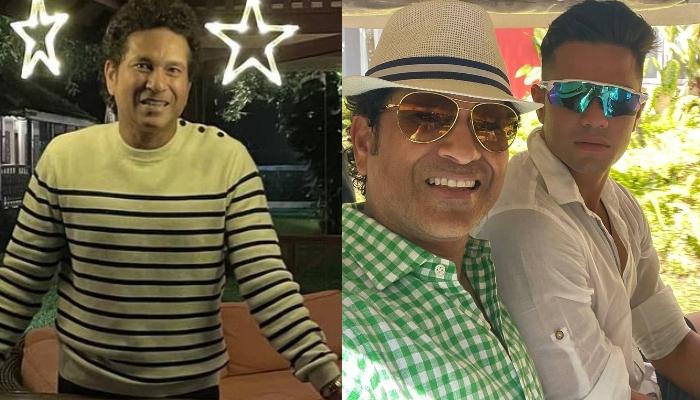 For men, fatherhood is one of the trickiest jobs that they had never really signed up. In fact, during half of their wife's pregnancy, they are clueless about their whole role of being a father. Earlier, fathers were only recognised as either the 'Hitler' or the 'Clown'. Jokes apart, fatherhood