Here is raising a toast for the brides, who ditched red on their wedding day and opted for white Sabyasachi lehengas to make their D-day memorable.

When we think of a bride, the image of a shy girl, wearing a red lehenga with her head covered in a veil comes to our mind. For years, the colour red has been synonymous with the Indian bride and we have grown up learning that a girl has to leave her house and become a part of her husband’s family, wearing her laal suhaag ka joda. The colour white in Hindu culture was considered inauspicious or in fact, is even now considered taboo for a newlywed. However, now the times have changed and the brides are breaking the stereotypes.

We have come far off from the times when a bride or a newlywed was restricted from wearing a white outfit. The brides of modern times do not fear experimenting with their bridal looks, even if that means wearing white on their wedding day. Here is raising a toast for the brides, who ditched red on their wedding day and opted for white Sabyasachi lehengas to make their D-day memorable. Also, we are highly impressed by their in-laws and social circle, who did not shame them for their bold step.

Also Read: Sabyasachi Bride Wore A Firoza Lehenga For Her D-Day And Great Grandma's Jewellery For Her 'Mehendi' 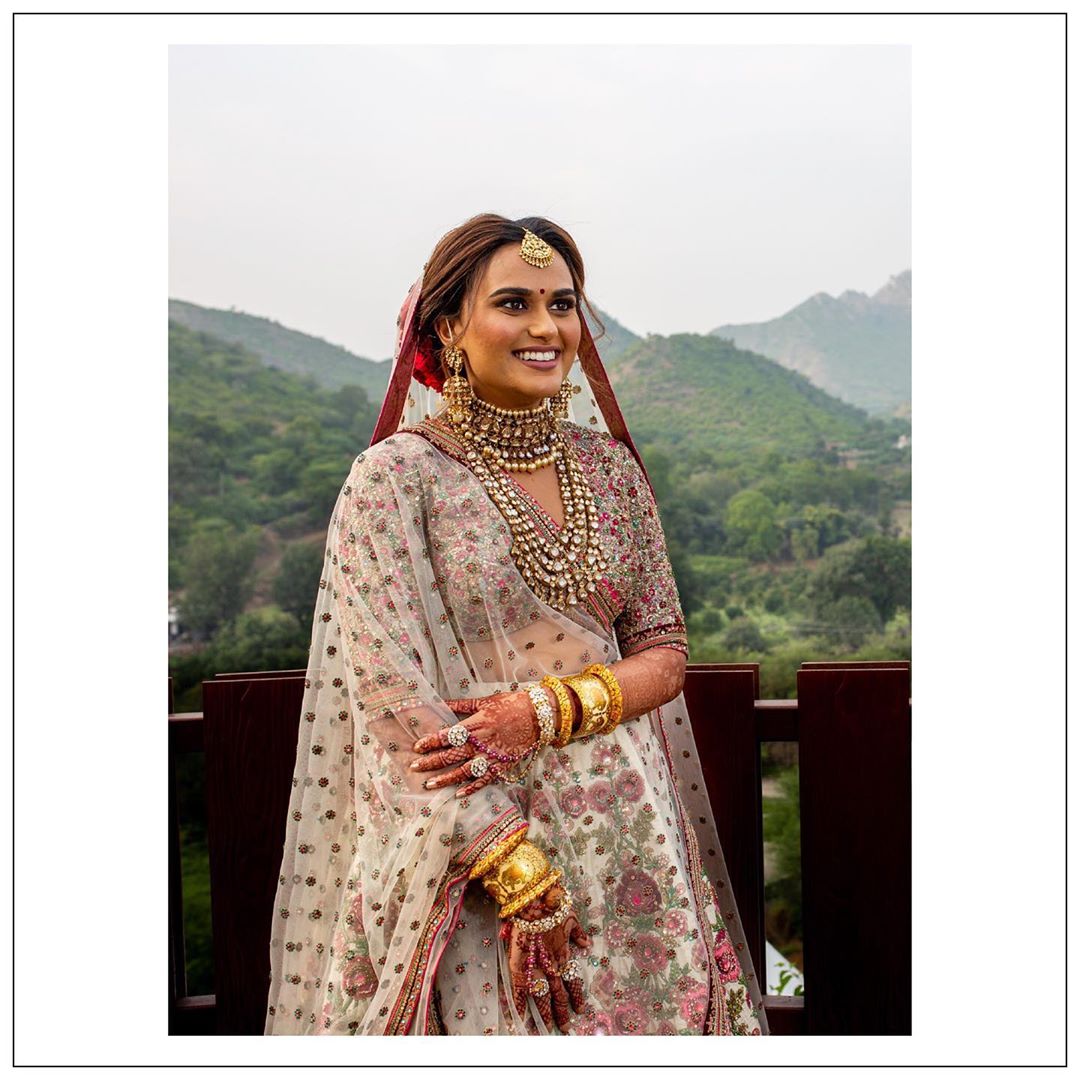 Bride, Meha Patel, had given us major fashion inspiration on how to style a white lehenga for shaadi. She had opted for a Sabyasachi Mukherjee's ensemble for her day wedding and had looked gorgeous. On a white base, her lehenga had red floral detailing all over it with green buti work. Her skirt was beautified with a broad border made in the mix of red and gold. She had teamed her lehenga with a white net dupatta with golden work over it and a heavily embellished blouse. 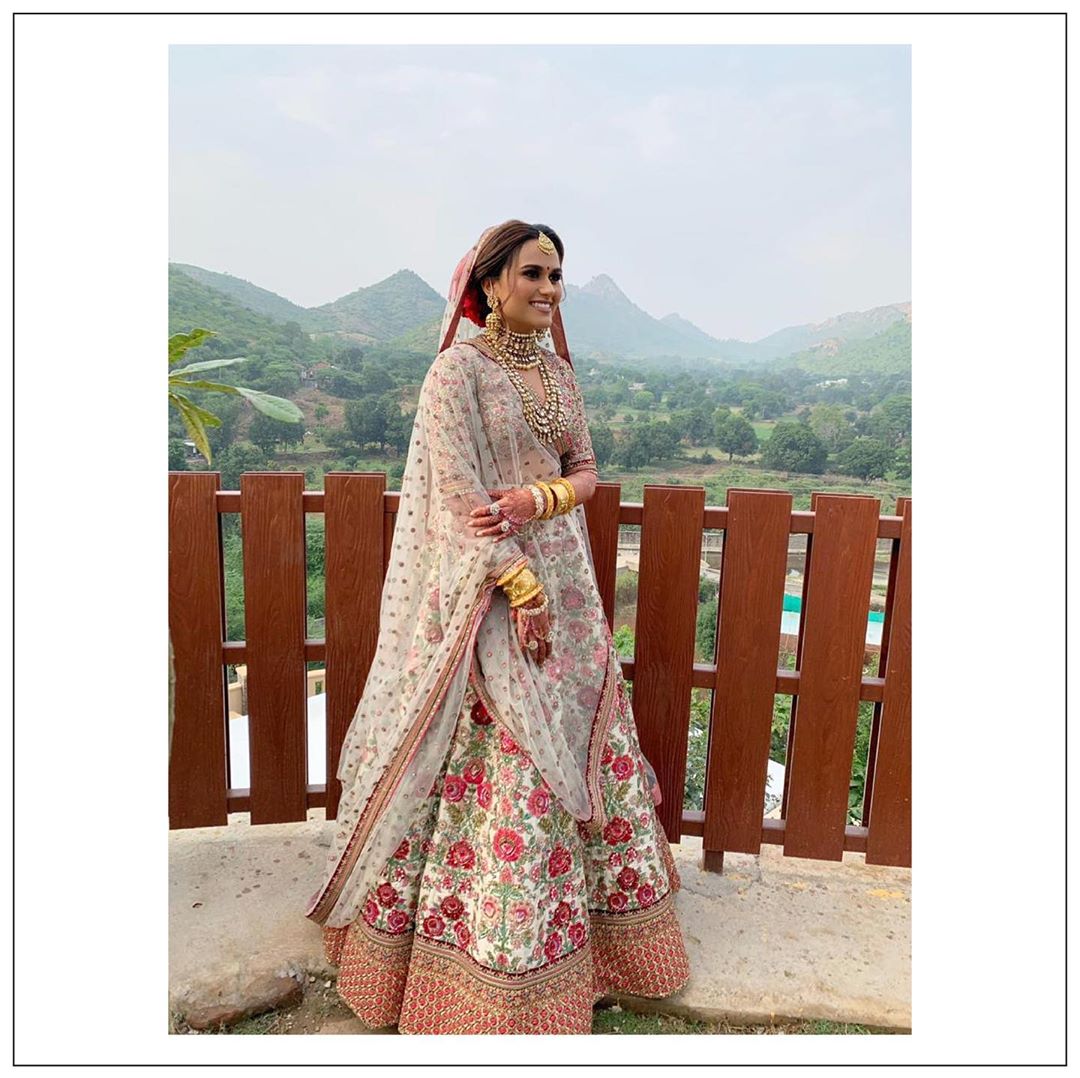 Meha had accentuated her bridal look with a kundan choker neckpiece, a raani haar, jhumkas and a maang teeka. Subtle makeup with hair tied in a low bun had completed her look. To add a traditional touch to her look, she had added three broad gold kadas. Sabyasachi bride, Isha from Mumbai, had got hitched in a wedding that had looked like the set of one of Sanjay Leela Bhansali's extravagant, period films. She had worn a white lehenga with hues of crimson at the hem and aqua at the waistline. What had made her lehenga stand out was the intricate detailing with complex, and multicoloured patterns, resembling Madhubani paintings embroidered on it. The crimson-hued border of her lehenga had heavy mirror work which had given a royal look. 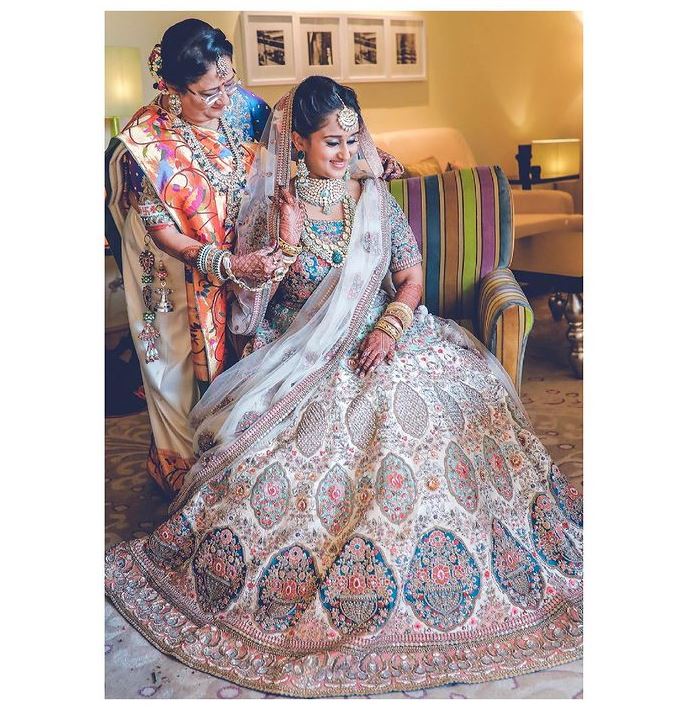 Talking in detail about Isha's wedding outfit, on the white base, the delicate geometric patterns in shades of blue with heavy detailing in embroidery and mirror work had looked unique. Isha had opted for a blue coloured choli with flowers embroidered over it in crimson and aqua colours, adding contrast to her white lehenga. To go with her exquisite attire, she had opted for heavy jewellery. Her Jodha Akbar style layered jadau neckpieces were the perfect accessories for her royal wedding ensemble. Isha had further completed her look with a matching maang teeka and a half ring nath. 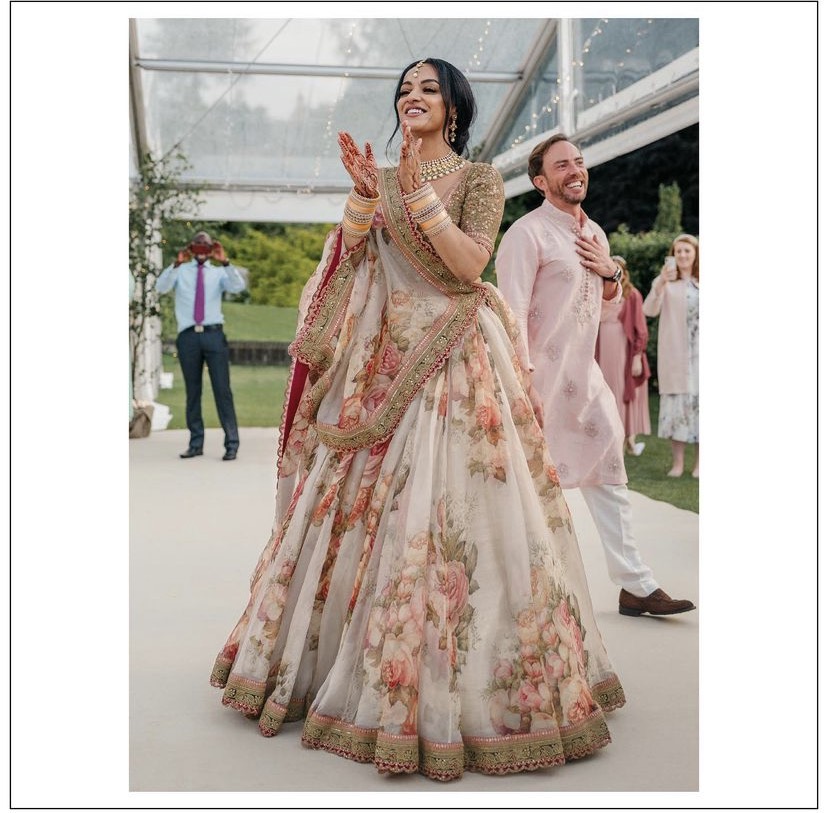 Bride, Sukhi Kaur had dazzled in a white Sabyasachi ensemble for her day wedding in England. For her big day, she had kept her bridal look minimal yet alluring. She had donned a white lehenga from Sabyasachi in organza fabric with peach and pink coloured roses printed over it. The hem of her skirt had a pink and gold cutwork border and she had draped a similar dupatta to accentuate her look. 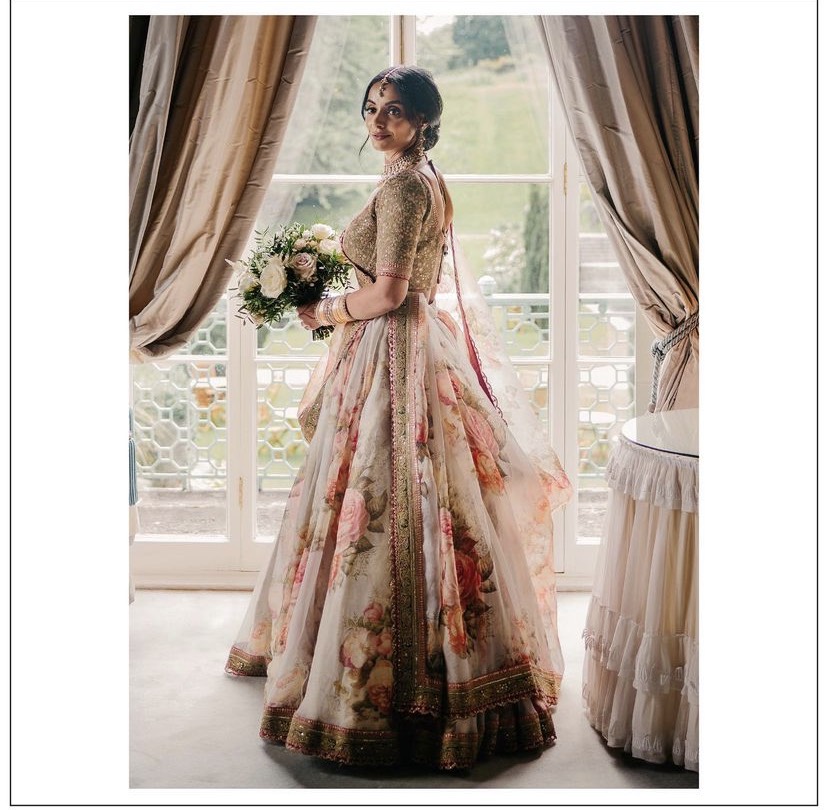 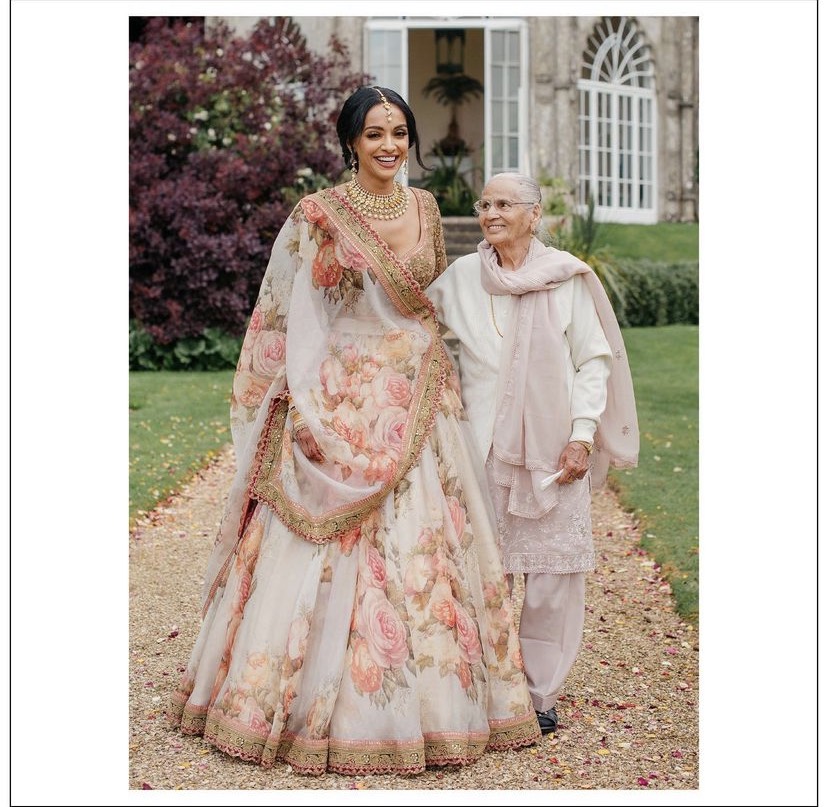 To break the monotony of white and pastel shades, Sukhi had teamed her lehenga with a plunging neckline, brown base, golden embroidered blouse with peach-coloured piping around it. She had completed her look with peach and white bangles, a golden neckpiece, a maang teeka and matching earrings. 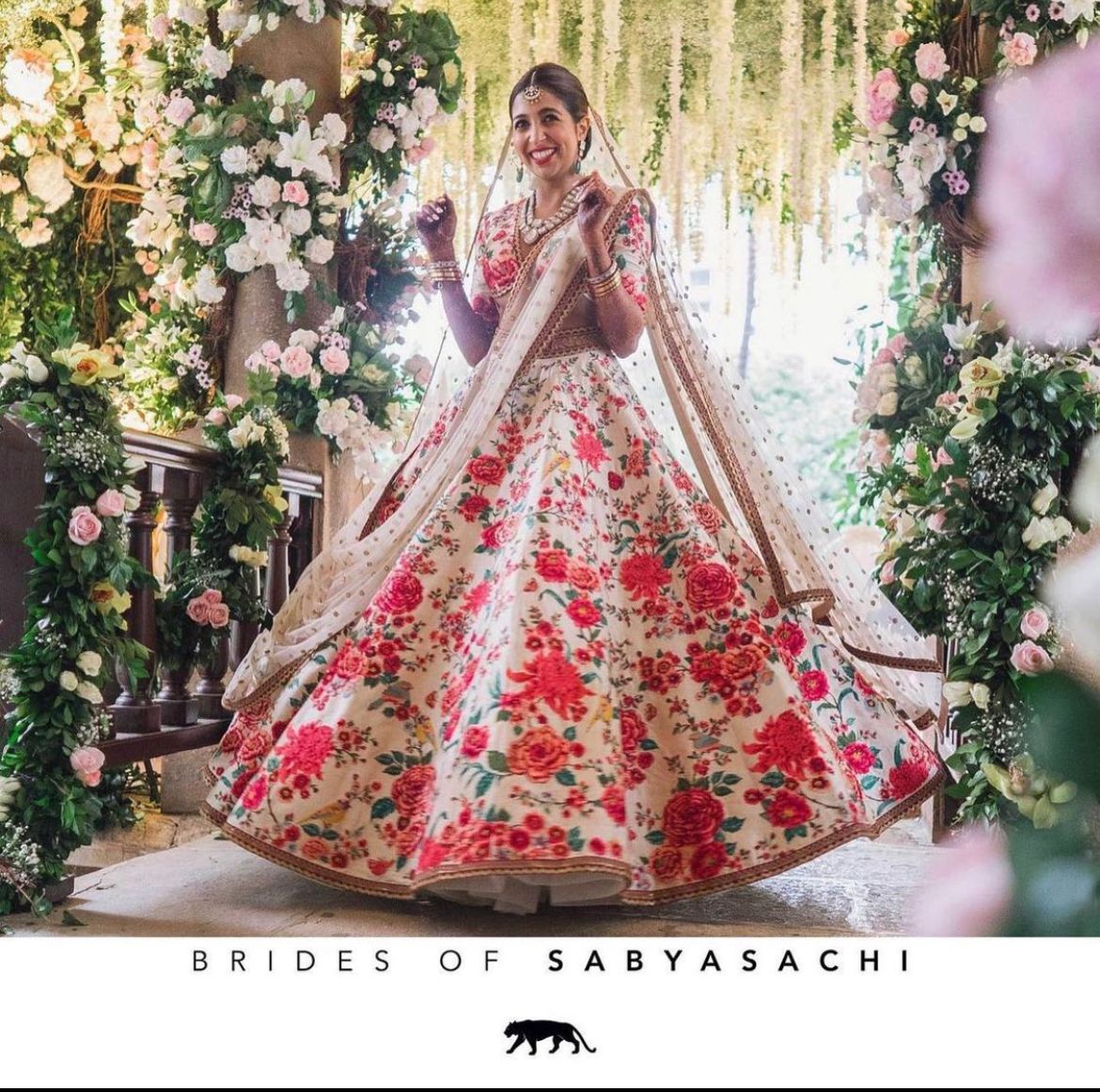 Bride, Aditi Shah had worn Sabyasachi Mukerjee’s white lehenga on her wedding day and had looked stunning. Her white base lehenga was filled with flora fauna embroidery with red flowers, green leaves and multi-coloured birds. The design of her lehenga looked even more eye-catching as the embroidery on her skirt got dense with the increase in the ghera. The hem of her skirt was completed with a sleek red and gold border, while the waist belt of her lehenga had a similar patterned border in a broader version. 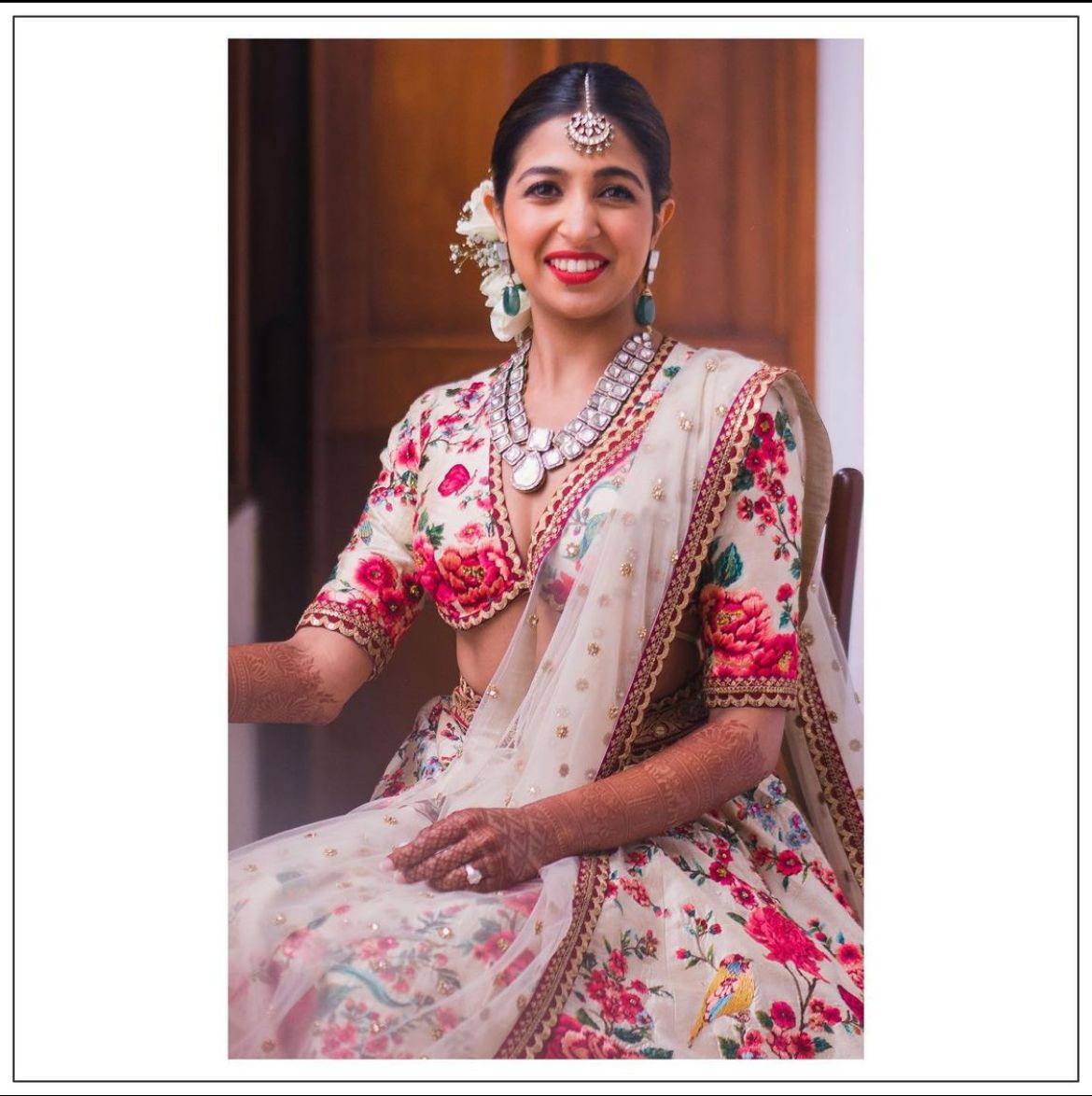 She had completed her look with a white net dupatta with golden sequin work on it and a similar border as on the skirt. She had teamed a similar flora-fauna choli-cut, plunging neckline blouse with her skirt, balancing the complete look of her bridal attire. She accentuated her look with green pearl drop earrings, a maang teeka and a silver un-cut polki neckpiece. She had kept her makeup simple and had added red lipstick to give it an edge, and had tied her hair in a neat bun with white flowers. 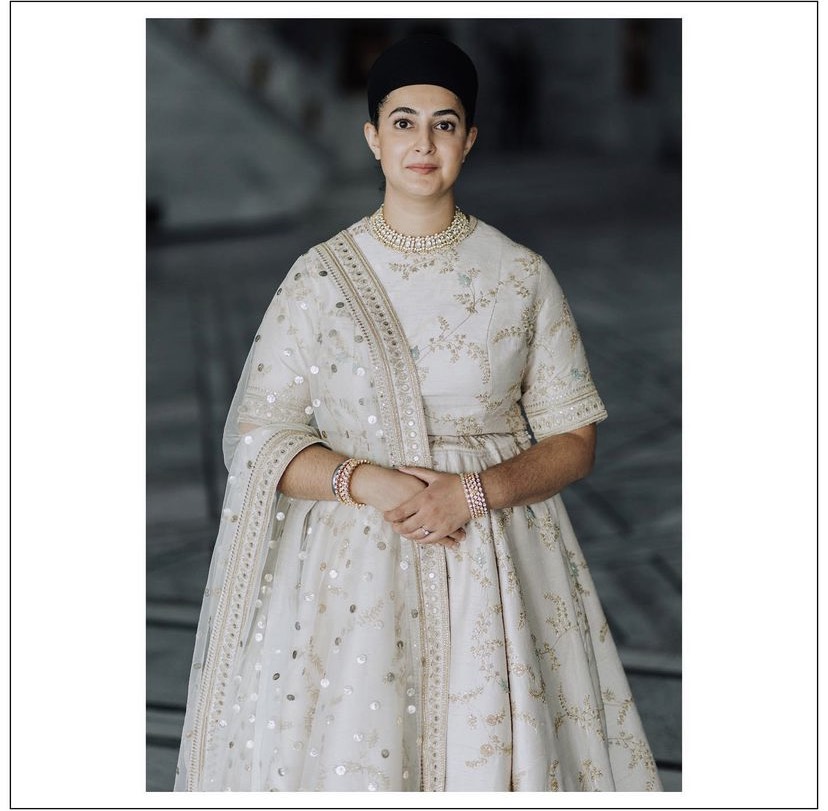 Bride, Prableen Kaur’s wedding lehenga will remind you of Alia Bhatt’s lehenga that she had worn for Sonam Kapoor Ahuja’s wedding reception in 2018. Yes, Prableen had opted for the same lehenga as Alia Bhatt from Sabyasachi Mukherjee. However, while Alia had worn the lehenga in neon colour, Prableen went for white. For her Gurudwara wedding in Norway, Prableen had turned into a Sabyasachi bride. Talking about Prableen’s wedding look, she had opted for a white lehenga crafted with wispy organza and silk. The ensemble was hand-embroidered with floral motifs in delicate golden thread-work. The hem of the skirt and the sleeves of the blouse were finished with a white and gold delicate border. She had completed her attire with a white dupatta which had foil print over it and was laced with a broad border. She had kept her makeup minimal and had added a kundan neckpiece and kada to finish off her look.

Well, we are highly impressed by these five brides of Sabyasachi, who broke the stigma attached to white for auspicious days and wore white at their wedding.

Next Read: This NRI Christian Bride Chose An Ivory Lehenga From Sabyasachi Mukherjee For Her Hindu Wedding