Being a mother is not at all an easy job, but every woman waits for the day to come. Recently, actress, Rupali Ganguly opened up on motherhood and sabbatical.

Women are the strongest beings on earth! After all, they are the only ones, who have the courage to give the limelight of their life to their tiny being which they have carried for nine-months inside them. They not only sacrifice their peaceful sleep and alone time to raise their little kids but also they go through physical and mental changes. Being a mother is a 24*7 thankless job that every woman happily signs up for without thinking twice. And television actress, Rupali Ganguly is a perfect example of it. (Recommend Read: Asin Thottumkal's Daughter, Arin Sharma Makes A Perfect Pout And Flaunts Her Heart-Shaped Sunglasses)

In the year 2013, Rupali had tied the knot with the man of her dreams, Ashwin K Verma. Later, she hopped on the journey of motherhood in the year 2015. Amidst it, acting took a backseat as Rupali was busy creating her own world with the love of her life and her munchkin. But she is all set to make a comeback on television with her show, Anupamaa. Recently, in an interview with Pinkvilla, Rupali opened up on why she took a sabbatical from work for seven-years. The gorgeous actress shared, "Seven years back after I gave birth, I gained weight. My body changed and I couldn’t look at myself. I would not step out of the house afraid of what people would say. If I couldn’t look at myself, why would people want to look at me? Self-doubt started seeping in. So, when Sarabhai 2.0 happened, I somehow managed to get out but then I realised I don’t want to leave my child alone. Hence, when an offer would come up, I would quote ridiculous figures."  (Also Read: Ambati Rayudu Becomes Father As Wife, Chennupalli Vidya Gives Birth To A Baby Girl [Picture Inside]) 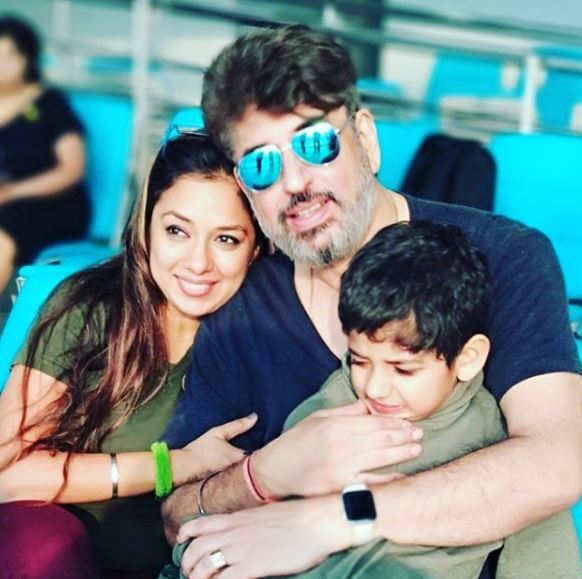 In the same interview, Rupali revealed that it was her husband, who had encouraged her to take the role. She stated, "When I told my husband about it, he was the one who pushed me to take up the offer. He said, ‘Go, live your dream.’ Such roles come in a lifetime and you must definitely take it up." She also revealed why she did not take up any other offers, "After Monisha, a lot of comical roles were offered to me but I did not want to do it. They weren’t as exciting." In a throwback interview with The Times of India, Rupali had talked about her husband and how they fell in love. She had said, "We were just friends for 12 years. We first met when I had modeled for one of his commercials. Then we became friends and started working together. He was my confidant, friend, philosopher, guide. He was the one who encouraged me to join television. Love shuv kab hua pata hi nahi chala. I just know he loves me a lot. So I am in a happy space now. We own an ad agency together and have been making commercials since the last 12 years. Our commercials have been nominated for the Emmy’s nine times. Ashwin means the world to me." (Don't  Miss: Dimpy Ganguly's 'When Bae Takes Her V/S When She Goes Shopping' Comparison Is Every Mom's Situation)

Well, we are excited to see Rupali back on our television screens!