Just like celebs have been posting their little ones' pictures on social media during the lockdown to spread happiness and positivity, Asin Thottumkal is too delighting her fans with glimpses of Arin.

If you thought that only celebs like Kareena Kapoor Khan, Alia Bhatt, Deepika Padukone, Priyanka Chopra Jonas, Karan Johar, Ranbir Kapoor, Bipasha Basu Singh Grover, Ranveer Singh, Malaika Arora, Karisma Kapoor and Shahid Kapoor, have aced their pout game, then you're wrong! The celeb kids aren't far behind. In fact, they have taken the pout fever to another level with their cuteness factor. After Misha Kapoor, Inaaya Naumi Kemmu and Taimur Ali Khan, we have Asin Thottumkal and Rahul Sharma's daughter, Arin Rayn, swooning us with her perfect pout. (Also Read: Karan Patel Recalls Moment When He Had Cried While Cutting Umbilical Cord Connecting Ankita And Mehr)

With style genes of her dad, Rahul Sharma and cuteness of her mommy, Asin Thottumkal, their little cheesecake, Arin Rayn is stealing the limelight from her star parents and like how! Just like Asin and Rahul had kept their relationship and pregnancy under the wraps, they had managed to keep their little girl away from the media limelight for a year. It was only on Arin's first birthday when Asin and Rahul had posted the first pictures of their princess. 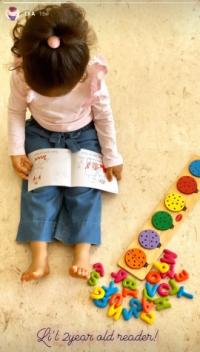 Just like celeb parents have been posting their little ones' pictures and videos on social media during the lockdown to spread happiness and positivity while we fight the pandemic, Asin Thottumkal is too, delighting her fans with glimpses of her daughter, Arin Rayn. Giving a glimpse of her stylish daughter, who's grown up enough to decide what she wants to wear, Asin posted two IG stories. On the second one, which is the black-and-white version of the first picture, Asin wrote, "Don't ask me...! She picks what to wear herself! Especially the sunglasses" atop it. 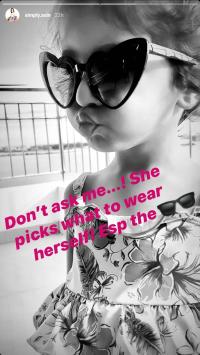 Over the two-and-a-half-years, Asin Thottumkal and Rahul Sharma had kept their daughter, Arin away from the media spotlight and very rarely post pictures of her on their respective social media handles. But thanks to lockdown, the proud mother, Asin has been delighting her fans with glimpses of her little one's painting, cooking, cleaning sessions amongst other activities. And every picture of Arin leaves a big smile on our faces! Sometime back, Asin had posted pictures of her 'wizard', Arin and it was then confirmed how the little one manages to make everyone smile. Looks like that’s the little wizard's superpower! (Also Read: Dimpy Ganguly's 'When Bae Takes Her V/S When She Goes Shopping' Comparison Is Every Mom's Situation) 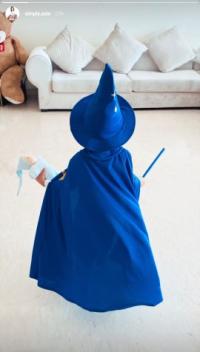 Back in 2017, Asin Thottumkal and Rahul Sharma had released an official statement to announce the arrival of their 'angelic baby girl' on October 24, "Ecstatic to announce the arrival of our Angelic Baby Girl earlier today. Thank you for all your love and wishes. She is the best birthday present I could ever ask for!" It was a year later when Asin had shared the first-ever picture of their daughter and had revealed the little one's name on her first birthday. Wishing their daughter on her first birthday, Asin had written, "Happy 1st birthday ARIN! #arinturnsone." During the lockdown, we have been seeing how the star parents are making sure to keep their little ones engaged and entertained at home. Arin had explored her painting skills in the lockdown and her proud mommy, Asin Thottumkal had given a glimpse of the same on her IG feed. To bring a smile on the faces of her fans, Asin posted two pictures of her daughter, Arin on her IG stories. Covered in a blue and yellow coat, little Arin can be seen engrossed in painting the white canvas. (Also Read: Raveena Tandon Wishes Happy Birthday To Son, Ranbirvardhan On His 13th Birthday, Shares Rare Photos) 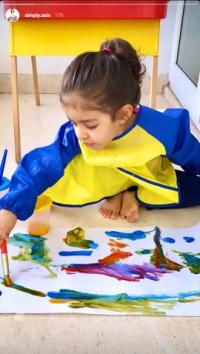 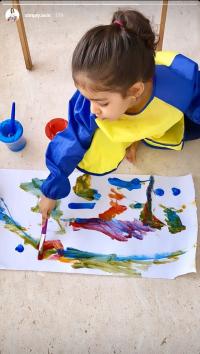 Isn’t Arin acing the pout like a pro? Much love to the little princess!