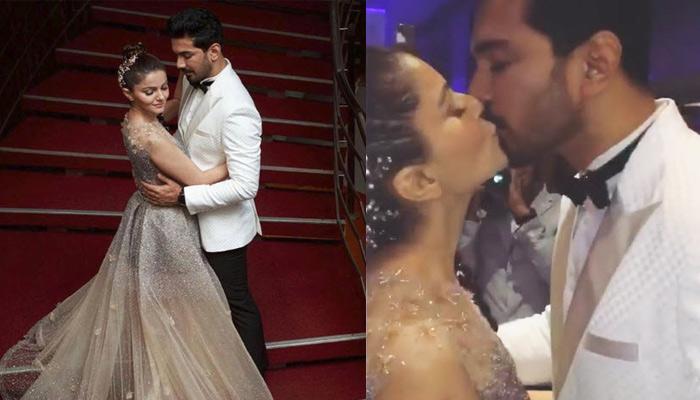 One of the most loved cuties of Indian television fraternity, Abhinav Shukla and Rubina Dilaik, decided on forever on June 21, 2018. Their modest yet elegant wedding took place at the famous palace of Shimla named, Woodville Palace. Theirs was a dreamy wedding in every sense. Rubina and Abhinav’s friends from the industry were present to make their day even more memorable. Hussain with wife Tina, Sharad Kelkar and his wife Keerti Gaekwad Kelkar, Srishty Rode, Rahuol Lohani, Karan V Grover, Poppy Jabbal, etc. were present at the do. (Also Check: Akash Ambani And Shloka Mehta's Pre-Engagement Party Was Regal, Nita Ambani Stole All The Limelight) 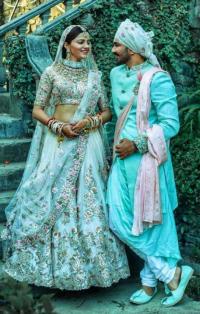 After their super-elegant Shimla wedding, newly-weds Rubina Dilaik and Abhinav Shukla hosted a post-party in the evening. On June 26, 2018, they had a reception ceremony in Abhinav’s hometown, Ludhiana. Yesterday, on June 28, 2018, the couple had a starry and most extravagant reception party in Mumbai. Both of them looked like a dream yet again. Rubina looked ethereal in a metallic grey, crystals-studded gown, which she teamed up with a vintage rope plait. On the other hand, Abhinav nailed it with his dapper look in a white and burgundy tuxedo, paired with a bow tie. (Don't Miss: Newly-Weds Shriya Saran And Andrei Koscheev's Post-Wedding Kiss Picture Goes Viral) 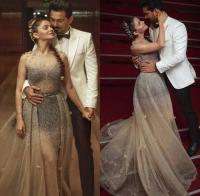 She nailed her Goddess-like look and how! And now, we have a few videos from the do, Remember, we informed you earlier that Rubina Dilaik and Abhinav Shukla have planned to take seven secret vows also? Earlier, before her wedding, talking to a media portal, Rubina had shared, “I am feeling neither nervousness nor excitement, as the preparations for the wedding and my ongoing TV show shoot schedules have left me numb (laughs). Coordinating things is very difficult. I have hardly slept for four to five hours a day in the last one-and-a-half months. Abhinav and I have decided to exchange seven vows after the traditional wedding. I have written mine and I hope he has too”.

Well, yeah, that happened yesterday on their Mumbai reception. Yes, the couple took seven secret vows, which followed a loving and passionate kiss. Here are the videos, check them out:

Aww! Don’t they look super-cute together? This much-in-love couple has been giving goals throughout their dating period and it seems that they are gonna keep giving cues to others. To grace the occasion celebs namely, Kamya Punjabi, Nia Sharma, Gurmeet Choudhary with wife Debina Bonerjee, Drashti Dhami with husband Neeraj Khemka, Shakti Arora with wife Neha Saxena, Vivian Dsena and many other celebs were present. (You May Also Like: 'Bhabhi' Shloka Mehta And 'Nanad' Isha Ambani Twinning For The Mehendi Ceremony In 'Mogra Dupattas') 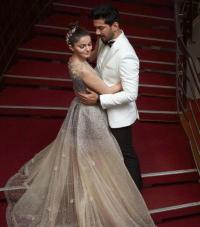 Talking about the superhit wedding and starting this new journey of life together, an elated Abhinav Shukla said, "Well, I couldn’t have been happier! Everything went off very well and we are so blessed to have got so much love and wishes from all those who are close to us. Rubina and I have been together since so long and she understands me completely. I am blessed to have her as my wife and I can’t wait to start this journey with her." 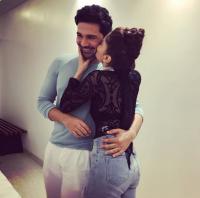 For the ones who don’t know, Rubina’s wedding gift for Abhinav was a song Teriya Mohabbataein, which she wrote herself and it took her four months to prepare. Talking about the same, Rubina was quoted as saying, “It took me four months to create the song, Teriya Mohabbataein, which is a Hindi and Punjabi mix. It’s my gift to Abhinav, as I wanted to dedicate him something in his mother tongue. Everybody expected me to dance, but I wanted to do something unexpected. I made an audio-visual representation of our relationship, sang the song, recorded it and played it. It was like a musical skit, which was enacted by my friends. That was the highlight of the evening”. (Also See: Multi-Millionaire, Famous Designer Shriya Bhupal's Wedding Invite Is Elegant; Dress Details Inside) 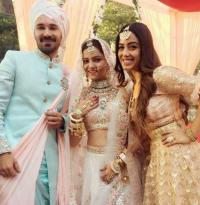 Heartiest congratulations to the newly-wedded couple, Rubina Dilaik and Abhinav Shukla on entering the marital bliss. May you a happy and love-filled life ahead! So telly town’s one of the most favourite, real-life jodis have pronounced themselves as ‘husband and wife’ on June 21, 2018 and fans can’t get over how beautiful they look with each other. Truly, from clicking fun pictures with her girl-gang to Rubina’s beautiful attires, she looked breathtaking in everything she sported. While