Mukesh and Nita Ambani’s eldest son Akash Ambani is officially getting engaged to his childhood sweetheart, Shloka Mehta on June 30, 2018, in a grand ceremony in Ambanis' home, Antilia. The pre-engagement celebrations for the couple are going on in full swing and all the big wigs of Mumbai are a part of it. (Also Read: 'Bhabhi' Shloka Mehta And 'Nanad' Isha Ambani Twinning For The Mehendi Ceremony In 'Mogra Dupattas')

After a regal mehendi ceremony on June 27, 2018, Mukesh and Nita hosted another party for their friends and relatives, a pre-engagement bash, on June 28, 2018. The party was held in their Mumbai home only and all the big stars from Bollywood including Shah Rukh Khan, Gauri Khan, Karan Johar, Alia Bhatt, Ranbir Kapoor, Ayan Mukerji and Priyanka Chopra attended the celebrations. From the cricket world, we saw, Ambanis' close friend, Sachin Tendulkar and his wife arriving at the party. (Take a look at First Look Of Rubina Dilaik And Abhinav Shukla From Their Mumbai Reception, They Look Spectacular) 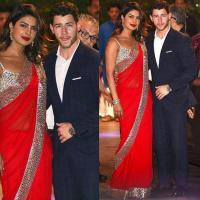 Though many eminent personalities attended the party, the limelight was taken away by our desi girl, Priyanka Chopra who arrived hand-in-hand with her alleged boyfriend, Nick Jonas. This time, the actress didn't shy away but posed for the shutterbugs with Nick. 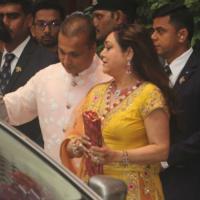 The younger Ambani brother, Anil also arrived with his wife, Tina Ambani. As June 30, 2018, is a big day for Ambanis, Mukesh and Nita have reportedly ended their family feud with younger brother, Anil and his wife, Tina. The happy parents have personally invited chacha and chachi of the groom-to-be for the ceremony and after almost 13 years, we are witnessing two brothers coming close and hugging each other. It was a heartwarming moment at Isha's engagement a few weeks ago when the two brothers met with all the love in their heart. Both the brothers were not been on talking terms since 2005 over their dispute on the family business. 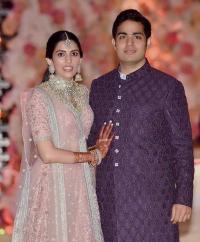 The power couple, Akash and Shloka entered together, holding each other's hand and looked much in love. The bride-to-be wore a pink, heavily embellished lehenga with heavy kundan jewellery, all designed by Sabyasachi Mukherjee. The groom-to-be looked handsome in a royal bandhgala. The smile on their face was a proof that how happy they were in each other's company. This was their pre-engagement sangeet ceremony and they looked every bit regal.

The entire Ambani clan was dressed to impress in their expensive, designer outfits. All of them wore traditional outfits and our favourite was Nita's outfit. She wasn't looking like the mother of the groom, she was slaying in her heavily embellished red saree and stunning jewellery (we loved her nath). Nita, with her beauty and impressive dressing sense, stole all the limelight. We also loved the sister of the groom, Isha Ambani's lehenga in the shades of pink, designed by ace couturiers, Abu Jani and Sandeep Khosla. (Check Out: Shweta Tripathi And Fiance Chaitnya Are Having A Gala Time At Their Pre-Wedding Bash, Videos Insid)

For the uninitiated ones, Akash and Shloka studied together in the same school, Dhirubhai Ambani International School and have been friends for years now. The couple fell in love and on March 24, 2018, Akash officially proposed to Shloka in Goa, in the presence of their respective families. The couple is expected to get married in December 2018 but nothing is confirmed yet. (Also Read: Multi-Millionaire, Famous Designer Shriya Bhupal's Wedding Invite Is Elegant; Dress Details Inside) 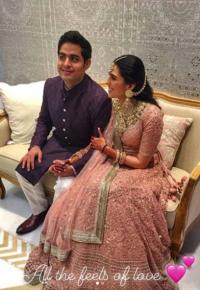 The soon-to-be Ambani bahu, Shloka Mehta is the daughter of Russell Mehta who is the owner of Rosy Blue Diamonds, one of India's leading diamond companies. Shloka is currently managing Rosy Blue Foundation as a director. 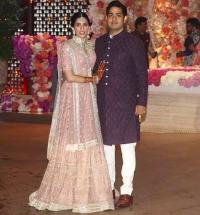 If the pre-wedding functions are this grand and spectacular, we can't wait to see how the engagement ceremony at Antilia is going to be!