With every season of the most controversial television show, Bigg Boss, apart from the fair share of ugly fights, ‘planning and plotting’ and loads of drama, it is the pyaar and takraar which spikes the TRPs like nothing else. And just like how things have been in the past seasons, Bigg Boss can be easily renamed as 'Bigg Matchmaker'. While some budding love stories lost its charm as soon as the show ended, some relationship grew stronger with each passing day. Apparently, Bigg Boss 12 contestant, Rohit Suchanti has successfully managed to bloom his ek tarfa pyaar with Srishty Rode even after they got evicted from the show. (Also Read: Kamya Panjabi Regards Shalang Dang As Family In A Post, Once Rumoured Beau, Manveer Gurjar Comments)

From partying with their Bigg Boss 12 buddies, celebrating birthdays together, going on holidays and collaborating for work, the friendship between Rohit Suchanti and Srishty Rode have grown stronger with each passing day even after their eviction from the show. Rohit had, time and again, expressed his feelings for Srishty but she kept on rejecting his love, owing to her former relationship with Manish Naggdev. Unfortunately, this did take a toll on Srishty and Manish’s relationship and they had parted ways in early 2019. On September 24, 2019, Yeh Ishq Haaye fame, Srishty Rode turned 27 and her rumoured beau, Rohit Suchanti posted a heartfelt wish for his ladylove. Sharing a throwback picture from their Bigg Boss days, Rohit wrote, “I don’t know how to start, but first of all wanna wish you a very HAPPY BIRTHDAY. You are one of the most happiest and the nicest soul I’ve ever come across, you’re literally mental, a pshycopath etc etc etc, and that’s what makes you so so special. Never let the Bollywood die in you and when you smile, it’s just not you smiling at that very moment, you make others smile at the same time that’s how infectious your smile is.” Rohit Suchanti’s birthday post for Srishty Rode could be further read as “And I have learned that friendship isn’t about who you’ve known the longest but it’s about who came and never left your side, and I know for a fact that you never gonna leave my side. May God bless you with everything you ever wanted in your life, and I promise you, no matter what happens never gonna leave your side. It’s your time to shine now, your fuckin year and thank you for always supporting me and being there through the thick n thin. You’re a rockstar and please JOIN A GYM FASTTTTT ITS TIME. YOU GO GIRL happy birthday once again, can literally write a book on you drama queen but I think have said enough for this birthday haha. God bless you. Youuuuuuuuu Myyyyyyyy besssttttttt friennndd.” 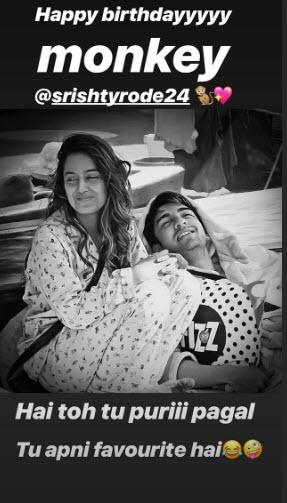 It was Rohit Suchanti’s 23rd birthday on April 6, 2019, and his crush, Srishty Rode had posted two fun-filled pictures with him along with a heartfelt wish. The same could be read as “Happiest birthday you crazy boy!!! always be the way you are and don’t let the world change you @imrohitsuchanti #StraberryWarga coming soon Clothes styled by @sidneysladen.” To this, Rohit had commented, “Love the caption hahaha, thank you for always bringing that smile on my face”, backed by a smile and a kiss emoji. (Also Read: 'Bigg Boss 13' Contestants Sidharth Shukla And Arti Singh Are In A Relationship With One Another?) In an interview with the Bombay Times, Rohit Suchanti had confessed his love for his once Bigg Boss co-contestant, Srishty Rode. Commenting on her breakup and his feelings towards her, the 23-year-old actor had shared, “There were issues in their relationship even before she entered the house. They split owing to their differences and I have no role to play in that. It’s easy for people to assume otherwise. No one ends a relationship of four years for a guy she has known for a month. Yes, my feelings for her were evident inside the house, but she never reciprocated. She told me about the split when I called her soon after my eviction from the show. She was extremely sad, and I tried to calm her as a true friend. She is still hurting and trying to come to terms with it." Rohit Suchanti had continued, “I dropped many hints inside the house, but could never muster the courage to tell her directly. I genuinely like her and feel it’s about time I confessed my feelings to her. I don’t know what her reaction will be. When I was inside the house, people pointed out the five-year age gap (he is 22) between us, but that has never deterred me. Love knows no such barriers. Srishty has the prettiest smile and I appreciate the way she handled me inside the house. She was my strongest support She was the first girl I interacted and connected with on 'Bigg Boss'. I don’t want to keep my feelings to myself and I don’t care what people have to say about us. It will be between us. I am excited about confessing my feelings to her, but I don’t know what her reply will be." 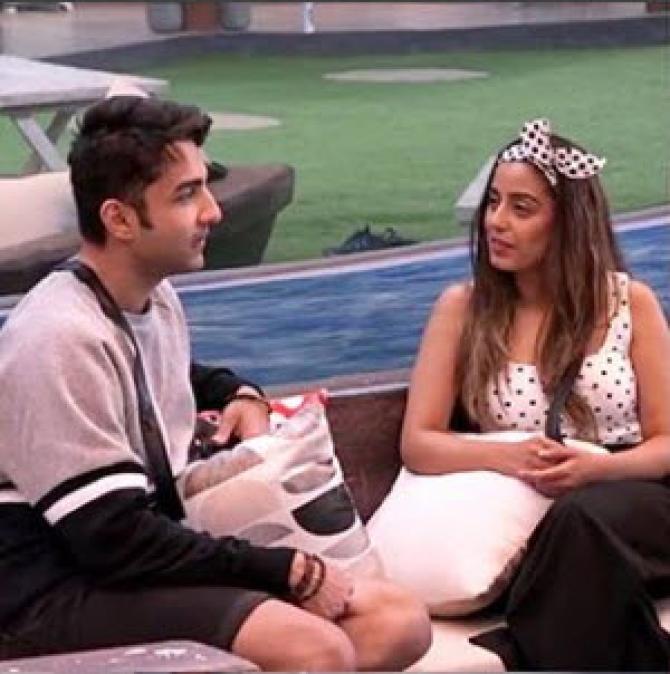 Post this, their fans were interested to know what Srishty Rode’s reply would be, and soon an Instagram picture and its caption from her account had provided an answer for Rohit Suchanti. Srishty had posted a beautiful picture of herself and had captioned it as "You can’t change how people feel about you, so don’t even try. Just live your life and be happy." While fans speculated if that was a much-needed answer for Rohit, their Bigg Boss 12 co-contestant, Karanvir Bohra didn't fail to take a dig at him and had commented, "So there is your answer @imrohitsuchanti (I think) Do I smell #jhonnylever bells from the movie #humhairahipyaarke.” To which, Rohit had replied, "@karanvirbohra ek tarfa pyaar ki takat hi kuch aur hoti hai KV BHAI aap nhi samjhoge. Was that quote for me though @srishtyrode24?" (Also Read: Tiger Shroff's Sister, Krishna Shroff Is All Set To Get Engaged To Her Boyfriend, Eban Hyams) 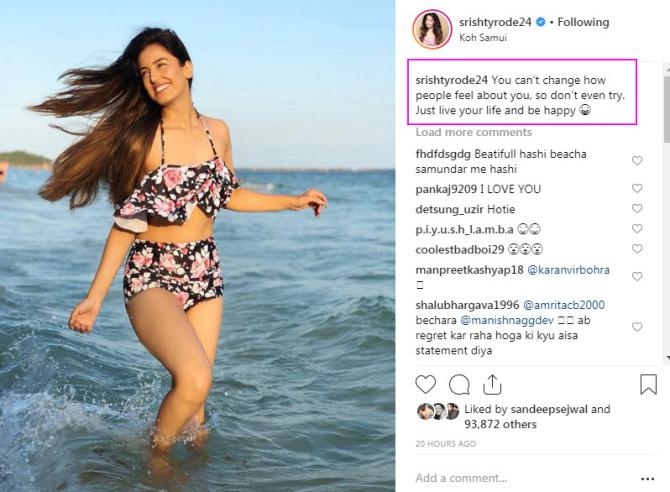 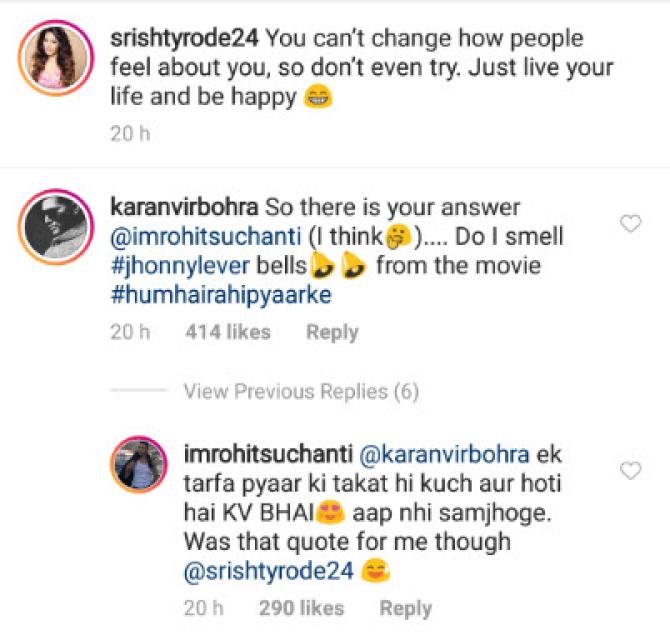 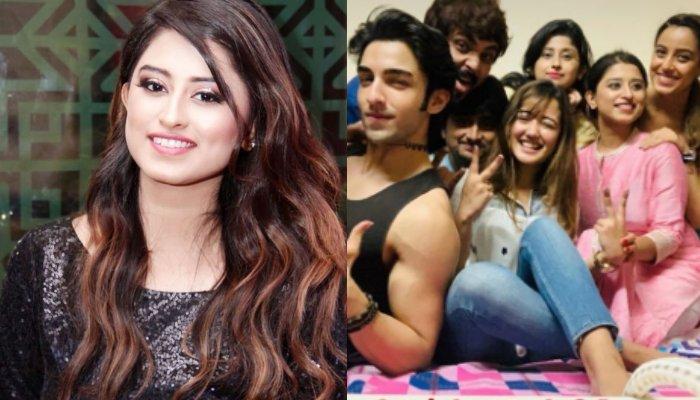 Admit it or not, Bigg Boss, which is often termed as India’s most controversial reality show is loved by many! The moment we reach the last quarter of the year, begins our speculations about which of our favourite celebs will we get to spot in their ‘real avatar’ on our