Genelia Deshmukh and Riteish Deshmukh are one of the adorable couples of the Bollywood industry. With their social media PDAs to the sweet gestures, their love story is meant to be forever. Fifteen years ago, the release of the film Tujhe Meri Kasam is marked as a beginning of this couple’s love story. As we all know, Riteish is the son of Late Shri Vilas Rao Deshmukh, who was then Maharashtra’s Chief Minister. Genelia expected him to be a rich spoilt brat and full of tantrums, so she decided to give him attitude before he did. 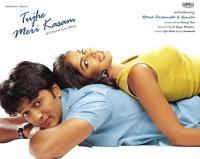 Then some sweet series of conversation happened between the duo on Twitter, when Riteish posted their picture from the film. This is what Riteish tweeted, “@geneliad didn’t speak to me for the first two days during the shoot of the film because my father was the Chief Minister on Maharashtra then.” And he further revealed that the first thing Genelia asked him when they first met is ‘where is your security?’ to which he replied, ‘I don’t have any’.

Then his adorably baiko replied to his tweet, “Of course ... who would think the CM's son didn't have security and was just a quiet boy who was going to take my heart away.” 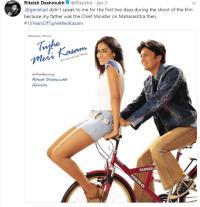 Riteish and Genelia tied the knot on February 3, 2012, and are blessed with two sons – Riaan (November 25, 2014) and Rahyl (June 1, 2016). Their journey from being the reel to real life couples is just awe-inspiring. Riteish is a doting husband who madly loves his wife and supports her in every decision. While on the other hand, Genelia believes that guys like her husband are very rare in today’s world. For this couple, the most important thing has always been to be happy with someone you love.

You two are giving couple goals and wish you a lifetime of togetherness.

Next Read: Isha Koppikar And Timmy Narang's Love Tale Tells Us That Matches Are Surely Made In Heaven