Amongst the bitter truths that we had to accept in 2020, our Dil Bechara is finding it hard to believe that Sushant Singh Rajput is no more with us. It was this day, one month back, when the most devastating news from the entertainment industry had popped up on our social media and television screens. Sushant had left the world mourning on June 14 when he hanged himself from the ceiling of his Bandra apartment. (Also Read: Ankita Lokhande Remembers Sushant Singh Rajput On One-Month Death Anniversary, Lights A Diya For SSR)

The world is shattered and still in disbelief that Sushant Singh Rajput is no more with us to make us believe in dreams, to make us smile with his acting stints, to make us groove a little with his dance acts and make us emotional with his films and serial. It has been a month since SSR had left us but no one, who knew and admired him could believe that he found suicide to be his only way out. It was in 2019 when the reports of the television actor-turned-Bollywood superstar, Sushant Singh Rajput dating the Bengali beauty, Rhea Chakraborty had surfaced in the media and the fans were rooting for this couple with all their hearts. 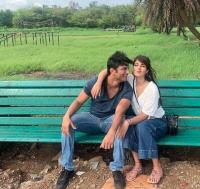 To mark Sushant Singh Rajput's one-month death anniversary, his not-so-rumoured-anymore ladylove, Rhea Chakraborty finally posted, for the first time since his demise, on her social media handle. Rhea penned a long heartfelt note for her Sushi and posted two pictures with him. Rhea began her note with "Still struggling to face my emotions.. an irreparable numbness in my heart . You are the one who made me believe in love, the power of it . You taught me how a simple mathematical equation can decipher the meaning of life and I promise you that I learnt from you every day. I will never come to terms with you not being here anymore. I know you’re in a much more peaceful place now." 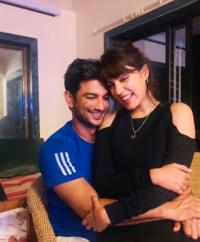 Rhea Chakraborty, in her emotional note for Sushant Singh Rajput on his one-month death anniversary, continued, "The moon, the stars, the galaxies would’ve welcomed “the greatest physicist “with open arms . Full of empathy and joy, you could lighten up a shooting star - now, you are one . I will wait for you my shooting star and make a wish to bring you back to me. You were everything a beautiful person could be, the greatest wonder that the world has seen . My words are incapable of expressing the love we have and I guess you truly meant it when you said it is beyond both of us. You loved everything with an open heart, and now you’ve shown me that our love is indeed exponential. Be in peace Sushi. 30 days of losing you but a lifetime of loving you... Eternally connected, To infinity and beyond." (Also Read: Rhea Chakraborty Admits Wedding With Sushant Singh Rajput In 2020 In Her 9-Hour Police Interrogation) 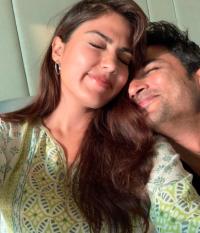 Sushant Singh Rajput's alleged girlfriend, Rhea Chakraborty was questioned on June 18, 2020, by the Mumbai Police regarding his personal and professional life. A month after SSR's demise, Rhea had also changed her WhatsApp display picture to a selfie with Sushant where the lovebirds can be seen flashing their beautiful smiles. The picture is proof of how happy they were with each other. 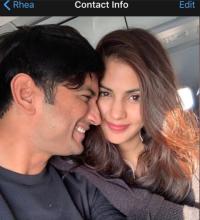 It was on June 18, 2020, when Rhea Chakraborty was questioned by the Mumbai Police. Rhea was reportedly interrogated for nine hours and a source had informed the media portal Pinkvilla, some information on what was recorded. According to the source, Rhea had admitted that they had plans of settling down by the end of 2020, "Rhea was asked to show all the text messages exchanged between the two. Her entire phone was scanned, including all their pictures and videos together. Rhea spoke about living in with Sushant and also revealed that they were planning to buy a property as well, as revealed by their broker previously. She admitted that they did plan to get married by the end of 2020." (Also Read: Sushant Singh Rajput's Family Had Told His GF, Rhea Chakraborty To Not Attend Actor's Funeral) 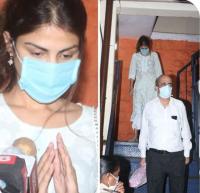 We hope Sushant is in a happy and peaceful space!