Renuka Shahane holds on to the most important person in her life. Shares a picture cuddling and twinning with husband, Ashutosh Rana. Scroll down to check out their cute pictures! Bollywood has given us some major iconic scenes, dialogues and some iconic characters too. We all remember Renuka Shahane in Hum Aapke Hain Koun..! and her fall from the stairs had then broken our hearts. However, now that has turned into a meme, but that scene is one iconic scene in the history of Bollywood. Talking about iconic characters, Ashutosh Rana has always been one actor, whose bandwidth has always excited his fans. From playing a psycho killer in Lajja to being a cool dad in Humpty Sharma Ki Dulhania, Ashutosh Rana has always shown his versatility. (Also Read: Sushant Singh Rajput's Handwritten Emotional Letter For His Mother, Read 'We Were Both Wrong Mother')

Imagine, when two actors with such iconic characters meet, they are bound to have a Bollywood movie-like love story. Ashutosh Rana and Renuka Shahane had gotten married on May 25, 2001, and have aced the character of husband and wife in their life gracefully. The couple is blessed with two amazing sons, Shouryamana and Satyendra, and their relationship has every feel of honesty. After 19 years of their marriage, the love between Renuka Shahane and Ashutosh Rana is still intact and fresh and Renuka shared proof of it. 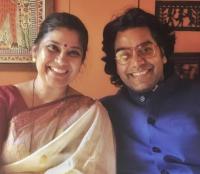 On June 18, 2020, Renuka Shahane took to her Instagram handle to share a collage of pictures with her husband, Ashutosh Rana. In the picture, both Renuka and Ashutosh can be seen twinning in a black and red outfit. The couple is all smiles and cuddles as they pose for the four pictures used in the collage. Along with the picture, Renuka talked about holding on to your loved ones and how she is blessed to have Ashutosh in her life. She wrote, “Hold on to your loved ones. Blessed to have @ashutosh_ramnarayan. Twinning in black & red.” Take a look at the picture below: On the occasion of completing 19 years of marital bliss with hubby, Ashutosh Rana, Renuka Shahane had posted a throwback picture from her wedding on her Instagram handle. Along with the picture, she had written the most beautiful lines, wishing her husband, Ashutosh a happy marriage anniversary. Her caption could be read as "You and I....what a beautiful world....19 years ago today.... love eternal @ashutosh_ramnarayan", followed by three heart emojis. Take a look at the picture below. Renuka and Ashutosh's love story is the 80's kind of romance! The two had met on the sets of the movie, Jayati, and Ashutosh was spellbound by Renuka's beauty and grace. Singer, Rajeshwari Sachdev had introduced the two to each other. On meeting Renuka, Ashutosh had shyly remarked, "Hum aapke bade prashansak hain." Renuka was overwhelmed by the appreciation, however, there was no contact between them for a long time until the Diwali party, which Renuka and Ashutosh, both were supposed to attend, but unfortunately, Ashutosh couldn't make it. But post that Renuka had received a voice mail from Ashutosh the next morning wishing her Diwali. And as they say, the rest is history! (Don't Miss: Irrfan Khan's Son, Babil Khan Looks Exactly Like His Late Father's Younger Version, Shares The Proof) Reminiscing their sweet, innocent love story, Renuka had once shared, "In October, director Ravi Rai was planning a serial, and he had Ashutosh, a few others and me in mind. Ravi Rai had thrown a Diwali party at his place where Ashutosh couldn't make it because he had to give an interview. The next day he called me on my answering machine wishing me a happy Diwali. This was on 17th October, he again called on 19th October and finally on 20th October 1998. Feeling a little awkward, I called him back and we ended up speaking for an hour. The days that followed were amazing, we spoke only on the phone because of our busy work schedule and finally, after almost three months we finally met on 31st December 1998." After two and a half years of courtship, the couple had tied the knot in Damoh, Madhya Pradesh, the birthplace of Ashutosh. (Recommended Read: Aashka Goradia And Hubby, Brent Share Their Meaning Of Love To Wish Each Other Love Anniversary)

If this is not couple goals, then God knows what is!