Irrfan Khan's son, Babil Khan shares a picture on his Instagram handle and he looks exactly like the younger version of his late father. Check out the picture inside! 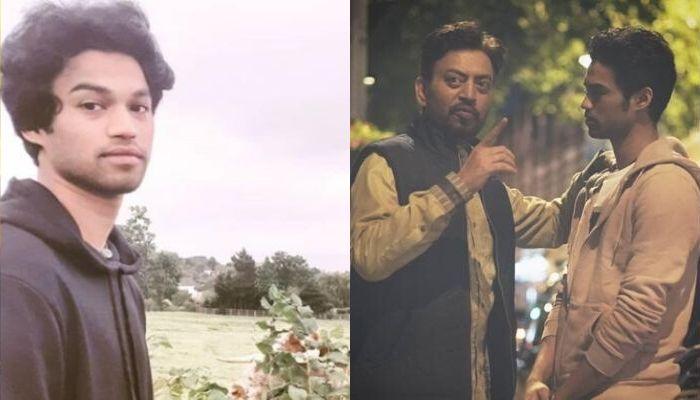 Life is never easy as it makes you lose the people you could never imagine a life without. On April 29, 2020, the nation had woken up to the news of Angrezi Medium actor, Irrfan Khan's sudden demise, breaking million hearts. Nobody had dreamt of something like this, and nobody ever wanted this to happen. His generosity had touched people for he was a gem of a human. However, we cannot get him back, but we can certainly remember him and his memories will live on forever. (Also Read: Ali Fazal's Mother Passes Away, Actor Pens A Heart-Wrenching Note Stating, 'Aage Alfaz Nahi Rahe')

His dialogue, 'Main tha, main hoon, aur main hi rahunga' from his film, Haider, is the perfect way to describe his extraordinary life. In the official statement released by Irrfan’s wife, Sutapa Sikdar, their son, Babil had quoted himself as “Learn to surrender to the dance of uncertainty and trust your faith in the universe.” Babil has although surrendered himself to the uncertainty, it is never easy to get someone close out of your heart. He is keeping his late father alive in the hearts of people by constantly sharing his stories and pictures.

On June 18, 2020, Irrfan Khan’s son, Babil Khan took to his Instagram handle to share a picture of himself, where he acknowledges the fact that he looks exactly like his father and how the world has been saying the same to him. Sharing a picture, Babil wrote, “Oh my god, you look just like your dad!” Indeed, the picture will make you say so! Take a look at the picture shared by Babil and Irrfan Khan's younger picture:

Irrfan had shared a warm and friendly relationship with his sons, Babil and Ayaan. In a 2017 interview, the legendary actor had revealed how he had reacted on seeing 'love bite' on his son, Babil's neck! The 'daddy cool' had revealed his reaction on his son, Babil's love life. He had said, "My kids are very open with me. When I saw a love mark on his neck and confronted him about it, he said, ‘no it’s not that, it is a rash.’ I said to him Beta congratulations. (laughs)." He had further emphasised on the importance of making kids comfortable with sharing everything with parents. (Don't Miss: Tusshar Kapoor Reveals How His Son, Laksshya Kapoor Is Getting Time To Bond With Grandparents)

Irrfan had talked about discussing intimate topics with kids and had said, "Just tell them (kids) it is natural. If you are not being curious about it, then there is something wrong with you. If you are curious and want to explore, please go ahead and this is the way life is. This is the best gift nature has given to you. Explore it. Explore it in a way that you don’t hurt anybody. But, find its potential." In Irrfan's opinion, two people getting together is a wonderful thing if it is not made into a commodity. Irrfan had also shared his experience from when he was a teen and had cited that he was never embarrassed to discuss such things with his mother.

After the demise of Irrfan Khan, his son, Babil had taken to his Instagram handle and had thanked everyone for their condolence messages. He had shared an Instagram story with a note that could be read as "I'm deeply grateful for all the condolences you beautiful friends are pouring in for me. Although, I hope you understand that right now I'm not being able to reply because my vocabulary is dizzy. I will get back to each one of you but just not right now. Thank you so much! I love you." (Recommended Read: Divyanka Tripathi Dahiya Shares A Birthday Wish For Her 'First Teacher' Elder Sister, Priyanka)

Don’t you think that they look exactly like each other?

There's a reason why one of the greatest filmmakers of the modern cinema, Tigmanshu Dhulia, considers late Bollywood actor, Irrfan Khan as the best actor ever in the history of Indian cinema. With no disrespect to legends like Dilip Kumar, Dev Anand, Rajesh Khanna, Amitabh Bachchan, and many more, there