The immensely popular Indian sitcom, 'Bhabiji Ghar Par Hai' has been one of the top shows in the TRP charts. Let's take a look at the real-life families of the cast of the show.

The popular television show, Bhabiji Ghar Par Hai! is one of the most-watched Hindi comedy shows and is quite popular among the masses. The show is based on the lives of two neighbouring couples, the Mishras and the Tiwaris, where the husbands are attracted to each other’s wives and try their best to woo them. But all their attempts to impress each other’s wives (bhabhis) lead to hilarious situations. The show was first aired on March 2, 2015, and has successfully completed more than 1500 episodes now.

Inspired by the popular Hindi sitcom from the '90s, Shrimaan Shrimati, Bhabiji Ghar Par Hai! has garnered a lot of love from the audience from its first episode itself. The craze of this show has surpassed all other sitcoms. The characters of the show leave no stone unturned to make the audience go ROFL. Be it Angoori bhabhi (Shubhangi Atre) or Vibhuti Narayan Mishra (Aasif Sheikh), the audience loves and follows them on social media to know every detail about their personal lives. So, for all Bhabiji Ghar Par Hain! fans, here's the list of the real-life partners of the popular characters of the show.

Saumya Tandon Reveals Her Secret Behind Balancing Work And Family, Talks About Her Comeback

Also Read: 8 Nanad-Bhabhi Jodis Of Television Who Are Like Sisters From Different Mothers 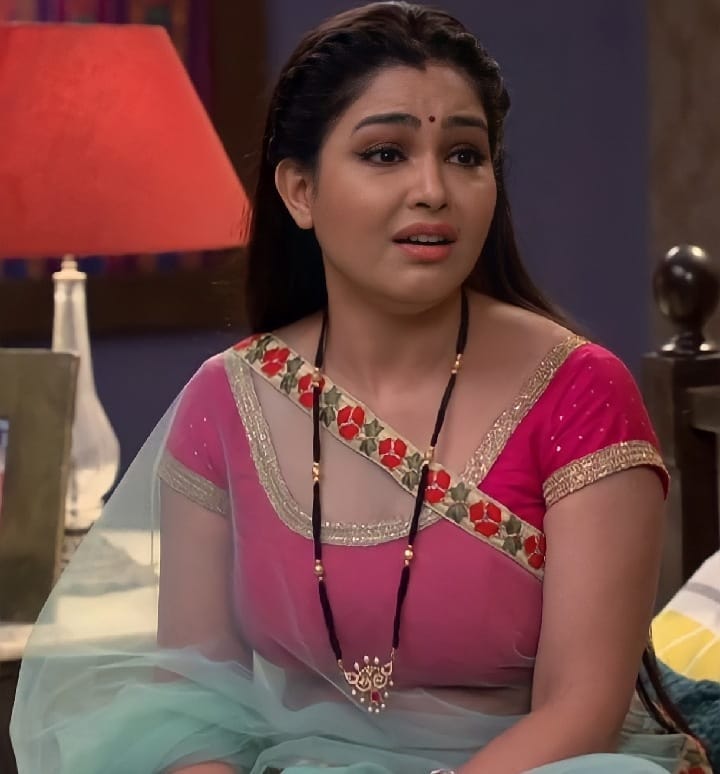 Shubhagi Atre Poorey, who plays the titular role of Angoori bhabhi, is married to a businessman, Piyush Poorey. Shubhangi had gotten married to Piyush at the age of 19 in the year 2000 and the couple has a daughter named Aashi. Shubhangi always wanted to pursue acting and it was Piyush, who always supported her dreams. At the beginning of 2019, there were reports of trouble in Shubhangi and Piyush’s paradise, but the actress had refuted the same by calling them baseless. 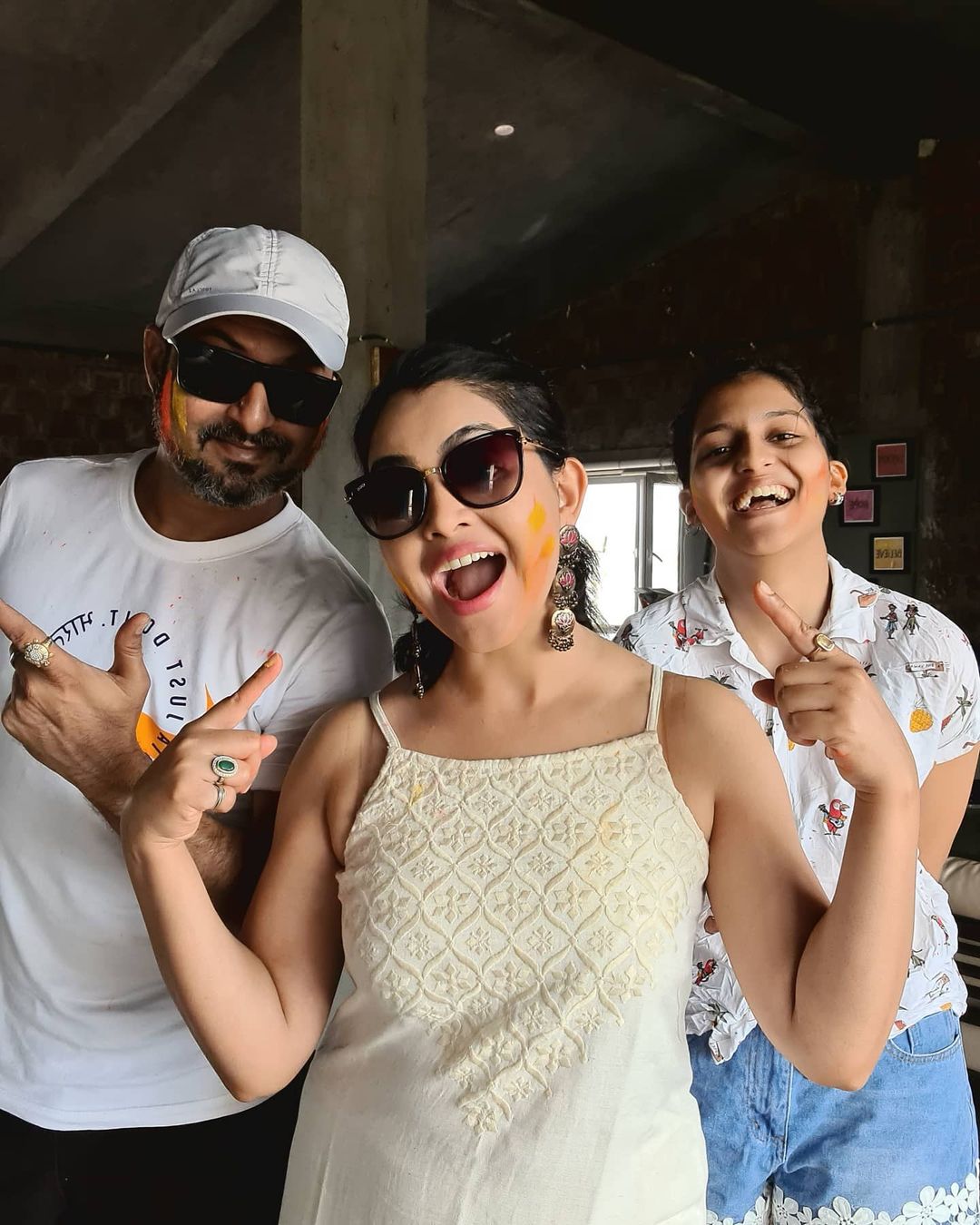 Shubhangi had started working after the birth of her daughter, Aashi. She had gotten her first break in 2006 in Ekta Kapoor’s popular show, Kasautii Zindagii Kay. She was later seen in shows like Kasturi, Havan, Chidiya Ghar and Adhuri Kahani Hamari. In 2016, Shubhangi had replaced Shilpa Shinde in Bhabiji Ghar Par Hain! and has been playing the role of Angoori bhabhi since then. 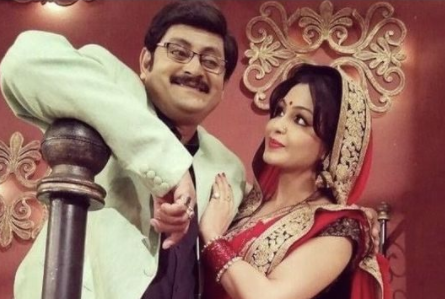 Rohitash Gour, who has won our hearts with his role as Manmohan Tiwari a.k.a., Tiwari bhaiya is married to Rekha Gaud, who is a cancer researcher by profession. The very simple, Rekha Gour was spotted with her hubby, Rohitash Gour at some events. The couple is blessed with two daughters, Giti and Sanjiti. 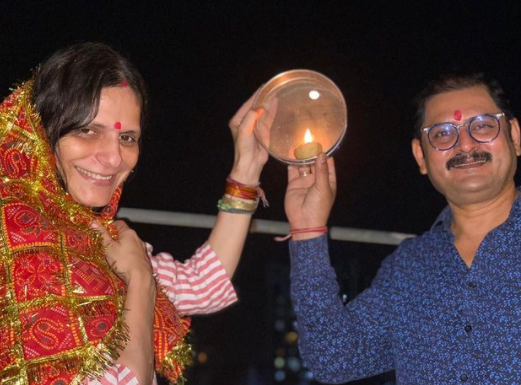 Apart from TV shows, Rohitash Gour was seen in movies like Pinjar, Dhoop, Munnabhai MBBS, Lage Raho Munnabhai, A Wednesday, and Atithi Tum Kab Jaoge. He had last appeared in Aamir Khan starrer PK, where he had played the role of constable Pandey ji.

Recommended Read: From Kapil Sharma To Kiku Sharda, Meet Real-Life Partners Of The Cast Of 'The Kapil Sharma Show' 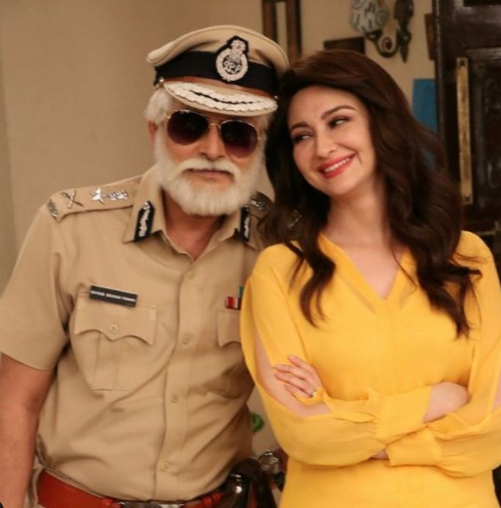 Saumya Tandon, who is also known as gori mem had gotten married to her boyfriend, Saurabh Devendra in December 2016. On January 14, 2019, the couple was blessed with a baby boy, whom they have lovingly named Miraan Tandon Singh. In August 2020, Saumya had revealed that she had quit the show due to the COVID-19 pandemic. She had stated that she didn’t want to risk her elderly parents and son’s lives. Saumya’s role was taken by actress Neha Pendse in 2021. 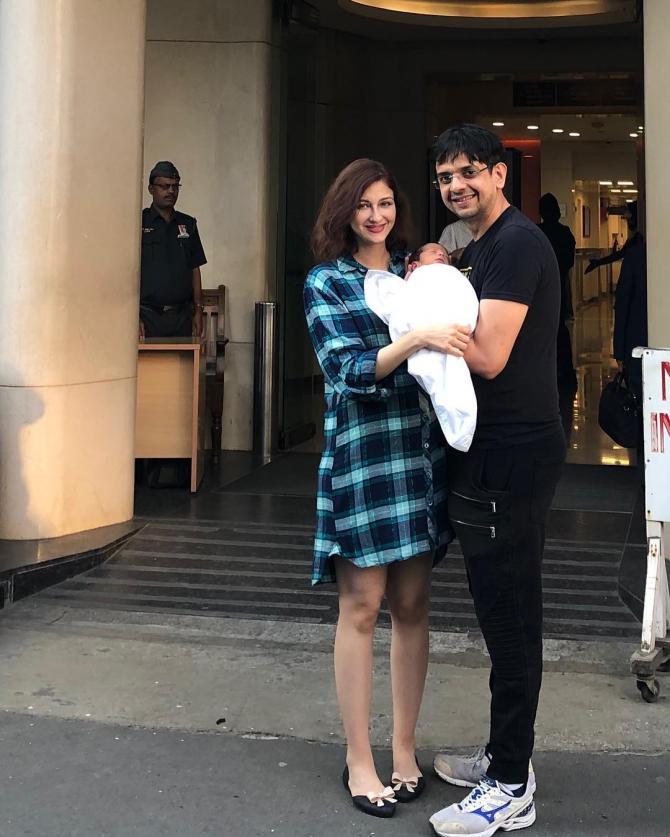 Talking about Saumya’s work front, she had started her career as a model and was also the “Femina Cover Girl First Runner Up” in 2006. She was seen in shows like Aisa Des Hai Mera and Meri Awaz Ko Mil Gayi Roshni. She had co-hosted Zor Ka Jhatka: Total Wipeout with Shah Rukh Khan, Dance India Dance, Bournvita Quiz Contest with Derek O’Brien. She had also played the role of Kareena Kapoor’s sister in Imitiaz Ali’s movie, Jab We Met. 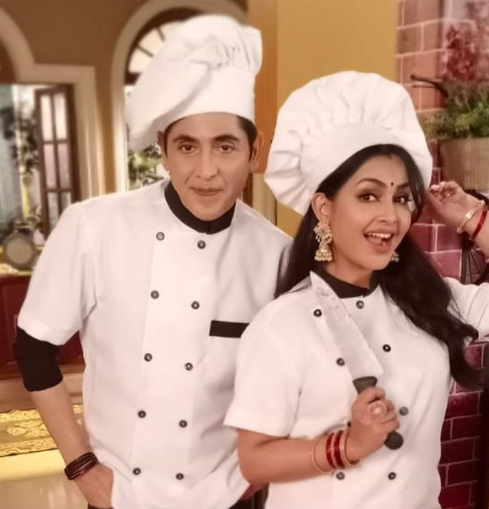 Aasif Sheikh is considered as one of the most handsome actors of telly world. His co-star and on-screen wife, Saumya Tandon had once described him perfectly as “18 till he dies” and there is no doubt to it at all. It was in 1992, when Aasif Sheikh had gotten married to the love of his life, Zeba Sheikh, who is a homemaker. Aasif and Zeba are proud parents to a daughter named, Maryam Nastasia and a son, Alyjah Iman. Aasif is a complete family man, who loves spending time with his wife and children. 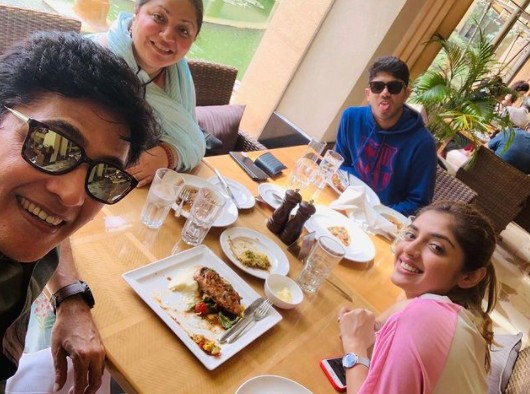 Aasif Sheikh had begun his acting career in India’s first daily television show, Hum Log. He is also famous for portraying the character of ‘MD Vinod Verma’ in the Indian sitcom, Yes Boss. Apart from television shows, Aasif is a renowned name in the world of theatre and has also appeared in several Bollywood films.

Recommended Read: From Reel To Real, 12 'Nach Baliye' Jodis Who Got Married After The Dance Reality Show 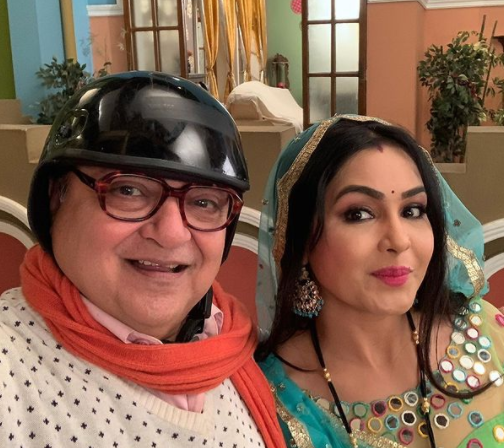 Rakesh Bedi, who plays the role of Angoori bhabhi’s alcoholic father, Bhoorey Lal is married to Aradhana Bedi. The couple is proud parents of a daughter, Ridhima Rakesh Bedi. Rakesh is one of the recurring characters on the show, who hates his son-in-law, Manmohan Tiwari and prefers Vibhuti Mishra instead. 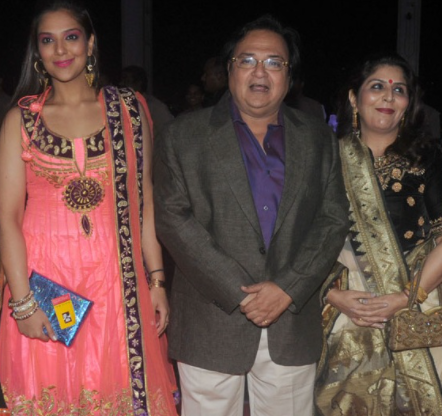 Rakesh Bedi is a very popular name in Bollywood and telly world. He is majorly known for his comic roles in shows like Shrimaan Shrimati, Hum Sab Ek Hain, Yes Boss and Taarak Mehta Ka Ooltah Chashmah. Some of his memorable roles in movies include Chashme Buddoor, Ek Duuje Ke Liye, Hero No. 1 and Hadh Kar Di Aapne. 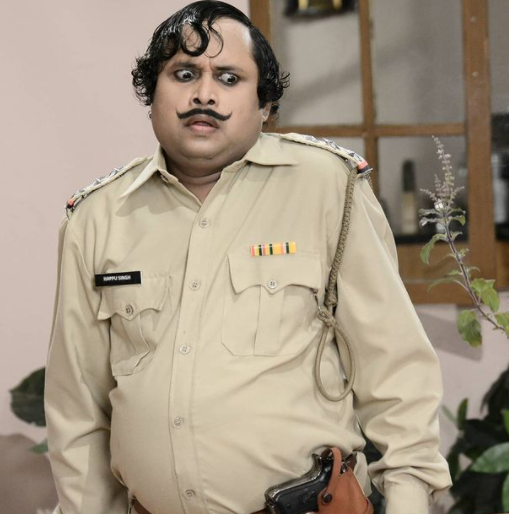 The corrupt officer, Daroga Happu Singh, who secretly crushes over Anita Mishra, is married to Sapna Tripathi. Despite being a recurring character in the show, Yogesh’s role is quite popular and had garnered him a lot of applause. The best part about him is that he credits his wife, Sapna for being his pillar of strength. Yogesh and Sapna are proud parents of a baby boy. 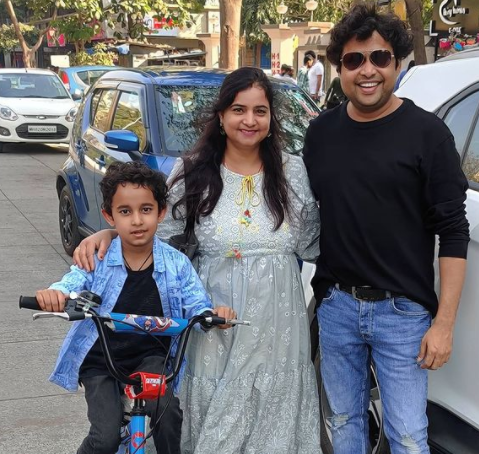 Talking about his professional front, Yogesh had struggled for two years in Mumbai and had gotten his first break with a Chlormint advertisement in 2007. He had also played various characters in the show, FIR and had also featured in shows like Lapataganj, Sahib Biwi Aur Boss, Jijaji Chhat Per Hain and Happu Ki Ultan Pultan.

Each and every character of Bhabiji Ghar Par Hai! plays a vital role in the show and has become an integral part in the lives of their audiences. From Angoori to Vibhuti, each character has carved a special place in our hearts and getting to know about their family has only brought us closer to them.

Also Read: 15 Bollywood And TV Celebrities Who Are An Exact Copy Of Their Sibling That It Is Unbelievable

Saumya Tandon Reveals Her Secret Behind Balancing Work And Family, Talks About Her Comeback