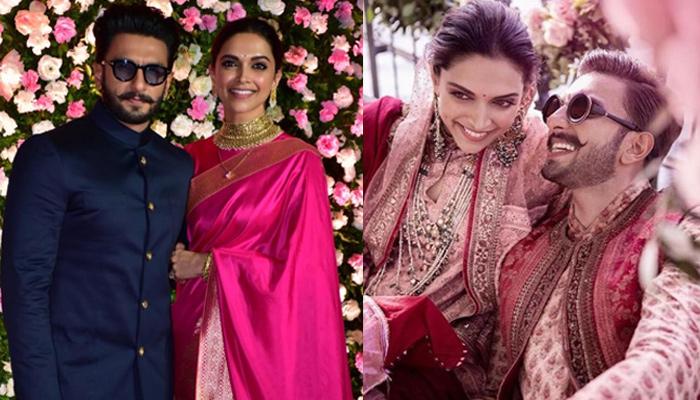 “Pyaar karna koi inse seekhein” is what everyone has been saying ever since we have seen our Ram-Leela, Deepika Padukone and Ranveer Singh rock the screens with their phenomenal chemistry in 2013. It was only on October 21, 2018, that they proved us right and shared their official statement which comprised of the details of their marriage and we couldn’t have been happier! (Do Read: Baby's Day Out, Taimur Ali Khan Steps Out On The Streets Of London With Family, Pictures Inside)

How badly Ranveer is in awe of Deepika is not unknown to people. Innumerous times, this powerhouse of energy has given the world some serious 'then boyfriend-now hubby goals' to all the men out there, and have shown to the world how his lady should be treated. In fact, Ranveer’s upcoming film, Simmba’s promotions had a lot to offer when it came to expressing his hubby goals or his love for Deepika.

One of the latest promotional spree largely indicated so. The songs of the film had already gained huge popularity, even before the film’s release and another song, Mera Wala Dance, recently added to the list. On the release of that song, a journalist asked Ranveer a question pertaining to the film and Ranveer looked lost. When the journalist repeated the question again, an all-confident newbie hubby replied, “Sorry, main Deepika ke khayalon mein khoya hua tha!” and all the stars present there, including Sara Ali Khan and director Rohit Shetty burst out in truckloads of laughter! Here’s the fun video:

Isn’t it amazing? Undoubtedly, Ranveer is the happiest hubby in the world! Why do we say so? The man is never out of tareefan for his married life and his wifey, Deepika whenever he is asked about the same. In a chat session on India Today Conclave, Ranveer shared that marriage makes him feel like a superhero! He was quoted as saying, “I feel like I am flying. Marriage is like the best thing that’s ever happened to me. Wow, I feel some kind of magic, some kind of power, I feel invincible, you know in superhero movies, that moment when the suit comes on, I feel like marriage has done that to me. I feel like I’ve grown up now, finally, I am a man. I feel grounded, I feel secure. I’m really loving it, it’s been only 10 or 15 days. it’s so nice, it’s so lovely. I would highly recommend it.”

It was Kapil Sharma and Ginni Chatrath’s star-studded wedding reception on December 24, 2018, and needless to say, we saw many stars grace the occasion with their presence. Ranveer and Deepika, too had arrived for the same and looked ethereal donning their bests. An on-set flamboyant Kapil Sharma, who fondly calls Deepika, ‘Deepu’, had his heart broken on his reception! Wondering how? When the Bhavnanis went upto congratulate Kapil and Ginni, Ranveer took a dig at Kapil and told him, “Main teri Deepu ko le gaya!” Also, a heartfelt gesture of Kapil blew the minds of Ranveer and Deepika away! On his own wedding reception, he made newly-weds Deepika and Ranveer cut a cake! Checkout a video of the same: (Must Read: Riteish Deshmukh Is Awestruck At Wife Genelia For A Valid Reason, Feels Thankful For Marrying Her)

A live-in relationship is quite a common phenomenon these days. Deepika who has been staying alone and away from home for quite a while was sure that she didn’t want a live-in relationship with Ranveer. In her first interview with GQ post her wedding, the Cocktail star shared, “Well, I’ve been running a home since I was 18, so I don’t think much is going to change in that sense. But of course, we’ll go through all the changes that happen when two people start living together. I was clear right from the start that I didn’t want to have a live-in relationship to figure out if I wanted to marry someone or not. Now [I’m expecting] everything that comes with being a newly-wed: sharing space, you know, or the bills, whatever it takes for two people to live a life together."

Aren’t Ranveer and Deepika one of the cutest couples ever? We wish them an eternity of happiness.