Baby's Day Out, Taimur Ali Khan Steps Out On The Streets Of London With Family, Pictures Inside

Baby's Day Out, Taimur Ali Khan Steps Out On The Streets Of London With Family, Pictures Inside ‘He is a little ‘gigglebot’, that’s designed to laugh a lot, every program he runs, fills everyone’s heart with tonnes of joy..’ By now you must be cleared, who we are referring to, yes, it’s none other than our favourite Taimur Ali Khan or baby Tim as he may like us to call him. The star-kid is currently vacationing in London with mommy, Kareena Kapoor Khan, and daddy, Saif Ali Khan. (Recommend Read: Janhvi Kapoor Apologises To Smriti Irani For Calling Her 'Aunty', Here Is How Fans Reacted)

And we got hold of our little Tim-Tim’s cute picture while he is enjoying a bright sunny day on the streets of London with mommy and daddy. Taimur looked ridiculously adorable in a sky blue hooded bomber jacket with dark hue jeans and boots. On the other hand, Saif looked handsome in a white biker’s jacket with gloves and a cap. In another picture, we spotted Kareena holding her little bunch of joy, and how lovingly Taimur looks at her. Take a look at the pictures below:

After celebrating Christmas with Kapoor and Pataudi clan in India, Kareena Kapoor Khan and Saif Ali Khan jetted out for spending their rest of the vacations in London. Recently, we got hold of our favourite munchkin's first picture where he is riding a bicycle. He looked super cute in a blue and grey zipper sweatshirt with side-parted hair. (Also Read: Riteish Deshmukh Is Awestruck At Wife Genelia For A Valid Reason, Feels Thankful For Marrying Her) 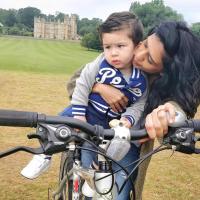 The family left for the airport in style. While Kareena looked stunning in a black leather jacket and denim which she paired with black boots, Saif, on the other hand, looked dapper in a blue Nehru jacket. Baby Tim, who seemed sleepy, was cuddled comfortably in his nanny's arms. Check out the pictures below:

In an earlier interview, Saif revealed how he is trying to inculcate values in little Taimur. He had said, “You have to sit him down, the minute he can understand it. And it'll start with calling the people at home and not yelling. It'll be manners, it'll be Please, Thank You, Aadaab. It'll be discipline from a young age. At least we know these things. These Bombay kids are out of control. He'll be very well behaved. And honestly, if he does his namaste right, he'll score points. Have you seen Sara's aadaab when she was younger? This is it. This is what we need, a nice aadaab from Tim. Tim by the way.” (You May Also Like: Miss India Earth Hasleen Kaur Ties The Knot With Boyfriend In A Private Ceremony, Pictures Inside)

Revealing how travel has changed for them ever since Taimur’s birth and what kind of holidays they take and the experiences they want their little one to have, Saif shared in an interview with Conde Nast Traveller, “Despite having the idea of trying different things, we’ve ended up (and my wife is quite annoyed about this) going to the same places and doing the same things every year—London in summer, Gstaad in winter, with some parts of India, like Rajasthan and Pataudi, in between. We would have liked to go to more places in Italy and France—and we will. But you know, there is also something comforting about going to the same places, because the people know you and the hotel feels like home. With Taimur, we also end up travelling with a bit of an entourage. We never travelled light, but after Taimur, we travel even heavier." 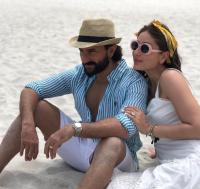 When mommy, Kareena was asked to comment on the paparazzi's obsession over her munchkin, she replied, "I feel Taimur is getting used to his name being called out [by paparazzi] and not particularly the cameras around. I don’t think he can make out that he’s being clicked. He’s still too small for that right now.” She further added, “Honestly, I’ve never held back anything. He’s practically all over the place. But he’s just 17 months old, so, let him grow up and have his life. I want him to have a normal upbringing and I totally understand that it’s tough to have it in today’s time but it is okay. I am letting him be. I can’t stop him from anything and I will not stop him from having a normal life at all." (Don't Miss: Janhvi Kapoor To Jacqueline Fernandez, Most Stylish Outfits To Steal For Your BFF’s Wedding)

Aww, we love our baby Tim, what about you?