Miss India Earth Hasleen Kaur Ties The Knot With Boyfriend In A Private Ceremony, Pictures Inside

Miss India Earth Hasleen Kaur Ties The Knot With Boyfriend In A Private Ceremony, Pictures Inside 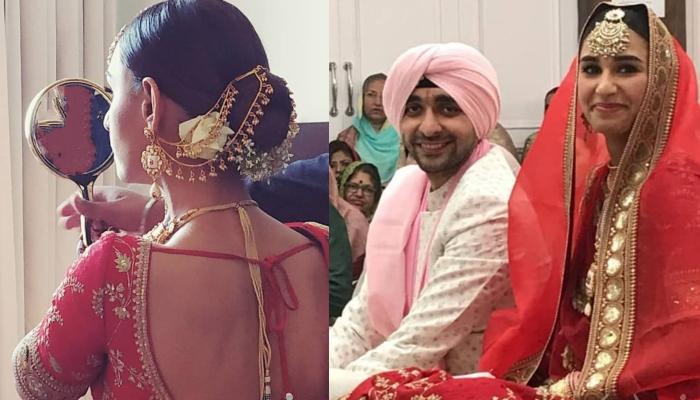 The common thing in B-town this year is celebrities getting married. After an array of celebrities found their love this year, from #DeepVeer to #Nickyanka, we heard another wedding bell. This time it is former Miss India Earth, Hasleen Kaur who tied the knot with longtime boyfriend, Amber Rana in a traditional Sikh ceremony on December 23, 2018. (Recommend Read: Janhvi Kapoor Apologises To Smriti Irani For Calling Her 'Aunty', Here Is How Fans Reacted)

The pre-wedding celebrations officially began on December 21, 2018, with a cocktail and a mehendi ceremony. Hasleen looked stunning in a chikankari ensemble from the designer, Abhinav Mishra's collection that stole the show. She took to her Instagram to share a picture of her bride tribe and captioned it, "@abhinavmishra_  I can’t Thankyou enough for making my mehendi such a stellar function yesterday. And for providing me with everything. Very few people are blessed to have friends like you. And @varunpratap_. Thank you for being the backbone of all of this. We really missed you yesterday. I wish you were there to see your idea turn to reality. It truly was such a beautiful evening. My only and most beautiful memory or a pre-wedding function was made a fantasy like real because of you. Vanshika you’ve been so patient through all of this and coordinating with my friends. I know it’s not easy. But you took such loads off me. I’m grateful  In times like these you realize who the angels in your lives are, you all were god sent for me. My parents and the whole family is praises for the way everyone looked thanks to this BIG sponsorship." Check out the pictures below:

Hasleen got married in a traditional Sikh ceremony and it was closed affair with family and friends. Check out the pictures below: (Also Read: Sara Ali Khan To Play Her 'Crush', Kartik Aaryan's Reel Lover In Dad, Saif Ali Khan's Movie's Sequel)

In an interview with Times of India, Hasleen revealed that after the wedding she will not stop working. She said, "I will keep traveling between the two cities. Delhi, like always, will remain home, but will have to travel to Mumbai for work." Her friend from the pageant time, Jyotpriya said, "We know each other since the time she participated in the Miss India pageant in 2011. We contested together and became good friends. Later, we worked together as models in many shows." Hasleen made her debut with Karle Pyaar Karle and entered the glamorous world of films. In an earlier interview, Hasleen revealed that how people had a misconception that models cannot act. She said, "Models are as human as any other person who starts out fresh and goes to acting school or does theatre. Models just choose to pose or walk on a ramp instead. But that is also role-playing. No model is herself on camera... she can't be. She is given the role of making a garment or a brand work and that is hard too," She further added, "After Miss India, Bollywood seemed like the best space to be in to showcase my skills and also become a part of one of the most glamorous fields in the world today. Besides, Bollywood has become very open to new faces and talent. One can experiment and pick up different characters rather than getting stereotyped." (Don't Miss: Riteish Deshmukh Is Awestruck At Wife Genelia For A Valid Reason, Feels Thankful For Marrying Her)

We wish the Hasleen and Amber a lifetime of happiness! Stay tuned for more.