South star, Ram Charan is spending time with his ‘grandma’ in the lockdown and adding some new skills to his hat. Watch out the video inside! 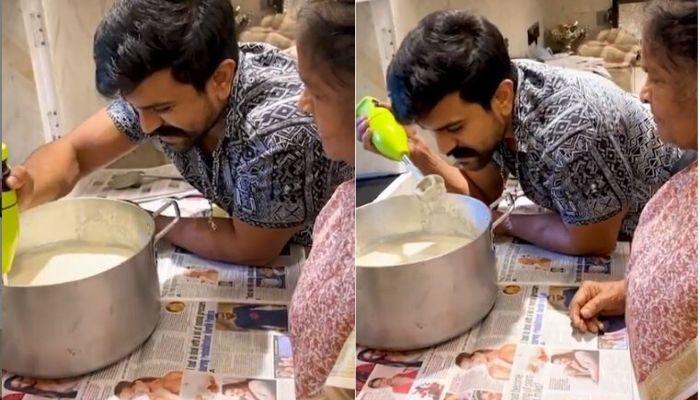 Remember the times when you used to sit with your grandmother and listen to her stories or just sit with her to watch her cook or help her cooking? Wasn’t that the best time of your life? Your elders shower you with so much love and affection from the moment they hold you, and you happen to have a very special bond with them. You tease them, but love them the most. You get irritated with their constant questions, but nothing can be more pleasing than being with her and acquiring some skills from her. South star, Ram Charan is also spending time with his grandma in this lockdown. (Also Read: Shah Rukh Khan's Daughter, Suhana Khan Secretly Captured Grooving And Singing Eminem's Song, Watch)

Ram Charan, being the son of superstar, Chiranjeevi, and also being a successful actor himself prefers to stay grounded. The actor, who is an introvert, does not like to share his personal life with everyone. Ram is married to an independent, confidant, businesswoman, Upasana, and probably this mixture of introvert and extrovert has made their marriage rock strong. As we said, Ram does not like to bring his personal life in the limelight, but this time, he has shared an adorable video with his grandmother, sharing a glimpse from his life during the lockdown. 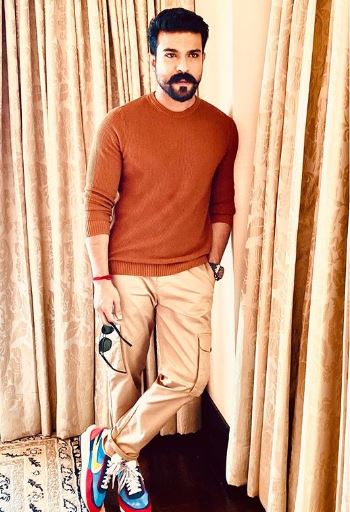 On May 1, 2020, Ram Charan took to his Instagram handle to share a video, wherein he can be seen trying to inherit some of the cooking skills from his grandmother. The actor can be seen blending the milk with his grandmother to yield out some fresh ghee. His mother also makes a small appearance in the video. Sharing the video, he wrote, “Learning to make fresh butter before buttering them #GrandmaRecipes #MomBoss.” Take a look at the video below.

This is not the first time that the actor can be seen helping his mother and grandmother or doing household chores. He has been working on the great initiative called ‘Real Man’ challenge, urging every man to step up and help their wives and mothers with the household chores. On April 21, 2020, South star, Ram Charan had taken to his Twitter handle to share a video which was a response to SS Rajamouli’s ‘Real Man’ challenge. In the video, Ram could be seen doing household chores like watering the plants, mopping the floor and making a cup of coffee for his wife, Upasana. Along with the video, the actor had written, “Done @ssrajamouli garu!! Let’s take pride in doing chores at home! Let’s be real men and help the women by sharing the work load. #BetheREALMAN I further nominate Trivikram garu, @Ranveerofficial, @RanaDaggubati and @IamSharwanand to take up the challenge.” (Recommended Read: Amitabh Bachchan Pens A Heartfelt Blog For His Late BFF, Rishi Kapoor, 'It Was Always See You Soon')

Let's take pride in doing chores at home! Let's be real men and help the women by sharing the work load.#BetheREALMAN

Ram Charan’s wife, Upasana Kamineni Konidela also had shared the same video of her husband, taking pride in him doing the chores, calling him a real man. She had captioned the video as “My man is a REAL MAN who believes in an equal relationship. Women are not glorified maids anymore. Communication strengthens any relationship. Be sensitive about ur partners feelings. swipe up from my story to heal ur relationship. @alwaysramcharan @urlife.co.in #betherealman." 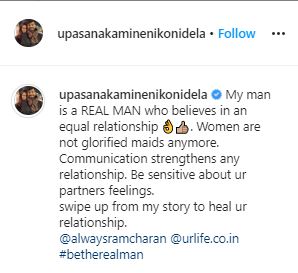 Talking about the love story of Ram and Upasana, the two had met each other in college and were thick friends, and had never thought of being more than friends. It was when Ram had travelled overseas, the duo had realised about their love as they had started missing each other. It was after the release of Ram Charan’s superhit film, Magadheera that the duo had started dating. On December 11, 2011, the couple had gotten engaged in Hyderabad. After one year, the lovely couple had gotten married on June 14, 2012, which was a close-knit affair attended by close friends and family, followed by a grand reception on June 15, 2012. (Don't Miss: Irrfan Khan's Wife, Sutapa Sikdar Releases An Official Statement, Says, 'He Has Spoiled Me For Life') Are you also spending your quarantine with your grandparents? Let us know!